This is the seventh in this year’s job market series.
Developing countries regularly underperform in their capacity to collect taxes, with tax revenue to GDP ratios that are 20 to 30 percent less than those of high-income countries (Besley and Persson, 2014). This tax capacity gap represents lost revenue that could have provided much-needed public goods and services while reducing reliance on foreign aid. This issue is especially relevant in Africa, where “shadow economies” comprise up to 75% of national GDP (Schneider and Enste 2000), indicating that large swaths of these countries’ populations manage to evade taxation. What accounts for this failure to convince citizens to pay taxes?

Many studies show these exchanges occur around election times, when political candidates distribute small gifts, cash, or food (Nichter 2008, Kramon 2016). Yet there is no reason to assume that voters simply forget clientelist appeals after elections end. Exposed to successive appeals over election cycles, they learn the rules of the game: those who voted for the winning candidate stand to benefit once the politician is in power, while those who voted in lesser numbers for the candidate stand to lose.

I argue that citizens apply this simple notion of expected gains and losses to anticipate how much they will benefit from tax revenue, particularly discouraging potential losers from paying taxes. Leading explanations for tax compliance emphasize taxation as a fiscal exchange: we pay taxes when we are confident we will get benefits in return (Levi 1988). By distorting perceptions of benefits, clientelism can have more enduring effects than previously thought, specifically on tax attitudes and tax compliance.

Estimating Effects of Clientelism on Tax Attitudes
If clientelist logic is indeed at work, then simply knowing how a community voted should change people’s expectations about their likely political treatment. Attributing these differences in expectations to the act of voting for the candidate in power is the central aim of my paper.

The survey experiment was conducted in Benin, a low-income democracy with well-documented clientelist practices (Wantchekon 2003) and weak local tax capacity. The survey features five of Benin’s largest southern municipalities, in a sample of 1,152 potential taxpayers including informal entrepreneurs.

I test the effect of clientelist logic using a survey experiment of people who live in municipal districts that voted just above, to those that voted just below, the average level of support for the incumbent mayor (up to a +/- 15% margin). The residents in these districts are unlikely to know, for instance, that their district voted 5% less for a politician than the average.

Treated respondents were told whether their municipal district voted just below or just above the average vote share for their mayor’s party; control respondents in the same district received no information. By measuring the differences between treated and control within each district, I ensure that any effect detected is a measure of treatment as opposed to other factors that vary across districts, such as service delivery, perceptions of corruption, or wealth.

I then tested whether receiving an information prime about relative voting shifted respondents’ 1) expectations of improved living conditions in their district, 2) expectations that their district will benefit from tax revenue, and 3) support for taxation. I measure support for taxation on a scale of 0 to 100 West African CFA francs, where the respondent selects the preferred amount in taxes that citizens should contribute to the municipal budget. A larger amount indicates a stronger pro-tax norm.

Results
I set out to answer two questions. First, did the relative vote information treatment produce corresponding positive and negative shifts in citizen attitudes within the same district? Second, did the treatment create significant differences in attitudes between respondents in just below- and just above-average districts?

Figure 1 presents the average effects of the information treatment within the same district. Respondents informed that their district voted less than average for the mayor reduced their expectations for public benefits and their support for tax, compared to those who got no voting information. The opposite held true for those who received the positive treatment. Simply knowing how their community voted made respondents more or less optimistic, depending on the prime. 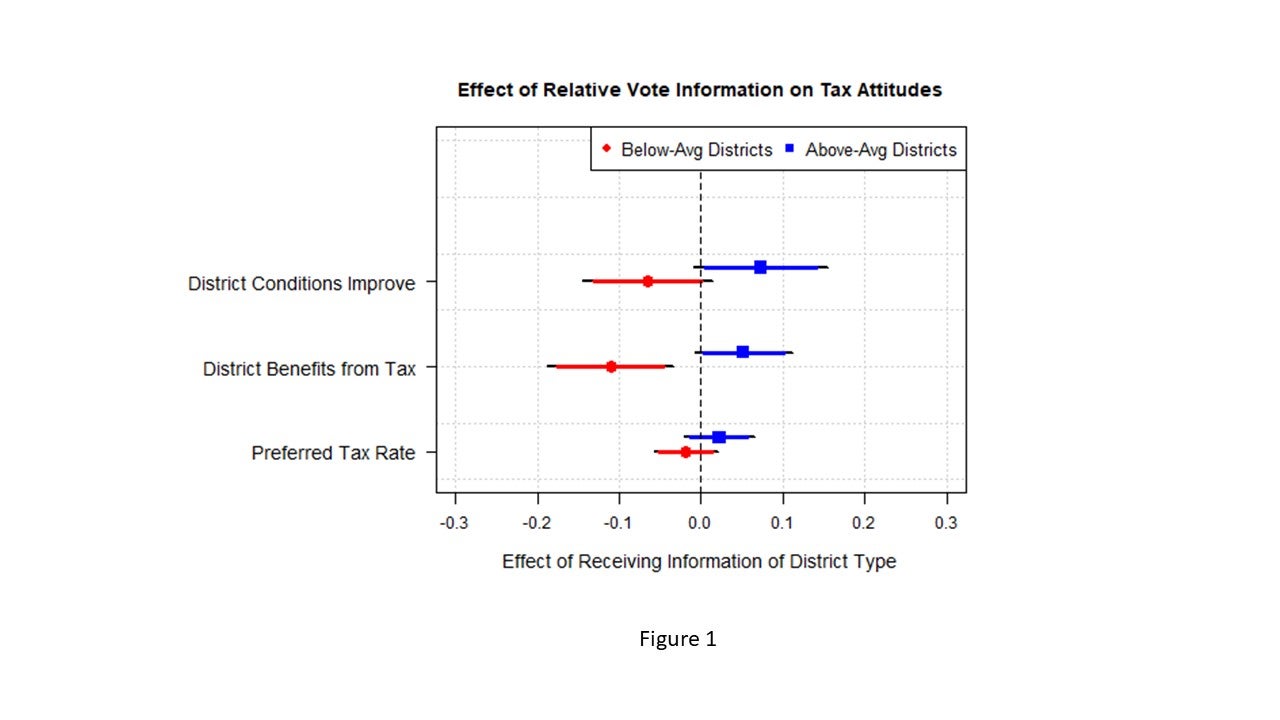 Next, I tested whether relative vote knowledge created differences across districts, by comparing attitudes in below- and above-average districts. Figure 2 presents comparisons in the control group, where respondents were not primed to think about how their district voted, versus in the treatment group, where they were primed. We see little difference in the control group. Below-average districts were actually more optimistic for one outcome.

In the treated group, when respondents were primed to think of their relative support for the mayor, residents of below-average districts score less on each attitudinal measure, compared to those in above-average districts. They were 9 percentage points less likely to expect their living conditions to improve, 7 percentage points less likely to expect their district to benefit from tax revenue, and thought residents should pay 4 CFA less towards their municipal budget than their counterparts. Anticipating less redistribution from the incumbent mayor and his party, they preferred to withhold more tax dollars from their governments. 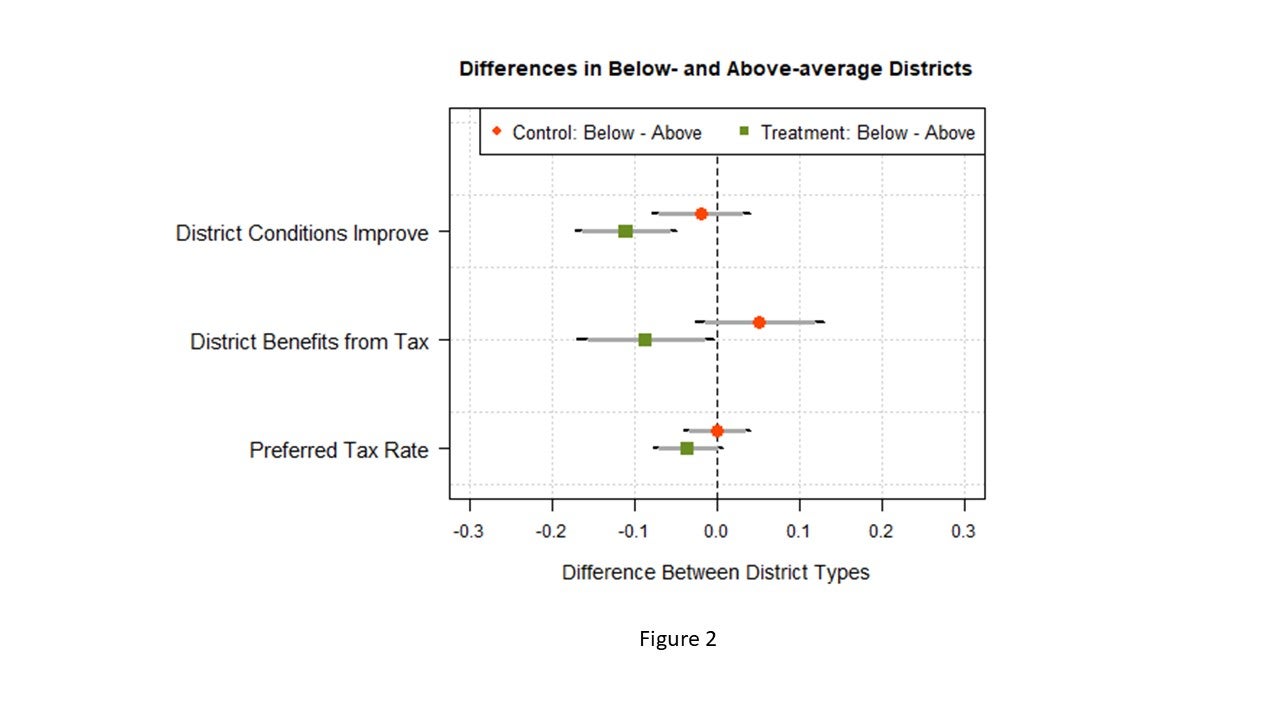 For perspective, an equivalent four percent decrease in locally generated revenue for Porto-Novo, the nation's capital, would be about 21 million CFA (37,600 USD) in 2014, or about twice Porto-Novo's 2014 spending on materials for infrastructure projects in the municipality at 12.3 million CFA.

Evidence for a Clientelism-Taxation Link
Citizens use clientelist logic to infer how politicians will redistribute more generally. They believe politicians’ promises to reward or punish communities for their vote, and decide whether to grant or withhold their support for state taxation accordingly. The paper thus offers one of the first causal links between clientelism and citizen tax attitudes.

Caveats remain. This study only offers a snapshot of citizen attitudes, and cannot make claims about how they persist over time. I do show that clientelist logic can be activated 18 months after municipal elections, in response to a relatively subtle treatment. The study also does not include behavioral measures of compliance, but as tax attitudes tend to predict tax compliance (Cummings et al., 2009; Feld and Frey, 2007), the paper offers a first step in testing the mechanisms driving tax behavior in clientelist developing countries.

The study’s results show that clientelism can encourage as well as discourage tax payment. This produces an unequal tax burden if only incumbent supporters are willing to pay (Kasara 2007). Successful interventions could increase the potential tax base of local governments, which typically struggle to collect revenue from large informal sectors already predisposed to evade taxation.

Sanata Sy-Sahande is a PhD candidate at Princeton University. You can read her job market paper here.

Interesting question, but I am not sure this kind of experiment can prove this kind of causal relationship. The experiment would need to encompass aspects affecting compliance as listed in 'determinants of tax compliance in SSA' by Fjelstad & co, and deal with competing issues such as perceived fairness, etc, to fully convince. Plus, isn't the following statement true of all democracies, not just strongly clientelist types? 'those who voted for the winning candidate stand to benefit once the politician is in power, while those who voted in lesser numbers for the candidate stand to lose'.