This is the third in this year’s series of posts by PhD students on the job market. The title of this post was updated on 4/30/2018.

Globally, civil liberties and political rights have been declining for eleven consecutive years (Freedom House, 2017). The erosion of these measures runs counter to a priori expectations that circumstances would improve: the number of democracies had doubled within the past five decades and information is increasingly available to voters due to a growing and diverse set of media sources. The presence of more accessible information has been linked to improved political accountability, a fundamental factor of development (Drèze and Sen, 1989; Besley and Burgess, 2002). On the other hand, increased access to information is also believed to polarize voters, offering a possible explanation for the backsliding of democratic norms (Downs, 1957; Gentzkow and Shapiro, 2011). In my job market paper, I show that experimentally varied exposure to the same information in a partisan campaign polarized vote choice on weakening the system of checks and balances in Turkey.

The existing empirical research on political polarization assumes that people self-segregate ideologically to different sources of information (Sunstein, 2001; Gentzkow and Shapiro, 2011). However, theoretical efforts to understand the implications of increased information access often relax the traditional assumption in economics that people have common beliefs or priors.  Once relaxed, it has been shown that disagreement can occur, increase, and persist in response to the same information (Piketty, 1995; Dixit and Weibull, 2007; Andreoni and Mylovanov, 2012; Acemoğlu et al., 2007).

There is an absence of empirical evidence supporting the theory that the same information can cause polarization. This distinction is of policy relevance to information interventions that aim to increase political accountability, most of which assume voters will converge to a common signal.

Context: Referendum after a coup attempt

This study addresses this issue using a field experiment that was implemented before the referendum in April of 2017 on an institutional change to weaken checks and balances in Turkey. I spent more than a year engaged in fieldwork during a period of conflict, high terrorist activity, and mass arrests. The duration of my time there allowed me to build institutional knowledge and strategically time the implementation of the experiment; it was conducted right before the referendum, which was scheduled just months after the attempted coup in July of 2016.

In this study, I designed a randomized door-to-door campaign that was implemented by the opposition. The party's strategy in the campaign was to give voters information on the economic conditions and increased terrorist activity under the incumbent. Voters were also told to choose “No” in the referendum. The party assumed that voters have a noisy signal of deteriorated conditions in an environment with high media censorship. Their voter information campaign was meant to increase the precision of the signal and voters who underestimated bad conditions would be more likely to vote “No.”

In designing the experiment, I took into consideration that the same campaign information could instead be interpreted differently by voters based on survey evidence that I had access to. Survey results show that voters who self-reported an affiliation to the incumbent attributed poor conditions to factors outside the control of the leadership, such as the attempted coup, the U.S. elections, and the global recession. In contrast, opposition supporters blamed the incumbent party.

For illustrative purposes, and consistent with the survey results, consider that the two factors, incumbent quality and national security (i.e. low external threats), are both positively correlated with good conditions. However, they have an opposing relationship with the voters’ optimal level authoritarianism, which determines vote choice. The optimal level of authoritarianism is increasing in incumbent quality and decreasing in the level of national security. In the latter case, authoritarianism may be a preferred policy when times are bad due to external threats because policies can be implemented more efficiently and intensely.

In response to new information on poor conditions, voters update their relative priors of these two factors to determine their vote choice. One type of voter who underestimates bad conditions, and is more uncertain that the incumbent is to blame relative to external factors, can switch from voting “Yes” to “No” in response to the campaign information. The opposite is true for another type of voter who also underestimates how poor conditions are, but is more uncertain that external factors are to blame relative to the incumbent. In summary, rational Bayesian voters with different views, but a similarly noisy signal on economic and terrorist activity conditions, can make opposing choices in the referendum in response to the same partisan campaign information.

In this framework, voters' responsiveness to new information depends on whether the voter is moderate, as determined by a small differential in mean priors between the two factors affecting vote choice.

Randomization was done at the neighborhood-level so that administrative voting data could be used. I stratified the randomization of treatment by quartiles of past vote share. This allowed me to test whether the campaign had an effect where the concentration of moderate voters is highest. I also pre-specified a test of the treatment in each quartile to detect whether the campaign had countervailing effects on vote choice. 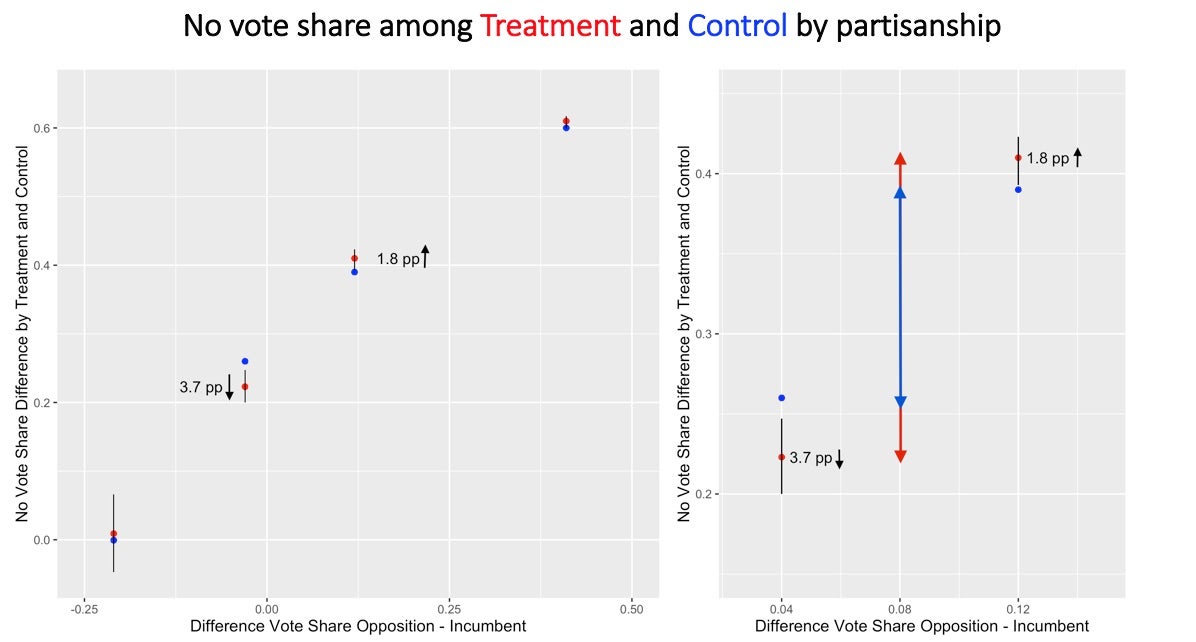 Importantly, these effects cannot be attributed to mobilization. In each quartile, the treatment effect on turnout is close to zero.

Contribution of the main results

In this study, I provide experimental evidence of information-driven polarization in response to a common signal outside of a lab. Moreover, the effect is on vote choice over an actual policy that directly affects the long-term economic development of Turkey. In response to the same information, voters further disagreed about whether increased authoritarianism is desirable.

One of the limitations of this study is regarding the interpretation of the treatment. I am able to rule out that the two different voter types completely discounted the information being provided because of uncertainty in the source of the information. However, it is possible that the observed effect is driven by a visceral response. In this case, a voter who was planning to vote pro-incumbent (opposition) and switched to anti-incumbent (opposition) was pleased (displeased) to see that the opposition showed up at their door.

Ceren Baysan is a Ph.D. student at University of California, Berkeley. You can read her job market paper here.

Very interesting! The link to the JMP is dead though.

The link at the top worked:https://www.dropbox.com/s/an9m4yfpg0pcl38/CBaysan_JMP.pdf?dl=1