This is the seventh in our series of posts by students on the job market this year.

The World Bank's latest Global Monitoring Report acknowledges the impressive progress achieved towards the realization of the Millenium Development Goals. The fraction of extremely poor individuals (earning less than 1.25 $ a day) has been halved between 1990 and 2015, primarily because of the robust growth experienced in low-income countries. Nevertheless, growth has been unequal in many countries, including China and Indonesia. In these countries, the middle class and the rich gained disproportionally more than what the poor gained. Many policy makers care about inequalities. This is the case of the World Bank that recently adopted, on top of "eradicating extreme poverty", a second goal: "boosting shared prosperity". Having twin goals raises the question of how these two goals are weighed and may present situations that requires the World Bank to trade-off between higher growth and lower inequality experienced by the poor. This is precisely the question tackled by my job market paper: when does unequal growth reduce income poverty?

Two main approaches are used for the measurement of income poverty. First, absolute measures aim at capturing whether individuals have enough resources to satisfy their basic needs. An absolute poverty line, such as the 1.25 $ a day line, has its threshold independent of standards of living. Then, relative measures monitor whether individuals are not excluded from engaging in the everyday life of their societies because they have insufficient resources.  A relative poverty line has its threshold evolve as a constant fraction of the average standard of living. The two approaches capture two different kinds of deprivation and each approach ignores the alternative kind of deprivation. As a result, absolute and relative measures make opposite extreme judgments on unequal growth. On the one hand, absolute measures evaluate growth positively, regardless of the additional resources' distribution. On the other hand, relative measures judge a reduction in the inequality experienced by the poor positively, regardless of the level of income earned by the poor. Measuring both forms of poverty in parallel does not solve the issue since, more often than not; the two approaches yield opposite conclusions. Rather, the solution is to use a unique measure based on an endogenous poverty line, i.e. a line making the trade-off between the absolute and relative aspects of income poverty. Influential authors have proposed interesting endogenous poverty lines (Foster 1998 or Ravallion and Chen 2011).

In order to construct a poverty measure, a poverty line must be combined with an index. My research studies which indices should be used in combination with endogenous lines. In empirical applications, the default practice is to use an index belonging to the popular Foster-Greer-Thorbecke (FGT) family, such as the Head-Count Ratio or the Poverty Gap Ratio. My research shows that the poverty measures obtained with this practice lead to highly counter-intuitive poverty judgments. For example, these measures deem Brazil poorer than Ivory Coast in 2010. This judgment could be seriously questioned given that mean income in Brazil was more than four times larger than that of Ivory Coast. Moreover, 23% of individuals in Ivory Coast lived on less than $1.25 a day but only 5% in Brazil.

The problem of using FGT indices with endogenous lines is that FGT indices attribute individual poverties that are based only on normalized income – the fraction of own income over the income threshold in the given society. For the endogenous line used in Chen and Ravallion (2013), an individual living on $1 a day in Ivory Coast has the same normalized income as an individual living on $3.6 a day in Brazil. Therefore, FGT indices attribute to these two individuals the same individual poverty, even if the former is extremely poor and the latter not. This is why these measures sometimes conclude that there is more poverty in middle- and high-income countries than in low-income countries. Such measures should not be used to evaluate unequal growth experiences as they over-weight the relative aspects of income poverty.

In the paper, I then apply a poverty measure based on the new index to World Bank data. As expected, the new measure deems Brazil less poor than Ivory Coast in 2010. The new measure is used to assess the evolution of poverty in several countries that experienced unequal growth over the period 1990 – 2010. The case of urban China is shown in the figure. The left graph decomposes the fraction of individuals below the endogenous line between those that are absolutely poor and those that are relatively poor. The right graph decomposes the value taken by the new measure between the respective contributions of absolutely and relatively poor individuals.  The figure shows that income poverty in urban China was reduced by about 75% over the period 1990 – 2010. By decomposing the measure, one can see that this improvement almost entirely rests on the drastic reduction in absolute poverty. Absolute poverty accounted for about two-third of income poverty in 1990, but less than 10% in 2010. This shows that if the main issue in urban China was absolute poverty in 1990, it has become relative poverty in 2010. 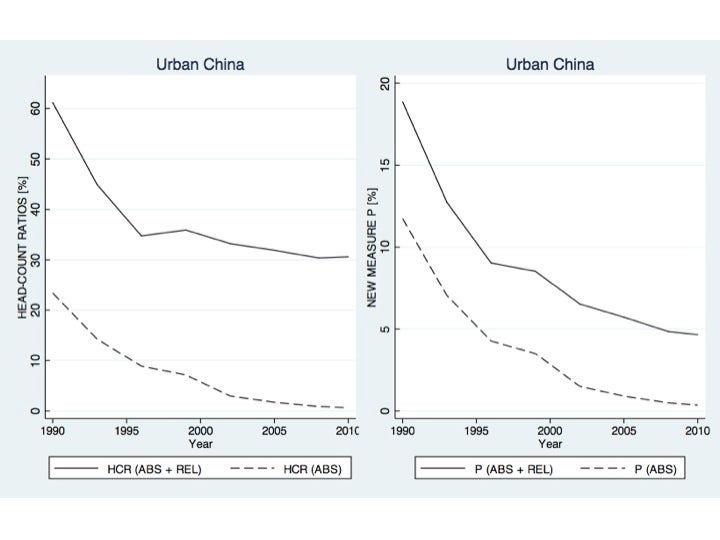 The application to different countries shows that the measure may yield very different judgments on unequal growth. In general, the evaluation of unequal growth by the new measure strongly depends on the initial importance of absolute poverty. In other words, the new measure is more likely to conclude that unequal growth alleviates poverty in countries where absolute poverty is predominant than in countries where relative poverty is predominant. As a consequence, the evaluation of any growth policy will depend on the prior as to whether absolute or relative poverty is the more pressing issue in that context.

Benoit Decerf is a PhD candidate in a joint program with the Catholic University of Louvain and Beilefeld University.