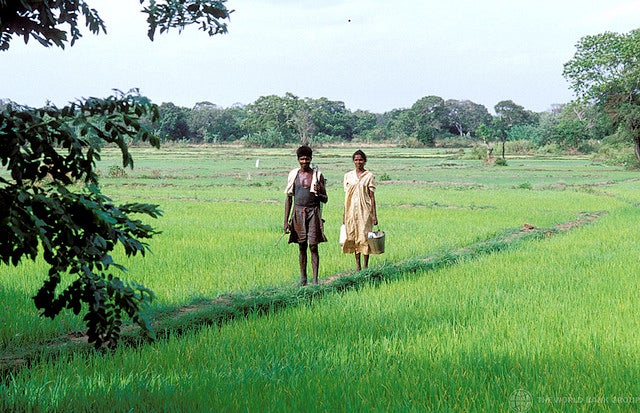 This blog looks at the job creation in the fishery sector in the Eastern Province of Sri Lanka, after the ending of the armed conflict in this province in 2007. The Eastern Province is a resource rich province. It has huge areas of inland water.

​Traditionally, fishing has been a main economic activity given its 420 kilometers of coastline. Moreover, 5.5% of the province is covered in irrigation tanks and canals. In 2013, 21% of the total population of about 1.5 million in the province were living in fishing households.

The Eastern Province is ethnically the most mixed province in the country, with Tamils, Muslims and Sinhalese comprising 40%, 38% and 22% of the population respectively.  The armed secessionist conflict left Eastern provinces in economic disarray. Most of the economic infrastructure in this region was destroyed or damaged, and the traditional livelihoods of individuals were disrupted.  In 2007, around 4% of the population was displaced due to the conflict and a further 2% was displaced due to the tsunami that took place in December 2004, Department of Census and Statistics data show.

The ending of the war in 2007 in the Eastern Province, paved the way for development. But, the conflict had left the region vulnerable and fragile, making employment generation a challenge. A primary barrier for employment was security. Intermittent attacks by LTTE rebels made it necessary for the government to keep a large security force in the East (International Crisis Group, 2008).  The tensions between the Tamils and the Muslims over security and land continued (International Crisis Group, 2008). Despite the ending of the armed conflict, the heavy presence of the forces, periodic disappearances of people and politically motivated killings left the community insecure. Also restrictions on livelihood activities such as fishing, cattle herding and gathering of firewood were impediments to economic development.

With the ending of the conflict the government launched a three-year rehabilitation and resettlement programme named the Eastern Revival (Nagenahira Navodaya or NN). The main objective of this programme in the first 180 days was to make lands accessible through de-mining, reconstructing damaged infrastructure, resettling the displaced and helping them restart their livelihoods. The second phase concentrated on developing the region by improving economic infrastructure including, electricity, roads, transport, water and sanitation.  A major part of the NN programme was aimed at creating jobs and livelihoods in the province. The proposed plans included the development of the Trincomalee harbor, through a public-private partnership, and the fishery harbor at Oluvil in the Ampara district.

The most challenging aspect of resettlement was clearing mines and providing security to the resettled. NN was able to resettle all internally displaced persons, in keeping with international standards, by the end of 2009.  Rehabilitating the damaged infrastructure was also essential for the free movement of people. Projects under the NN improved connectivity between towns and communities via the construction and rehabilitation of more than 3000 kilometers of roads and 30 bridges (Central Bank of Sri Lanka, 2007).

Statistics from the Ministry of Fisheries and Aquatic Resources Development show that the infrastructure available for fishers has increased since 2007. For example, the area under perennial tanks used for inland fishing has increased from 30,155 Ha in 2011 to 37,446 Ha in 2013. This increase accounts for 45% of the total increase in the area under perennial tanks in the country during the 2011 to 2013 period. Further, the production capacity of active ice plants in Kalmunai, Batticaloa and Trincomalee in the Eastern province increased from 160 Mt/ day to 420 Mt/day from 2008 to 2013. This accounts for 44% of the increase in capacity of active ice plants in the whole country.

Source: Own construction using Ministry of Fisheries and Aquatic Resources Development data.
Note:  Districts marked with an asterisk are from the Eastern province.

The creation of employment in the fishery sector was influenced by many factors. But its success mainly depended on the simultaneous attention given to clearing lands, resettling families, improving security, and provision of economic infrastructure. Without attention to all these factors, the success in improving employment in the fishery sector in the Eastern province would have been more gradual.
Topics
Jobs & Development
Countries
Sri Lanka