Sergio Urzúa is an associate professor at the Department of Economics, University of Maryland.
Carolina Gonzalez-Velosa is an Economist at the Inter-American Development Bank. 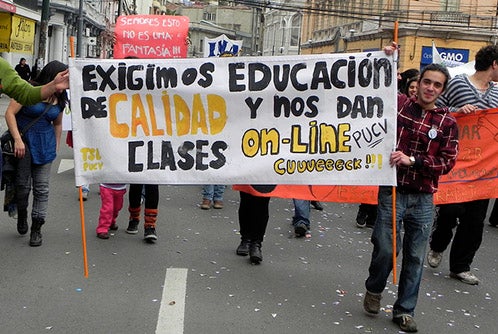 Higher education is more popular than ever in Latin America and the Caribbean (LAC), where gross enrollment rates have risen dramatically – from 17% in 1991 to 43% in 2012, according to World Bank estimates. In Colombia, the rate increase closely paralleled that of the region, but in Chile, the increase was even more remarkable: from 21% to 71%. This turnaround reflected not only greater private investments in education but also public policies aimed at boosting access, including greater financial support for students (Chile) and a geographical expansion of higher education institutions (Colombia). In the process, the mix of students in these institutions for both countries became much more inclusive – in other words, higher education is no longer just for the children of high-income families.

But are these higher education students (and their families) getting their money’s worth in terms of better jobs and higher incomes? To investigate this, we recently carried out an empirical study (with Graciana Rucci, Inter-American Development Bank, and Miguel Sarzosa, University of Maryland) that suggests that investing in higher education isn’t always profitable.

The study mimics the economic exercise that potential students and their families might undertake to determine whether to invest in higher education and if so, which specific degree and institution to choose. Using administrative records and a simple economic framework, we find that in Chile and Colombia, university degrees have on average a positive rate of return – 62% in Chile and 26% in Colombia – although technical education on average isn’t profitable, with expected net returns equal or close to zero (see table).

However, these averages are a bit deceiving, given that there is a wide dispersion in the net returns for both university and technical schools. For example, a university degree in Chile in the 90th percentile of the distribution has a net rate of return of 167%, while a degree at the 10th percentile has a negative return of -16%. In Colombia, most technical education graduates obtain net returns ranging from -33% to 25%, depending on the education program they choose. For those graduates that earn a negative rate of return, it means that they would have been better off if they hadn’t completed college and had instead received the 75th percentile of the distribution in earnings of workers who only completed secondary education.

Moreover, in Colombia, a university graduate has a 30% risk of obtaining a negative net economic return (22% risk in Chile) (see figure). The situation is even worse among technical/vocational post-secondary degree holders: almost 60% face the risk of negative net returns (one out of two graduates in Chile). 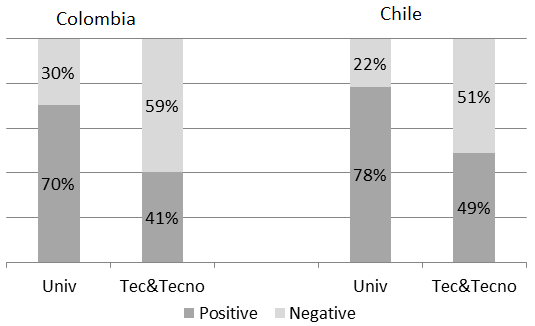 The case of Colombia is particularly relevant. With a per capita income of $7,800 (2013) and an enrollment rate in higher education of 43% (2012), the country illustrates the challenges other nations in the region will experience in the years to come.

While our findings show that there are highly cost-efficient programs in Colombia, they also suggest that – once the annual career costs, extensions, and years of foregone experience are taken into account – higher education doesn’t necessarily guarantee a better socioeconomic status for many Colombians.

Such striking data aren’t surprising for those familiar with the weaknesses of the Colombian higher education quality assurance system. Currently, there are only 30 certified institutions in the country, and requirements for those who open new educational facilities fail to meet minimum international standards. Additionally, certification is traditionally granted based on variables that measure corporate resources (such as consistency of the teaching project, infrastructure, and the faculty’s educational level), while student achievements (such as learning quality and graduate career performance) play at best a secondary role. Both the World Bank and the OECD have documented these and other systemic flaws.

During the last few months, the complex situation has become an important issue in the public political arena. An example is the political debate that recently took place in the Senate. After the substantiated complaint by one of the republic's Senators regarding the quality of higher education in the country, the newly appointed Minister of Education replied that she “fully shared” the concerns of the Senator and recognized that the system “lacks enforcement tools to address quality goals.”

The new Development Plan (February 2015) offers an opportunity for the Ministry of Education to improve the situation. The quality assurance system needs to be reformulated. It must assess institutions not only based on traditional criteria but also on the labor market performance of its graduates. This is without doubt a controversial measure. Many experts and policy makers appear insulted when variables such as employment rates and average earnings are considered as proxies of “quality” in higher education. They contend that education and knowledge can’t be transformed into tradable commodities. However, such an argument, which is frequently used in the educational institutions’ organizations, fails to consider that while Colombians deserve an educational system that promotes critical thinking, reflection, and creativity, they also deserve a system that doesn’t thwart their economic expectations. In fact, many other countries – like Chile, Ecuador, Peru, and even the United States – now share these concerns.

There have been major policy efforts to increase coverage in Colombia, but institutional arrangements securing quality and relevance have been mostly absent. Chile hasn’t done much better. Corrective measures are urgent. Modern labor markets demand individuals possessing the right skills. Sustainable growth depends on a productive labor force. Colombia should ensure greater access to higher education, but not just to any system – it should also foster access to quality higher education. The economic and social costs of not doing so are enormous. This result is not surprising at all. Investing in education is likely to get even less profitable in the near future. In the first machine age, the steam engine commoditized brawn. In the second machine age, which many pundits believe we are currently in, the computer will commoditize brains.
Higher education, or 'brain power training', is not going to be the insurance against poverty it once was.
In all likelihood, spending 20 years of one's life studying will only saddle one with large student debts, and very little prospects for a job that pays a good wage.
The proletariat question of the past will not just be a blue collar worker question. It will increasingly be a white collar worker question.

I would say:No! There are such jobs where it is better not to know the background, when it is harmful if the employee are able for thinking on the task what they have to do. We know the consequences of the overtraining here. These young people become unhappy with their work and even with their life, missing the opportunities of using their higher qualifications. It would be much more important to be satisfied ! What is the difference between a mother having university degree and a mother without it ? A mother having university degree and job at high level does not have too much time for childcare. She needs a lot of help, otherwise she must give up her job. She must share her income with less educated people such as houshold employees, childcare specialists or even bodyguards, etc. Less educated older men have more time for their family. They are happier with a wife who can serve them by cooking, cleaning and raising children as they wish. The younger generation is different. Their quality of life is determined by their income(s)! However, the degree of their education and the higher incomes are not always in close relationship.