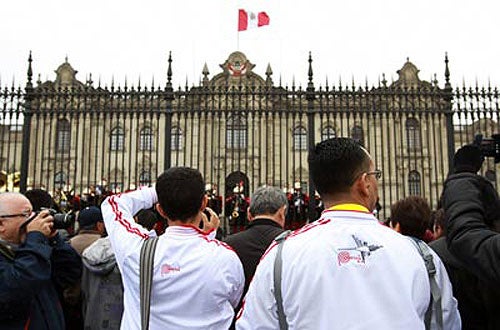 Recently I was invited to the panel discussion, “In a Crystal Economy” at the Universidad San Martin de Porres. The event was part of the Road to Lima 2015 agenda, a series of activities preceding the annual meetings of the World Bank and the International Monetary Fund. The discussion with university students served to reflect on the role of the World Bank in Peru’s development and the importance of the annual meetings for the country.

The history of the World Bank Group in Peru began in 1952 with an initial loan to improve the efficiency of the Port of Callao and to purchase agricultural equipment.  Road to Lima 2015 and annual meetings are milestones in the relationship between the World Bank and this Andean country. With the presence of finance ministers and Central Reserve Bank directors from 188 countries, Peru will become the command center for the international discussion on the global economy.

With the university students, we discussed the economy, politics and laws. But above all, we talked about the wonderful opportunity Peru has to celebrate and share its achievements and at the same time to reflect on the development challenges for the world, the country and the rest of Latin America.

In October 2015, we expect more than 15,000 visitors, including ministers and other government officials, investors and representatives of the private sector, non-governmental organizations and other transnational organizations.  Undoubtedly, the annual meetings will be a window of opportunity for attracting investments since Lima will receive visits from top government officials and private-sector representatives from around the world.

Accompanying me on the panel was Manuel Torres, former Peruvian diplomat and current CEO of the mining company Minera Chonta S.A.C., and Alexander Carranza, advisor to the Office of the President of the Ministerial Cabinet and a professor at Universidad San Martín de Porres and Universidad Nacional Mayor de San Marcos. We discussed the current situation in the country, with an emphasis on the role of economic growth in reducing poverty in Peru thanks to the new jobs created.

Peru faces major challenges in the coming years. A key issue discussed was the role of intermediate cities in generating productivity. Panelists pointed out that in Colombia, Bogota and Medellin generate high competition for domestic consumption and therefore increase value significantly. Brazil and Mexico have similar situations. However, this has still not occurred in Peru, which has only one city with more than a million inhabitants.
The Road to Lima 2015 program will continue to promote this type of discussion among interested parties in the framework of the annual meetings. Everyone is encouraged to participate since Peru, as host country, is becoming increasingly relevant on the world scene and the meetings serve as a good opportunity to strengthen trade and promote investment. For more information on upcoming events, visit roadtolima.worldbank.org. Director for Strategy and Operations in Human Development