Lima, from Gastronomic Center to Capital of Urban Transformation 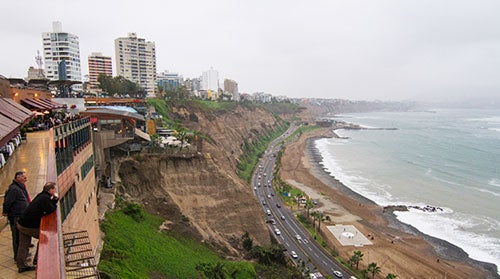 ‘Oh you’re going to Lima? I’ve heard the food is supposed to be amazing’. So goes the typical comment I get from friends and family when I would mention my work related travel plans. And in this sense the city does indeed live up to what is now internationally recognized. In my short amount of time in Lima I discovered it has a gorgeous historic downtown area, a stunning coastline peppered with manicured parks in the upscale parts of town, and a largely flat topography coupled with a near complete lack of rain.

But undoubtedly what draws the attention most of the Peruvian capital is how, in little more than a decade, it has become in one of the cities most populated in Latin America and the Caribbean, with more than 9 million inhabitants.

Like so many other cities, continuous migration to Lima has resulted in it being the urban powerhouse of the country. I was shocked to learn that Lima’s population is roughly 10 times bigger than that of Peru’s second largest city of Arequipa. In 1940, two out three Peruvians lived in the Sierra but only one out of ten in Lima. Today 1 out 3 live in Lima and the metropolitan area has multiplied by 13 times since mid XX century.

Unsurprisingly, urban sprawl is alive and well in Lima and the city now envelops in the area of 1,000 square miles. But despite its size, Lima has very few Central Business Districts, making it a ‘monocentric’ city – meaning that most of the people typically travel in one-direction, heading into the city center for jobs and amenities. And with this sprawl and monocentricity comes the well-known challenge of informal settlements which Lima is not immune to. Informal housing has developed everywhere, covering hillsides, river banks, and the urban peripheries.

Now perhaps all of this doesn’t sound too surprising: a large urban area which generates significant amounts of a country’s GDP is characterized by bad traffic, pollution, sprawl and informality. True. But this is what makes Lima an interesting case. In addition to this, Lima has all the elements to undertake a long awaited urban transformation and become more recognized on the global stage for more than just its food.

Based on our initial discussions with Lima’s Mayor and subsequently with representatives from nearly all of the 22 entities that deal with urban development at the International Workshop on Territorial Attractiveness and Internationalization for the City of Lima, we identified the main projects and investments the city is developing in a short or medium term that will begin to address the challenges of vehicular congestion and urban integration.

During this preliminary stage we think a first step is developing new urban destinations that enable people to live closer to their jobs, travel more easily to and from these areas, and enjoy these areas with their families and friends. To make this a reality, Lima will in parallel need to become more ‘sophisticated’ in how it is managed through the use of land planning instruments whose introduction are now long overdue for a city of its size. This would ultimately position Lima to notably increase its competitiveness, improve the quality of life for its citizens, promote a more complete package for tourism, and attract more foreign investment.

To be certain this is not a quick fix that will happen overnight. With the initiation of works to construct Lima’s new metro line (Line 2), which will extend from the Municipality of Ate in the East to the Western Municipality of Callao, there is a great opportunity to positively influence the future urban fabric of Lima through such investments. The timing of this is all the more important as it is projected that Lima will need a total of six different metro lines in the future in order to cover the city’s expansive footprint.

Another entry point for considering these options for Lima lies in the use of Transit Oriented Development (TOD). Put simply, TOD projects result in places that encapsulate the notion of ‘live, play, work, shop’. To attain this mix, such places must be made with proximity to high-quality public transit, and, importantly, “compact, mixed-used buildings and neighborhoods that, because of their design, encourage walking, cycling, and use of public transit by residents, employees, shoppers, and visitors.” (Transforming Cities with Transit; Hiroaki Suzuki, Robert Cervero, and Kanako Iuchi; The World Bank; 2013)

Successfully undertaking TOD projects, particularly in developing countries, can be a challenge but it’s been done in places like Bogota, Mexico City, Istanbul, Budapest and Guangzhou to name a few.

The road that Lima needs to travel to achieve this urban transformation will be long and complex. But I see this period as an exciting time for the Bank to get well and truly engaged with city’s administration in order to transform the dialogue around urban issues in Lima. After wouldn’t it be great to move past the point where we have to always talk about how bad traffic was this morning?