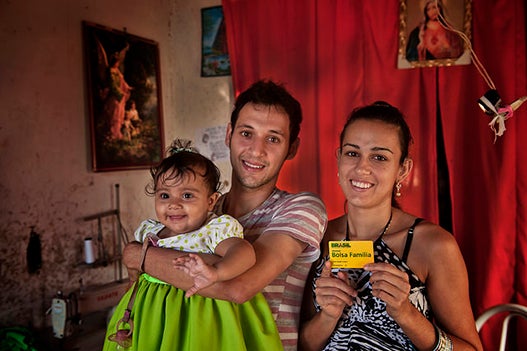 Brazil is in the midst of a deep recession, beginning in late 2015, with the economy contracting 3.5 percent in 2016, unemployment surging from 4.3 in December 2014 to 11.9 percent in November 2016, and real wages declining. With wages as the major source of income of poor and vulnerable households, Brazil’s gains in poverty and inequality reduction are at risk. World Bank estimates reveal that Brazil’s decline in poverty has reversed, with extreme poverty increasing to 3.4% in 2015 (from 2.8% in 2014), and the overall poverty rate in 2015 increasing to 8.7% (from 7.4% in 2014). At the same time, inequality reduction seems to have stabilized between 2014 and 2015.

These developments are in sharp contrast to Brazil’s accomplishments in poverty and inequality reduction during the last decade (Figure 1). Between 2004 and 2014, more than 28.6 million Brazilians managed to escape poverty, thanks to rapidly growing formal employment, higher real wages and redistributive social assistance programs such as Bolsa Família. Considering the duration and depth of the current recession, how can Brazil safeguard against a reversal in the social gains accomplished over the last decade?

Figure 1: Progress in Poverty and Inequality Reduction in Brazil 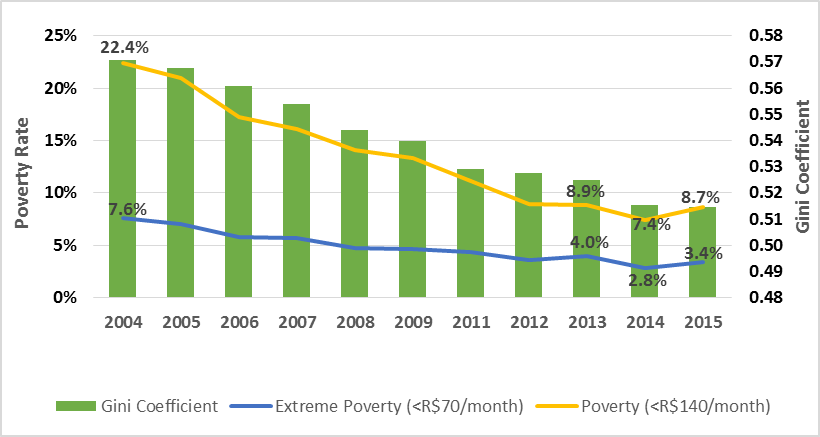 Our recent World Bank study argues that increases in the budget for the Bolsa Família program can be instrumental for preventing more Brazilians from falling into poverty, until the necessary structural reforms take place in Brazil and the engines of growth are reignited. As part of this work, we were able to estimate the extent to which the deteriorating macroeconomic conditions and shrinking labor markets in Brazil will have an impact on poverty and inequality in 2016 and in 2017, as well as generate a detailed profile of the “new poor” associated with the crisis. We also approximate the additional budget needed for the Bolsa Família Program to effectively mitigate the poverty impacts of the crisis and protect Brazil’s past achievements, especially on poverty and inequality reduction.

Our analysis suggests that inequality and poverty will increase in 2016 and remain high in 2017. Under the most positive scenario 1, with aggregate economic activity declining by 3.4% between 2015 and 2016 and increasing by 0.5% between 2016 and 2017, inequality is expected to increase, and about 2.5 million more people will be pushed into poverty. Under the  more pessimistic scenario 2,  with real GDP declining by 3.7% between 2015 and 2016, and by 1.0% between 2016 and 2017, inequality increases even more in 2017, and 3.6 million people will likely fall into poverty. In either case, poverty rates are expected to increase mainly in urban areas and less in the rural (where poverty rates are already higher). Our analysis also reveals that those who are pushed into poverty as a result of the current crisis, or the “new poor” as we call them, are likely to be slightly younger, skilled, located in urban areas, located in the southeast, previously working in the service sector, and primarily white.

Given the depth and duration of the current economic crisis in Brazil, it will be critical to transform Bolsa Família from an effective redistribution program to a true safety net program that is flexible enough to expand its coverage to the newly poor households generated by the crisis. This would require a budget in 2017 of R$30.41 billion (US$9.8 billion), up from the R$26.4 billion (US$8.51 billion) budget in 2015, in order to truly target scarce financial resources to those who need them the most1. 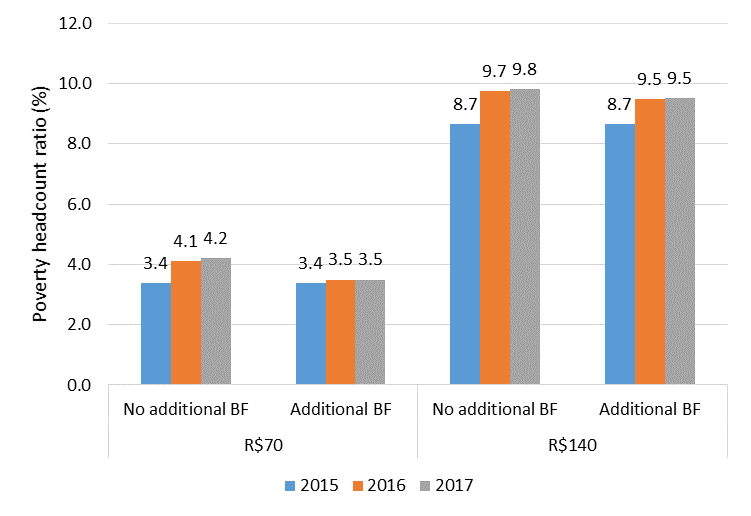 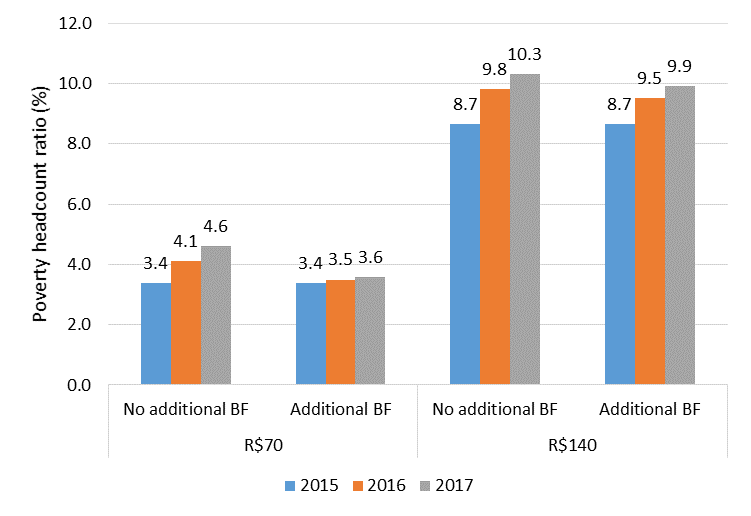 Source: World Bank staff estimates based on PNAD 2015 and the ADePT Simulation Module

Distributing additional Bolsa Família budget to eligible “newly poor” households can prevent the extreme poverty rate in Brazil from increasing beyond current levels, though its impact on preventing the overall poverty rate from increasing is not as dramatic. It is important to bear in mind that our estimates of the additional budget needed for Bolsa Família are based on the program’s current level of real benefits and eligibility rules, and assume annual adjustments in the nominal budget in par with the annual inflation rate so at to maintain the purchasing power of the benefits constant over time. Delays in adjusting the nominal value of the transfers of Bolsa Família in par with the prevailing inflation rate are likely to lead to higher poverty rates than those estimated in this report, all else being equal.

Despite limited fiscal space in the medium run, it is possible to reallocate funds from poorly targeted and ineffective programs and to improve the efficiency of spending, in order to expand funding for the most progressive elements of social policy2.  This will be an important step for Brazil in protecting its poorest citizens from the harshest effects of the economic crisis. This is a really interesting report. However, would be great a estimative of the impact of a reasonable reform in the Brazilian business environment. How many additional jobs and investment we would have if were less confuse do business in Brazil?

World food prices have been subject to some multi year increases, and domestic prices in Brazil for food are of course, not immune to such a thing. It would be interesting to try to see if B.F. has contributed to increases in food cost, even if its tolerable fraction of the generally undesired delta...

Endless philosophical arguments against paying people without making them sell labor argue inflation eats the benefit. Differing arguments apply to whether the payout is from a general fund, or created without reconciliation with incoming taxes or other national revenue. The "its only printed money" argument yet again... I'm simply suggesting trying to correlate domestic food price increases with B.F. is worth attempting on an ongoing basis. I'm not sure if careful numerical methods are likely to make conclusions that are generally beneficial to understand how different humanitarian disbursements effect price increases, specifically for food. But no attempts to work thru it generates nothing new to think about.