Depression and its links to conflict and welfare in Nigeria 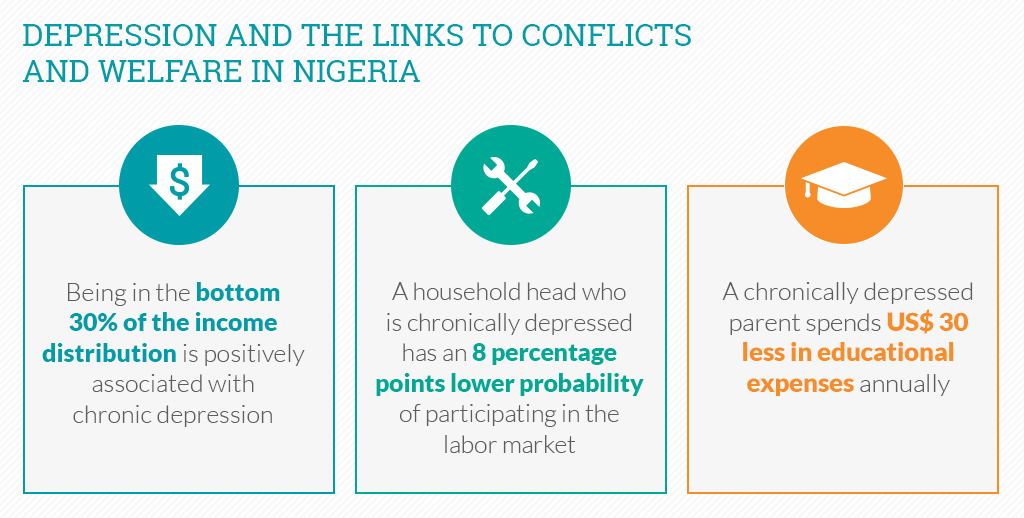 Chronic depression affects about 20 percent of Nigerian heads of households, according to the most recent results of the Nigerian General Household Survey (GHS) Panel, which measures indicators from agriculture, welfare, and other areas of life in Nigeria once every two to three years. This statistic is linked to an additional finding that nearly 2 out of 5 Nigerian respondents have been affected by at least one negative event, such as conflict and/or the death of a household member.

We worked with Julian Jamison and Renos Vakis to explore the nexus between mental health, negative incidents, and economic investment. Our findings show that poor mental health is strongly associated with having experienced shocks, conflicts, and/or deaths (which we define as “adverse events”). Our findings also show that depression is associated with lower labor participation, and lower investment in human capital. 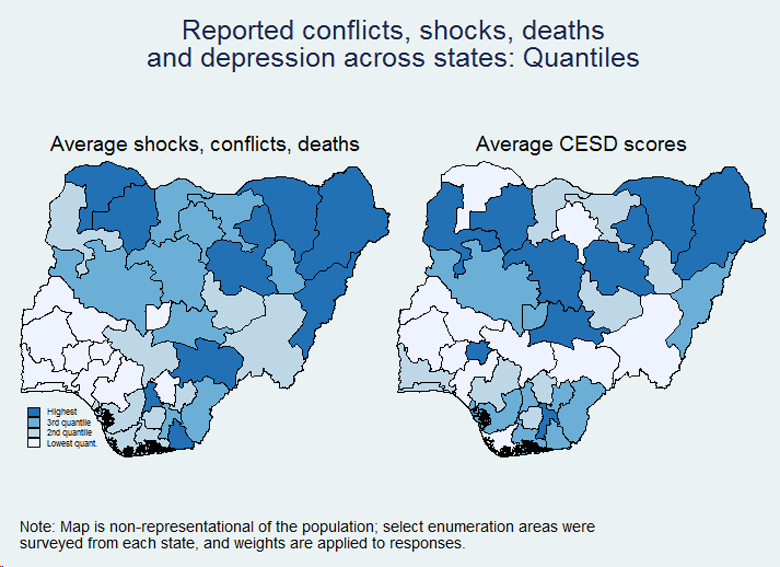 The GHS panel measures all conflict-related events, the recent deaths of household members, and negative shocks (be they those experienced by the community, such as weather, or personal shocks, such as losing one’s job) reported by respondents. Unsurprisingly, these negative incidents are highly correlated with chronic depression. As visualized in the graph below, there are higher levels of depression measured via a version of the Center for Epidemiological Studies-Depression (CESD) scale in states where more households have been impacted by adverse events.
Of all the adverse events, experiencing conflict in the last two years has the largest and strongest relationship with the respondent’s measure of depression, registering a nearly 26 percentage point increase in the probability of being depressed. Going through personal (rather than community) shocks is also strongly correlated with the probability of chronic depression.

Side note: As one can imagine, topics such as conflicts, shocks, and depression are sensitive. Therefore, we also conducted a survey experiment to test measurement issues around depression and preferences. The results from this experiment are described in this link.

What does this mean for the poor and for welfare?

Income is significantly and negatively correlated with depression; and poverty and negative shocks go hand in hand. And adverse events affecting households in the bottom 30 percent of income distribution can increase the probability of having a chronically-depressed household by 10 percentage points.

Our findings show that respondents who are classified as chronically depressed (according to the CESD scale) have a lower likelihood of engaging in any form of work. When the CESD score is higher than ten, the cut-off for indicating chronic depression, the probability of working starts to drop.

On the other hand, depression does not seem to have a strong correlation with the number of hours worked.

Figure 2 Graphical representation of a locally weighted regression of the probability of working on one’s CESD score. 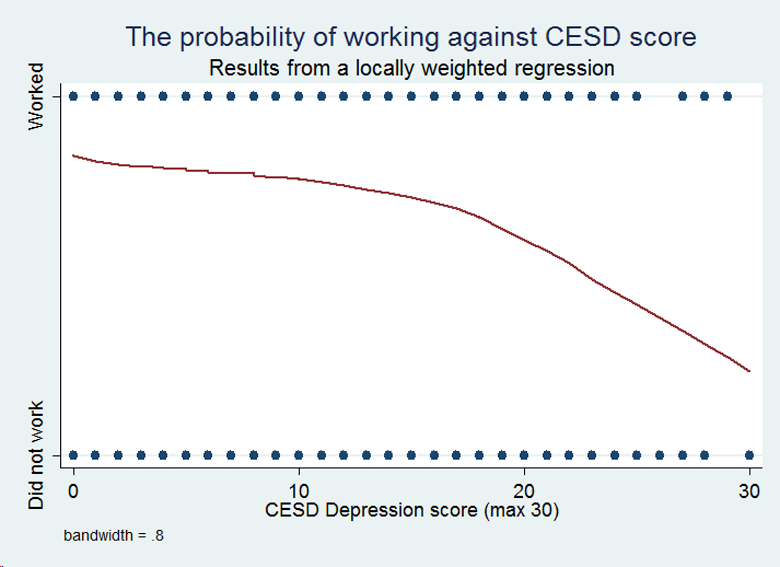 We also find that depression in parents is correlated with lower educational expenditure on children, especially girls. Furthermore, we find that parental depression is associated with an increased probability of the parents’ 5-year-old to 11-year-old children working in the seven days before the interview.

Figure 3 Educational expenditures (in Nigeria Naira, 2013 PPP terms) for those whose parents are classified as depressed (on the left), or not depressed (on the right). Means and significance level from the t-test measuring differences are shown. 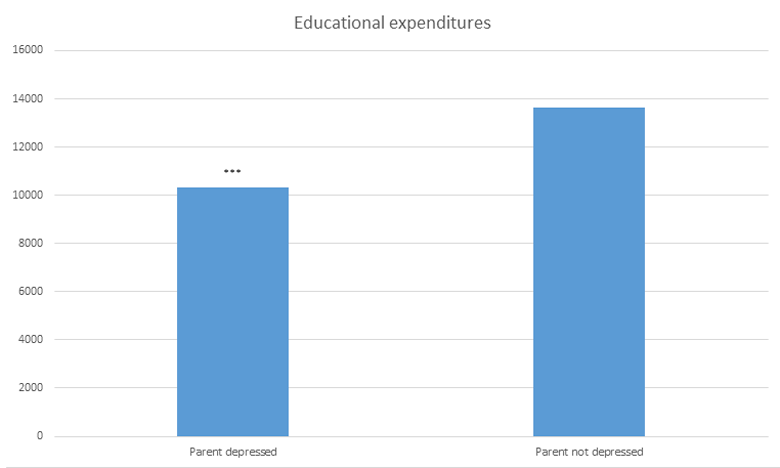 As our findings show, mental health may have indirect effects on poverty and human capital in addition to the societal impacts that adverse events such as conflicts have. As such, we may need to update our understanding of the impact these events can have, and through which channels they work, such as outcomes in mental health.

Conflict, death, and other shocks may be much costlier than previously estimated and, if so, this amplifies the importance of addressing them. Thus, policy makers should take these augmented costs into account when making decisions on policies and designing programs mitigating conflict and shock, such as those related to insurance, prices, and security.

Furthermore, our findings on investments in human capital show that there may be quantifiable benefits to improving mental health. It suggests that policy makers should develop policies to treat and minimize the effects of depression, particularly that experienced by victims of serious shocks, such as conflict and death.

By doing so, we may help mitigate the overall economic impact of these incidents.

Enroll here to get fresh Behavioral Science news from the World Bank, and share our post by clicking on the links at the top. If you have thoughts on mental health, shocks, and/or poverty, comment below to continue the dialogue.
Topics
Education
Health
Poverty
Urban Development
Countries
Nigeria
Regions
Africa