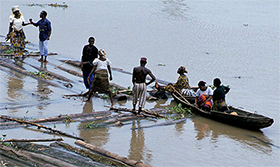 On the periphery of Lagos, Nigeria, lies Makoko, a burgeoning slum community perched on a lagoon. Residents live in makeshift homes on stilts made of collected wood and tarp, and get around primarily by canoe.  Once a small fishing village, Makoko now draws migrants from neighboring countries, who flock to Nigeria for low-paying, unskilled jobs.
​
In many ways, Makoko serves as a microcosm of urbanization in Sub-Saharan Africa, which has the world’s fastest pace of urban population growth:
​
Urban and rural population (% annual growth), 2013
This post takes a closer look at the data on urbanization in World Development Indicators. But a word of caution is necessary first: the definition of urban areas varies from country to country and may not be consistent among different data sources within a country. The urban/rural estimates rely on data produced by national sources, which reflect the definitions and criteria established by national authorities. Due to variations of each country’s overall population size, national statistical offices are in the best position to establish the most appropriate criteria to characterize urban areas in their respective countries (United Nations Population Division).

Well, what’s happened in Nigeria? The country moved from low to lower-middle income status in 2008; and earlier this year, Nigeria’s GDP estimates were improved and revised upward, revealing that it is Africa’s biggest economy and the 23rd largest in the world  at $522 billion in 2013. At the same time, Nigeria is confronting growing problems of pollution, traffic congestion, and poverty in its urban communities in Lagos. And Nigeria is not alone in these issues.

Real adverse environmental affects of urbanization
When we think of cities, we often picture crowded streets, constant traffic, heavy pollution, and strained resources.  This isn’t an inaccurate assessment—urban growth is often correlated with all of these things and urbanization can have adverse environmental effects,  concentrating pollution and harming health. Data show us that as the urban population grows, so does energy use, CO2 emissions, and motor vehicle ownership.  It’s no wonder, then, that crowded areas like Makoko can be a logistical obstacle for governments. In 2012, parts of Makoko were knocked down for being “an environmental nuisance, security risk and an impediment to the economic and gainful utilization of the waterfront.”

It’s not all bad news, though.

The aquatic community of Makoko is just one example of how cities expand to accommodate population growth.  More data on population can be found in the World Development Indicators database as well as the Population Estimates and Projections database. I think more needs to be done in relation to our standards of living. Those congested urban areas have to be decongested by developing the rural and remote areas.

It's very educative and am using it for my research studies as an Environmental Consultant. THANKS