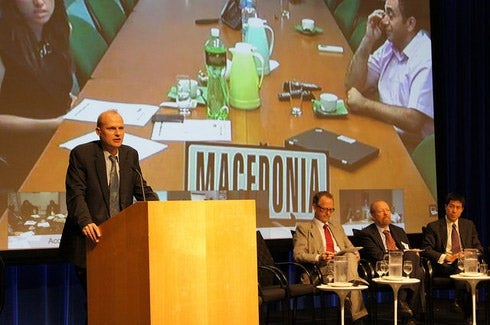 What interventions are needed by governments - and by the World Bank - to stimulate and support the realization of the economic benefits of Open Data for everyone?  How do we prioritize what kind of data is needed?  These were some of the simmering questions that were posed at last Wednesday's World Bank Live event.  A collaborative effort among World Bank global practices and units – Transport and Information & Communications Technologies (ICT), the Development Data Group (DECDG), Open Finances, External and Corporate Relations, and others – this global policy dialogue event served as an opportunity to listen in on leading experts explaining and debating the latest evidence of the economic benefits of Open Data and how it can be applied to advance socioeconomic growth in the developing world.

From the short videoconference presentations we heard from five country officials, we learned that Open Data is already making an impact.

Examples of Open Data's use and impact in India, Russia, Macedonia, Ghana, and Mexico
We first heard from Rajendra Kumar, Joint Secretary (eGov) at the Department of Electronics and Information Technology of India.  "Ever since India launched its Open Government Data Platform, we've witnessed more government participation and interest – across ministries and state governments," stated Kumar.  He also pointed to an often underappreciated result of open data programs: increased data sharing among government agencies.

"Open Data is a major source for growth in Russia, especially for Internet and IT companies," commented Ekaterina Shapochka, Advisor to the Russian Minister of Open Government.  She also added that Open Data could help increase the quality of government services to its citizens.

Irena Bojadzievska, Macedonia's National Coordinator for Open Data, explained how Open Data helps to boost the innovation component in Macedonia's growing ICT sector.  And in an effort to nurture more innovative companies, the government recently launched an innovation fund, which will provide financial resources for companies that demonstrate their ability to develop strong business plans, including those factors based on Open Data innovations. 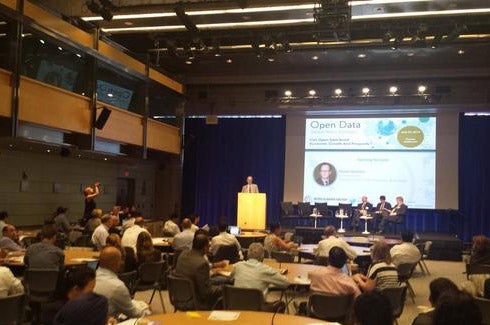 In the case of Mexico, Open Data has helped the government identify priority areas.  Ania Calderon Mariscal, Director General of Digital Innovation, summarized how working on open data led the way for Mexico to focus on supporting innovation and financial inclusion for small- and medium-size enterprises (SMEs).  "More than 99 percent of Mexico's economy is made up of SMEs, and they help create seven out of 10 jobs," added Ania.

While it was great to hear how developing countries are already tapping into the many socioeconomic benefits of Open Data, it was also illuminating to listen in on the keynote speakers' viewpoints on the evidence studies.

Evidence of Open Data seen in the creation of data-driven services
Andrew Stott kicked off his presentation in an upbeat tone.  As someone who's been speaking about Open Data on the global stage for the past seven years, he was pleased to share that "the evidence on the benefits of Open Data is starting to flow in." These benefits include the creation of data-driven services that didn't exist before (or we didn't think we needed them), improved efficiency, and the ability to make better decisions.

Michael Chui, a Partner at the McKinsey Global Institute, gave a summary of findings from McKinsey's seminal report on the value of Open Data. "Data openness or liquidity can be defined in four characteristics," Chui explained: accessibility, machine readability, cost, and rights.  He also added that the effective use of data is now becoming a basis for competition for small firms, companies, and even countries.

Joel Gurin, a Senior Advisor at the Governance Lab at New York University, presented the Open Data 500 Project, a project studying companies that use government open data as a key business resource.  His presentation focused on the overall landscape of Open Data, the role of governments, six major revenues sources / business models emerging from more open data usage, and how all of these areas can be applied to developing economies.

The subsequent panel discussion zeroed in on the event's central question: can Open Data boost prosperity and economic growth in developing countries?  With Andrew Stott serving as the moderator, the discussants included Michael Chui, Joel Gurin, Daniel Castro from the Center for Data Innovation, and Jeff Kaplan from Socrata, as well as World Bank staff members Prasanna Lal Das and myself (Amparo).

What can serve as strong foundations for starting Open Data programs? 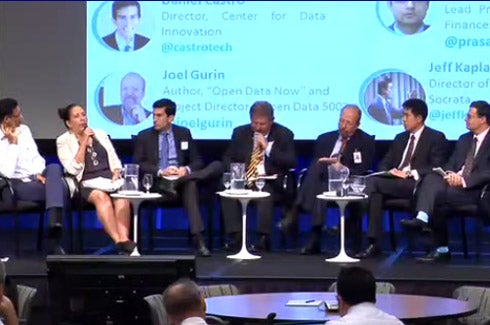 This notion – that developing and emerging economies could join the "gold rush" and maximize the many benefits of Open Data – continued to stay front and center during the panel discussion.  Joel Gurin pointed out the importance of placing a priority on identifying the basic, public-serving applications for Open Data, which can serve as a strong foundation for starting Open Data programs.  I then shared my perspective on the challenges and misunderstandings of Open Data – specifically, that many people incorrectly think that open data is simply to publish data on a website for transparency and accountability purposes, and are not fully aware of the importance of data reuse for economic and social development.

These presentations and the discussions that followed left us with the following takeaways:

Secondly, there is no agreed methodology to evaluate the benefits of Open Data, and there is still no proper impact analysis –i.e. identifying a counterfactual- anywhere. There are plenty of concrete, factual examples of benefits and these show very high rates of return for open data investments, but still no agreed method to measure the overall benefits to an economy. The McKinsey report and the Lateral Economics study are good places to start, but these methodologies are themselves very data-driven and their applicability to data-scarce economies is still to be proven.

Third, even though there is no standard methodology, it makes economic logic that increasing the re-use of any data will necessarily increase the return on investment on the data, since the value of the data is not depleted by use (an economist would say that data is a non-rivalrous good).

Fourth, there was wide consensus that Open Data initiatives are quite inexpensive relative to the magnitude of their potential benefits, and are low-risk endeavors.

Putting all of these together, we are not yet in a position to tell a government decision-maker that implementing an Open Data initiative will increase GDP in his/her country or region by a specific percentage or amount. But the evidence does suggest that the return on investment is substantial. And let's not forget that Open Data has non-economic benefits as well, such as transparency, improved service delivery, and increased data sharing in the public sector, which decision-makers should also consider. Thank you for your comment. For more information on Open Data and its benefits, please see the Open Data Toolkit at http://data.worldbank.org/open-government-data-toolkit.

an Open Data initiative will increase GDP in country or region by a specific percentage. But no the evidence suggest that the return on investment is substantial. And let's not forget that Open Data has non-economic benefits as well, such as transparency, improved service delivery, and increased data sharing in the public sector, which decision-makers should also consider. However, it will help people to understand more.