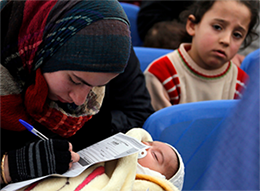 Recently, I wrote a blog highlighting the latest data trends in refugees and migration data as the global crisis reached unprecedented levels. It’s now two months later and refugee flows continue to swell. In October alone, reports the UNHCR, the total number of refugees reaching Europe matched the total for the entirety of 2014.

This week two pertinent conferences will be held by the World Bank and the International Organization for Migration to address the pressing issues surrounding this crisis. First, on December 9 the World Bank and the EU Presidency of Luxembourg held the “Conference on Migration and the Global Development Agenda” at the World Bank Headquarters in Washington, DC. Speakers discussed maximizing benefits and minimizing risks of migration for migrants and host, transit and origin countries. The event was open to the public and was livestreamed.

On December 11, the IOM and the Institute of Current World Affairs will host a conference, “The Global Migration & Refugee Crisis: Challenges, Lessons & Opportunities” at the Carnegie Endowment for International Peace in Washington, DC. The event will bring together leading experts, NGOs, UN officials, journalists and members of the refugee and migrant communities to discuss the options for the international community in moving forward on crisis response. Panelists will also discuss the developmental impact of migration, lessons from past crises, as well as how media coverage affects policies on the issue. To register and find out more information on the event, visit bit.do/migrationtalks.

The IOM has also launched the “I am a Migrant” campaign in an effort to humanize migrants. Using the website’s interactive platform, users can browse personal stories of migrants from all over the world and share their own. You’ll even find World Bank President Jim Yong Kim’s story.

As more and more efforts come about on the refugee and migration crisis, you can keep up to date on data trends using the World Bank’s net migration and refugee flows data available in the World Development Indicators database. The latest available data show:

For more learning material on migration, check out the World Bank’s Migration page, the Migration and Remittances website, the International Organization for Migration, and the United Nations Refugee Agency (UNHCR).
Regions
Middle East and North Africa