Editor’s note: This is a guest blog from Margriet Nieuwenhuis, Eva van Steenbergen and Wendy Carrara on behalf of the European Data Portal. The indicator “Open Data readiness” mentioned in the analysis below is unrelated to the Open Data Readiness Assessment tool developed by the World Bank.

The public sector is providing increasing amounts of Open (Government) Data free of charge. Open Data refers to the information collected, produced or paid for by public bodies and can be freely used, modified and shared by anyone for any purpose. In Europe, the maturity of Open Data varies between the countries, as recent research shows. In 2015, the European Data Portal team conducted an assessment of where European countries stood with regard to Open Data. The countries included are the EU Member States (28 countries in total) plus Iceland, Liechtenstein, Norway and Switzerland – further on referred to as the EU28+ countries.

The results of the assessment indicate that just 44% of the journey towards achieving full Open Data maturity, has been completed by the EU28+ countries. Completing a full Open Data transformation would entail having set-up a clear Open Data Policy addressing licensing aspects, offering guidelines at national level for local governments to learn from and adapt. It would also require having a better understanding of the expected impact of Open Data and generating sufficient traffic towards an Open Data portal. Regarding the portal, several features should be implemented ensuring a broad coverage of different data categories and that the data can be downloaded and used. In implementing these key items, we notice large differences between the countries. Some countries are still in the process of launching a national Open Data portal, while other countries are improving their portal and are starting new initiatives. 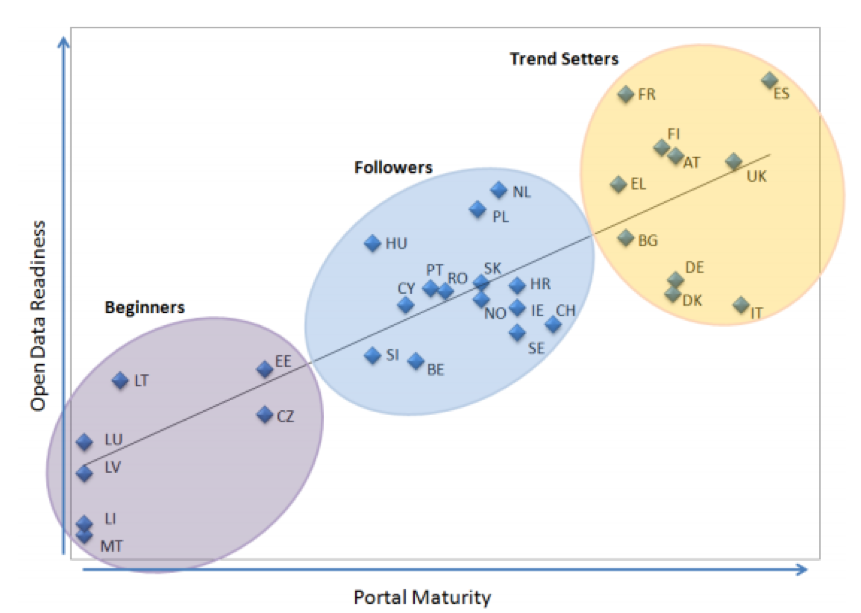 Based on these results, the EU28+ are clustered into three different levels of Open Data Maturity:

There are large differences between the countries in their Open Data journey. This also opens up the opportunity to learn from each other and share best practices. The basics of Open Data can be obtained by following the thirteen eLearning modules on the European Data Portal. Tailored support is provided to the EU28+ countries in addition to the more general support to be able to tailor support to their specific needs. End of March 2016, the second assessment of Open Data maturity is planned to start within Europe. The assessment will also be repeated in 2017 to observe the evolution in implementing Open Data policies.

What should those Beginner countries do to move towards the Follower group?

In addition to setting up and improving their policies and portal, countries need to address a number of barriers. The barriers vary between political, legal, technical and financial topics, but also include a lack of awareness. It is important for countries to start with an Open Data strategy that clearly recommends the release of data under an open licence, preferably also stating which licence is recommended. Currently, there are only a few countries that use CC0 licences making re-use completely free for all purposes. Technical standards should be prescribed as well to guarantee interoperability. The European Data Portal harvests metadata from all national Open Data portals across Europe, but to enable combining data from different countries, the data should be available in the same open format and structure. DCAT-AP is the standard vocabulary for describing metadata of public sector datasets across Europe, but countries should actively follow those guidelines and include them in legal documents and strategies.

Another important aspect is the interaction with Open Data re-users. The availability of feedback functionalities on a portal or the option to request specific datasets increases the chance that the data quality improves, that it is useful, and will be re-used. However, potential re-users need to know what Open Data is and what potential it has, before they even think of the re-use possibilities.

One very important barrier we need to address is the lack of political will. Even in first world countries a sense of urgency is often lacking. ‘Why would we invest money in something as innovative as Open Data, when we have real economic issues we need to address?’ The truth is precisely the fact that Open Data can help overcome certain economic constraints. Think about the importance of Open Data to develop Smart Cities. Those cities use data and technology to make their city more efficient, more environmental friendly, and prepare for the expected increase of the number of inhabitants. Multiple countries indicate that they need real-life examples of Open Data re-use with accompanying economic benefits. The European Data Portal is currently running a Survey on the benefits of re-using Open Data. Are you using Open Data on a daily basis at work, whether it’s for a start-up, SME, or a multibillion company? Participate in our survey, share your story, and contribute with your use case to convince more governments to start using Open Data!

Our final recommendation would be to measure your success. This is all part of building a case for more Open Data and showing the benefits made available thanks to Open Data and the effectiveness of the policy put in place. 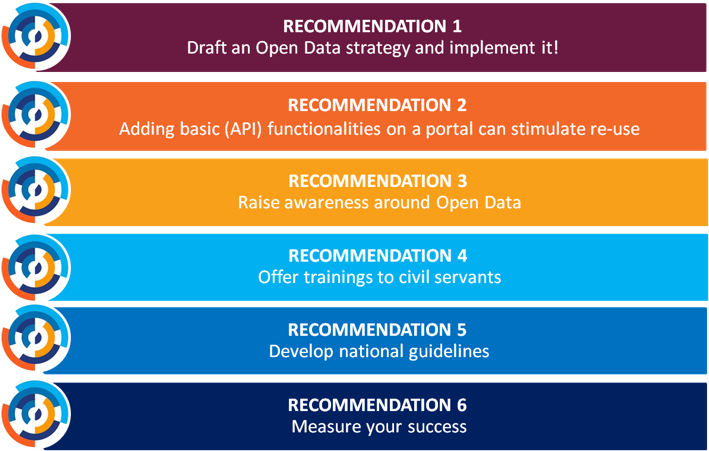 Do you want to read the entire report about the status of Open Data in Europe? Please visit the European Data Portal.

Sadly the data underneath the report and the graphs has not been published. I've been trying to get the data from the European Commission and the project team since last December, without success. It is strange that the data for this benchmark is not available, because without it the conclusions in the report cannot be evaluated and are de facto useless in practical terms. Other benchmarks and indexes do publish their full data, such as the EU PSI Scoreboard (funded by the same part of the EC), the W3C Open Data Barometer and the OKF's Open Data Index. It is deeply ironic that an open data report does not stick to the same principles it claims to be supporting.

Thanks for the comment Ton, the authors of the blog point out to me that that "We're committed to having all [data] open", but that first, "European Member States have to waive the confidentiality agreement they requested during the research exercise that led to the benchmark" and that the "European Commission is currently discussing obtaining a waiver from the EU Member States in order to share the data."
I expect this process might take time and it sounds like the authors are making progress on this front.