Join us live online or in-person on Wednesday at 4pm for "50 Years of Measuring World Economies" event held at the World Bank James D. Wolfensohn Atrium in Washington, DC.

The International Comparison Program (ICP) – the world’s largest global data initiative led by the World Bank under the auspices of the United Nations Statistical Commission – is celebrating its 50th anniversary this year. Since the initiation of the ICP as a modest research project at the University of Pennsylvania by Irving Kravis, Alan Heston and Robert Summers in 1968, the Program has grown to cover about 200 countries and 20 global, regional and sub-regional agencies. 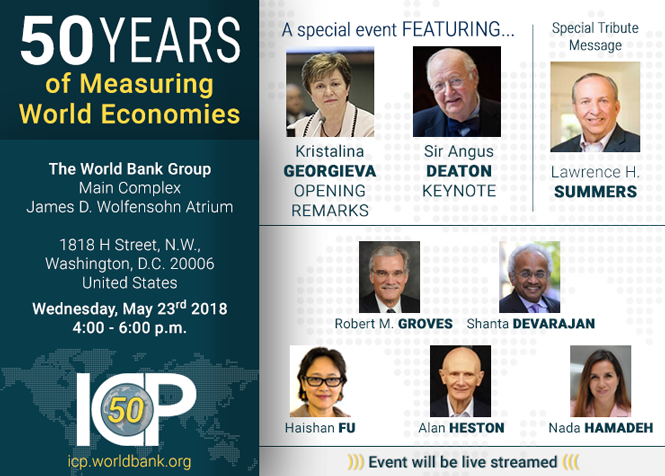 To commemorate this milestone, World Bank Group Chief Executive Officer Kristalina Georgieva, 2015 Nobel Laureate in economics Sir Angus Deaton, and Georgetown University Provost Robert M. Groves will come together at an event to discuss the challenges and opportunities for investing in evidence for sustainable development. In addition, Lawrence H. Summers, the 71st Secretary of the US Treasury and son of ICP co-founder Robert Summers, will share a recorded tribute. A video produced by the World Bank for the occasion will showcase the history and impact of the ICP.
The ICP collects and compares price and expenditure data around the world through its partnership with participating countries and agencies. This data is used to estimate and publish purchasing power parities (PPPs) of the world’s economies. PPPs are the measurement used to compare the relative size of economies and the levels of material well-being.
Today, PPPs play a crucial role in analyses carried out by policymakers, multilateral institutions, academia, and the private sector. The World Bank uses PPPs in its shareholding formula and indicators underlying its twin goals on poverty and shared prosperity. PPPs also underpin indicators used to monitor national progress towards six of the Sustainable Development Goals (SDGs) of the United Nations’ 2030 Agenda, including poverty, inequality, health and well-being, energy, the environment, and labor productivity.
Join us for this lively discussion on the challenges and opportunities for Investing in Evidence for Sustainable Development!
Tags: Data, Global Economy, Statistics, Sustainable Development Goals, SDGs, Purchasing Power Parities, PPPs, Economics, Welfare,
Hashtag: #ICP50th Thanks for the good work you have been doing for these years.