How to climb the Open Data maturity ladder: lessons from Europe

Editor’s note: This is a guest blog from Jorn Berends and Wendy Carrara on behalf of the European Data Portal. The indicator “Open Data readiness” mentioned in the analysis below is unrelated to the Open Data Readiness Assessment tool developed by the World Bank.

The majority of European countries are improving their Open Data maturity

Open Data is taking off in Europe. Open Data – which refers to publicly available data that is free for all to use – is set to have a monumental impact on societies in the upcoming years, and has a potential market size for the European Union of 75.7 bn EUR by 2020. European countries seem to be on track to reap the potential of Open Data, although a lot of work remains to be done and substantial differences persist between countries. In 2016, with a 28.6% increase compared to 2015, the EU28 and Norway, Switzerland and Liechtenstein – referred to as EU28+ –  completed over 55% of their Open Data journey. This shows that, by 2016, a majority of the EU28+ countries have successfully developed a basic approach to address Open Data. This is just one of the conclusions of the 2016 Open Data Maturity in Europe report, prepared by the European Data Portal. What can this report tell us on the countries that are doing particularly well in this regard, what is it that makes them European champions? Furthermore, what can other countries learn from them?

Spain and France are leading the way in Europe, but substantial differences persist

The measurement is built on two key indicators ‘Open Data Readiness’ and ‘Portal Maturity’, thereby covering the level of development of national activities promoting Open Data as well as the level of development of the country’s national data portal. Based on these indicators, the European countries are clustered into four different levels of Open Data maturity: Beginners, Followers, Fast Trackers and Trend Setters. 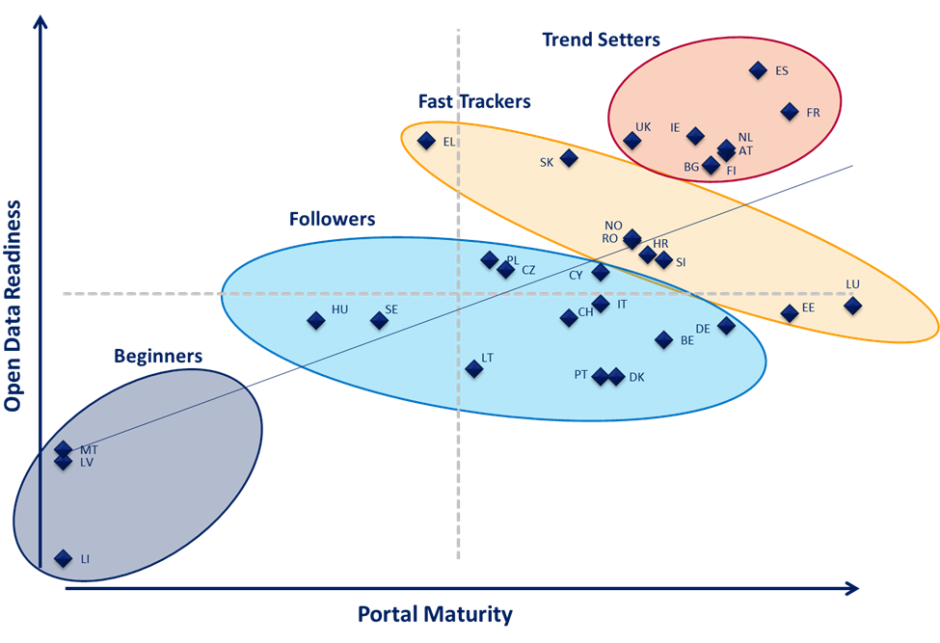 Eight countries can be identified by these indicators as the trendsetters in Europe, with Spain leading the way. These countries benefit from both strong policies and have continued developing their portals during the course of 2016. They have implemented an advanced Open Data policy with extensive portal features and have national coordination mechanisms across multiple domains.

When zooming in the indicators used, it appears that on Open Data Readiness, Ireland, the Czech Republic, Luxembourg and Slovakia have accelerated most significantly in 2016. For example by the introduction of a predefined approach to ensure all data sets are up-to-date, the identification of priority domains or by including regional portals in their national data portal. Countries that showed the strongest increase on Portal Maturity are Estonia, Lithuania and Luxembourg. Luxembourg has increased thanks to the launch of its national portal, and explanations for Estonia and Lithuania can be found in having collected more information about the visitors of the national portal and having increased the percentage of machine-readable data sets. 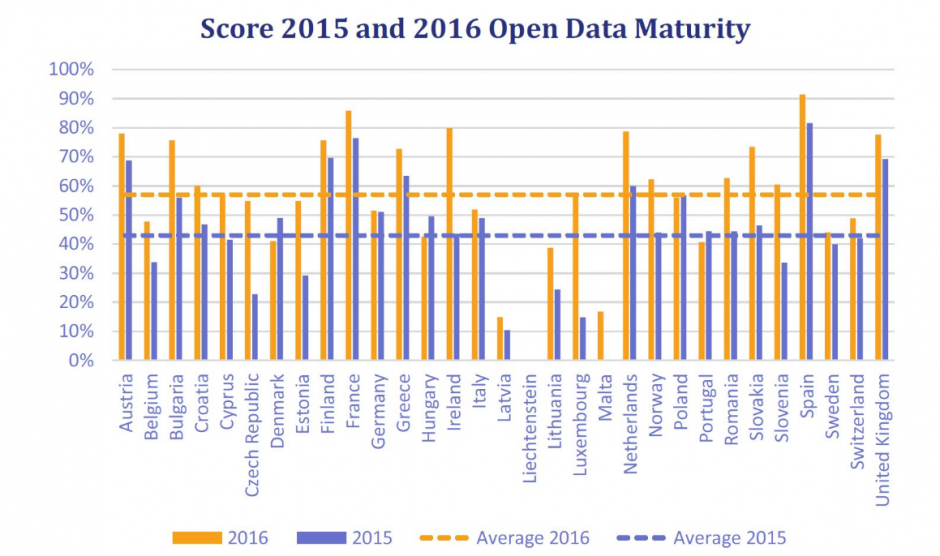 What sets the trendsetters apart and what can we learn from them?

Taking a deeper dive into Europe’s trendsetters unveils their success-factors, and also allows other countries worldwide to learn from these best practices. Often, these success stories are a combination of factors. Spain for instance, has solid Open Data policies in place, with a 5 year national strategy, identified priority domains, and a pre-defined approach to ensure that datasets are up-to-date. Multiple Open Data events are organised annually in order to create awareness about Open Data and to stimulate the Open Data community. This is accompanied by policies to encourage the use of a standard license, and the principle that all data should be free of charge and published under open licenses. Together with a strong national coordination, providing national guidelines for publishing data and the integration of regional portals in the national Open Data portal – this results in a high score on Open Data Readiness.

The importance of Open Data is stretched by multiple studies that were conducted in Spain, for instance on the market value and on better service delivery, all contributing to more awareness on Open Data and better public service delivery.

France, as a runner-up in Europe, also has a solid policy in place supporting the take-off of Open Data, with the Open Data initiative being part of France’s first National Action Plan. The adoption of the Digital Republic Bill in January 2016 helped to overcome the financial barrier and the low level of Open Data awareness. With the Digital Republic Bill, public bodies must publish their databases online. In addition, public authorities will be required to guarantee the quality and updating of Open Data. The Digital Republic Bill also requires that all public administration websites specify their level of compliance with accessibility regulations, failing which financial penalties will be applied. This resulted in the fact that France performed extremely well on the dimension Open Data Readiness.

The release of Open Data in the United Kingdom is also underpinned by a solid policy framework. This includes having national guidelines that are applicable to sub-national or specific sectors, and guiding principles to ensure a smooth roll-out of Open Data. The UK Government Licensing Framework (UKGLF) provides a policy and legal framework for licensing the use and re-use of public sector information across the public sector. A number of regional or city initiatives are integrated into the data.gov.uk portal, such as Open Manchester and Birmingham Open Data to mention just a few. The UK’s Portal Maturity is underlined by the fact that its data portal sends automated reminders for datasets – this predefined approach ensures that data sets are always kept up to date, and is a feature that is a best practice throughout Europe.

What can third countries do to climb the Maturity ladder?

Open Data is no longer a buzzword or a hype but is an essential resource where countries and organisations should reap the benefits from. However, as shown in the maturity report, not yet all countries are equally reaping the benefits of Open Data. What can other countries – not only in Europe – do to climb the maturity ladder and join the ranks with the trend setters?

The European Data Portal will continue monitoring Europe's Open Data landscape, extending its reach to cover new sources of European government data. It will intensify its community-building and advocacy role, disseminating best practice and organising workshops and training seminars across the EU.

You are interested in learning more about Open Data and want to go to Open Data events across Europe? The easiest way to stay up-to-date about further developments is to subscribe to our Newsletter, visit our website or follow us on Twitter, Facebook, Google+ and LinkedIn. The full report is available here. I am starting OpenData advocacy in Ghana and needs support.