No open data? No problem. 5 ways entrepreneurs are fueling open data in the developing world

Open data is creating opportunities for governments to work more efficiently and effectively, for citizens to engage with government and take a more active role in communities, for activists to support their advocacy efforts with facts, for entrepreneurs to bring new products and services to market, and for the bulk of us to be able to make everyday decisions.

On the entrepreneurial side, the World Bank's Open Finances team has been exploring the commercial value of open data, and looking for opportunities to support entrepreneurs. These goals are achievable thanks to governments who have fostered innovation around public data by taking the step to open it. What happens when governments haven't yet opened public data? Is it possible for entrepreneurs to take advantage of open data where it does not exist?

The answer to this sounds a lot like "yes." The opportunity, however, may be more in the data collection and liberation than in simply the consumption.


1. Beat traffic between bus stops
In Nigeria, Tsaboin's Traffic Talk platform crowdsources motorist traffic reports (a la Waze) based on traffic conditions surrounding bus stops in Lagos. Traffic Talk enables users to check their home timeline (a timeline consisting of the bus stops and individuals they are subscribed to), or a general update (which contains every traffic detail from every bus stop). In the absence of an official government feed, the 'crowd' can help each other make 'smarter' traffic decisions. Tsaboin then offers its API (free) for reuse, creating opportunities for others to innovate around the traffic data collected. How's that for open data?

A second example from Nigeria is Prossess, a startup developing sensor-based traffic counters to help "governments understand traffic patterns on selected routes."  The raw traffic data, analytics, and big data insights can then be downloaded. While not necessarily clear whether this data will eventually be open, the Prossess approach illustrates opportunities for startups focused on collecting data.

Crossing the globe to Latin America, there are two examples from regional apps competition, Desarrollando America Latina, which offered the winners a three-month acceleration program with SocialLab (on site in Santiago, or virtually).  Ayni and Dromos, two of the three on-site winners hailed from Ecuador, a country without a government-driven open data program. (Full disclosure: Sandra served on the panel of judges). 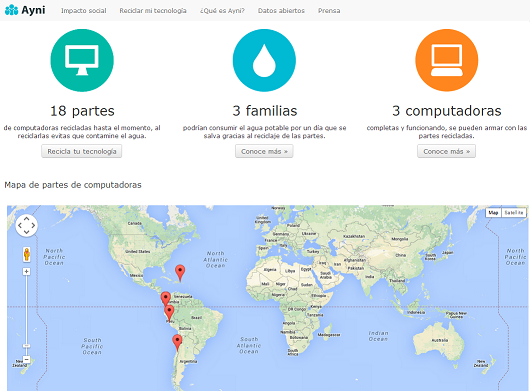 3. Save the planet and join the share economy
Ayni, is a platform which matches individuals who want to recycle electronic products, with those in the market for the electronics (or parts). Ayni's founder, Luis Bajaña, was inspired when he came across public data about electronic waste generation by tech products. Recognizing that Ecuador does not offer municipal recycling of electronics, he looked for ways to avoid electronic waste going to landfills.  He found data published by  Microelectronics and Computer Technology Corporation (MCC) and by Ecuador's National Institute of Statistics and Census (INEC) and opened it. Ayni then consumes (and presents) this data to educate users on impact of recycling (or not recycling) by comparing the landfill process to water consumed by the typical Ecuadorian family.

4. Leverage big data to stimulate walkable cities
Dromos founders were inspired by the concept of walkable cities, hypothesizing that if you facilitate walking, people will walk. They also recognized that open data and big data could boost city planners' ability to understand where to invest in infrastructure to stimulate walkability. The app helps users looking for the most economical routes to move from point a to point b. As with the examples from Nigeria, the Dromos team is creating opportunities in open data by collecting and opening the data themselves. 5. Fight crime alongside local police
Finally, and hot off the press, Crimebot, winners of the Digital Jam 3 grand prize, aim to address crime via anonymous citizen reporting. Their mobile app captures and validates crime reports, provides real-time alerts, and offers safety maps. It also uses official police data and the Crimebot team plans to open the data, free of charge! (Full disclosure: Francesco served as a mentor to this team).

While these examples do not start out as open government data, they certainly point to how entrepreneurs and the private sector can also contribute to the open data ecosystem. The concept of data philanthropy (the use of data collected by the large private organizations for social development) is not new, but why not rethink it as a business opportunity for the world's next greatest entrepreneurs?

World Bank Group Finances is the online access point for IBRD, IDA, and IFC open financial data. The website features datasets that cover loans, contracts, trust funds, investments, and financial statements. A related mobile app, which allows you to “talk” to us more easily about operational and financial data in nine languages, is available for download for Android and iOS smartphone and tablet users at the Google Store and the iTunes Store, respectively. Follow us on Twitter to join and remain engaged in the conversation about the Bank’s open financial data. Great stories and they echo what has happened in developed economies as well. Brightscope for instance started sans open data (lots of information requests to the government in their early days I believe!) - we're counting on entrepreneurs like the ones you mention to push the practical demand side of data.

I love this! Keep it up!

Incredible that world markets are now adapting to open data. There is great opportunity for entrepreneurs globally.

It's in point of fact a nice and helpful piece of information.
I'm glad that you shared this useful information with
us. Please stay us informed like this. Thanks for sharing.