It is to be expected that migrants – a lot of them tend to be young and alone – send more money home, or more of them send money home, ahead of Mother’s Day. This is evident in the monthly flow of remittances to many countries – notably Mexico, Guatemala, Brazil and El Salvador. In Mexico, where remittances last year amounted to $36 bn, larger than its earnings from oil exports, remittances in May tended to be about 37 percent higher than in January, based on data during 2012-2018. Mexican migrants sent more money home, and more of them sent money home, to mark Mother’s Day (see charts). No such increases in remittances during June (Father’s Day, which is apparently celebrated in more countries than Mother’s Day)! 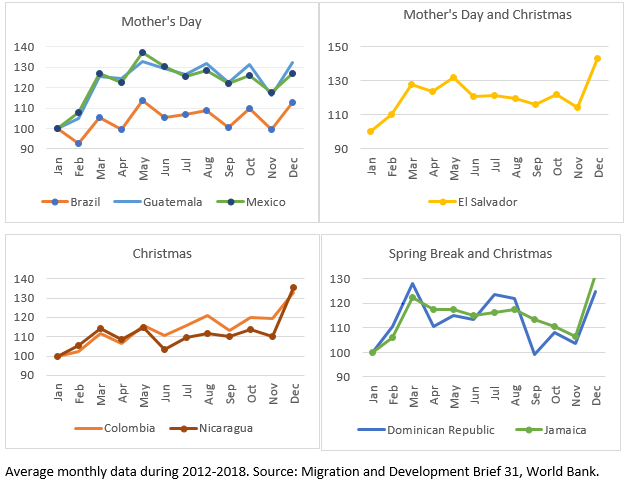 In many countries, such as Colombia and Nicaragua, December marks another or the only peak in remittance flows on account of the holidays. And in the Caribbean countries such as Dominican Republic and Jamaica, the peaks in remittances are observed in March, presumably, due to Spring Break in the United States, and in December, on account of Christmas holidays.

To be able to send money home to support family is perhaps the most important motivation for migration. Remittances provide an economic lifeline to many families in poor countries. And sometimes, the cash received from the loved one abroad has to be used to buy flowers or a meal to substitute for the absence of a key member or members of the family. Migration can be helpful and painful at once. (See article in Washington Post.)

To mothers all over the world, wishing you a Happy Mother’s Day!