Ethiopia’s new diaspora bond: will it be successful this time?

According to the latest issue of the Economist, diaspora bonds an idea worth trying. Ethiopia recently announced the launch of its second diaspora bond: “Renaissance Dam Bond”.

The proceeds of the bond will be used to fund the construction of the Grand Renaissance Dam. This dam will be the largest hydroelectric power plant in Africa when completed (5,250 Mega Watts). The first one was called the Millennium Corporate bond, and was for raising funds for the Ethiopian Electric Power Corporation (EEPCO) . The first diaspora bond issuance did not meet the expectations. Sales were slow during the first months of offering despite the efforts of the Commercial Bank of Ethiopia and the embassies and consulates to sell them. Some risks that the diaspora faced were: i) risk perceptions on the payment ability of EEPCO on its future earnings from the operations of the hydroelectric power; ii) lack of trust in the government as a guarantor; and iii) political risks.

The second bond has some new features that probably can make it work this time: i) the Renaissance bond is being consolidated with the Millenium bond; ii) the government is taking considerable marketing and awareness-raising campaigns to encourage the diaspora to buy it; iii) the bond is being offered in minimum denominations of USD 50 so many Ethiopians can have access; iv) the bond can be transferable to up to three people. It can also be used as collateral in Ethiopia; v) the Commercial Bank of Ethiopia is also covering any remittance fees associated with the purchase of these bonds. The table below shows a comparison between the two diaspora bonds. 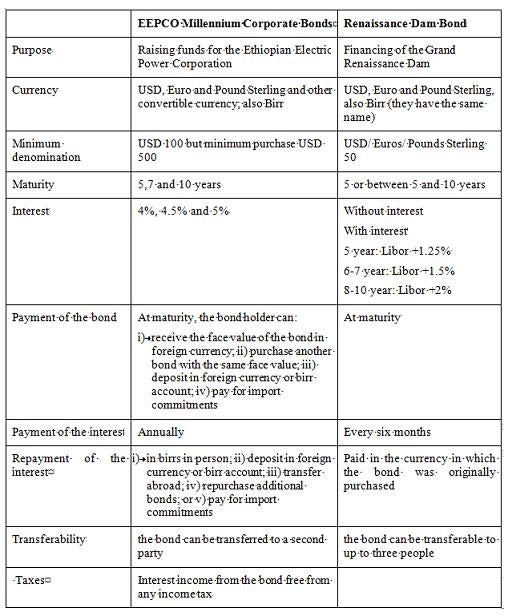 Interesting post. While the new bond have corrected some of the problems faced by the first bond issue, this new bond issue faces the same risks that made difficult to sell the first diaspora bond. Those are i) risk perceptions on the payment ability of EEPCO on its future earnings from the operations of the hydroelectric power; ii) lack of trust in the government as a guarantor; and iii) political and regulatory risks. It would be interesting to see the market reaction to bond issuance, but my impression is that so long as these risks remain the appetite for this bond will be limited.

At face value a bond is an attractive thing and when it is intended to finance the biggest dam in your country even more so. However, There are many questions surrounding the bond issue.Here are my questions and my contention as to why it is hard to buy into the whole concept of a bond with the current government.

1. The annual OFFICIAL inflation is 40% and the coupon rate for the bond is around 5%. Isn't that an out right bankruptcy. A bond is an investment and this so called 'BOND' is no where as close.

2. The government has a huge deficit of trust. Just last week we learnt that they have siphoned of (by a conservative estimate)as much as 11.6 Billion dollars over the course of a decade(http://www.gfintegrity.org/storage/gfip/documents/reports/IFFDec2011/il…).

3. I am not hear to cast aspersions, but there are a lot of credible insiders who contend that the whole project is a bunk. The timing and the manner in which it was disclosed re enforces this contention. We will learn about it real soon.