Implications of “Nitaqat”, Saudi Arabia's Indigenization Program, Likely to be Modest for Migrants 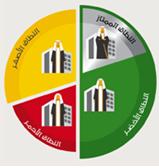 Saudi Arabia's recent indigenization effort titled "Nitaqat" came into effect on September 10. Saudi firms have been color coded to four categories - Red, Yellow and Green, and Blue/VIP.  Firms labeled "Red" will not be able to renew their foreign workers' visas and have until November 26 2011 to improve their status by hiring more Saudi natives.  "Yellow" firms have until February 23 2012 to improve their status and will not be allowed to extend their existing foreign employees' work visas beyond six years.  "Green” or “Excellent” firms with high Saudization rates will be allowed to offer jobs to foreign workers that are employed by firms in the Red and Yellow categories and transfer their visas. And firms in the highest “VIP” category will enjoy the ability to hire workers from any part of the world using a web-based system with minimal clearance.

The percent of natives that Nitaqat requires firms to employ varies from 6% for construction jobs to 30% for oil and gas extraction, to over 50% for banks and financial institutions (for firms with under 500 employees).  As firms rushed to increase their Saudization rates before the deadlines, young Saudi workers were suddenly in high demand. However employers appeared frustrated in matching potential employees with available jobs at the prevailing wages.

“Saudization” or the policy of encouraging employment of native Saudis in the private sector is not new. Similar efforts since at least 2004 have met with little success, with firms using various ruses or “wasta” to meet the quota requirements. Although the current Nitaqat program is better-formulated with quotas that take into account the existing employment patterns, such indigenization efforts are unlikely to adversely affect the longer-term employment prospects of migrants in the Gulf.

Construction firms with among the lowest quota will still find it difficult to comply as Saudi natives would be reluctant to work under the harsh conditions and low wages that migrants willingly accept.  There would also likely be a dearth of Saudi natives willing to work as assistants and cashiers in retail stores. Domestic maids, mainly from the Philippines (the largest category of Overseas Filipino Workers) and from Sri Lanka, have been exempted from the Nitaqat program because of the unwillingness of natives to take up these service jobs.

At the other end, financial firms and bank will find it difficult to reach the high skill requirements.  In the near term, the program could increase wages and  reduce productivity and competitiveness as the labor market goes through a period of adjustment. This makes it likely that the Nitaqat program deadlines would be extended beyond end-November and the rules made more flexible.

Saudi Arabia has four migrant workers for each Saudi native in the labor force. Indigenization efforts will displace only a small fraction of foreign workers, if at all. With high oil prices, the rich Gulf countries are likely to continue to remain dependent on foreign labor for the foreseeable future.