Technology and market developments in the remittance industry

There are currently two notable but divergent trends in the global remittance industry: market consolidation by large players and the disruption potential of small technology driven startups. The former could retard attempts to reduce remittance costs while the latter could accelerate cost reduction. Reducing remittance costs are an important development objective mandated by the Sustainable Development Goals (SDGs).

The retail remittance industry is currently consolidated, and concentrated among Western Union, MoneyGram, and to a lesser extent Ria and others. Rest of the market is fragmented with smaller players facing increasing regulatory costs and compliance requirements. However, the global money-transfer industry is undergoing a significant change in the wake of buoyant merger and acquisition (M&A) activities among the major players (table 1). In January 2017, MoneyGram agreed to merge with Ant Financial, an affiliate of China’s Alibaba Group. But that bid was outdone by Euronet Worldwide in March. In April, Ant Financial and MoneyGram entered an amended merger agreement, by raising purchasing price to $1.2 billion. However, the deal has not been approved by U.S. regulators. The initial deal seems similar to PayPal’s 2015 acquisition of Xoom (table 1), which signaled the emergence of established global players entering the lucrative consumer remittance space. 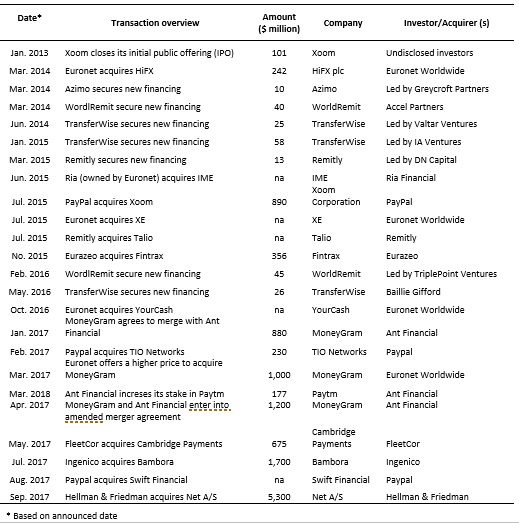 With the success of the Xoom initial public offering in 2013, several digital-first remittance startups have received financing, many of which have embraced new technological developments such as blockchain (best known as the underlying technology behind the virtual currency bitcoin) and peer-to-peer transfer systems. Over the past few years, new entrants have successfully leveraged these digital platforms to compete with traditional remittance providers on scale and fees.

Blockchain is one of the key underlying technologies that could transform money transfer industry. Although most large financial institutions and exchanges are still reluctant to forego traditional currency and cash for the digital currency, acceptance among remittance startups has grown significantly as they utilize blockchain to provide better, faster and cheaper financial services to those who are underserved or disfranchised by their local formal financial system. Some traditional financial institutions are also using blockchain driven platforms for effecting remittance transactions. However, there are also considerable negative associations with the technology, as it is perceived to lack the robustness of the current financial infrastructure. Moreover, regulators across the world are divided about how best to respond to blockchain and related cryptocurrencies. Policy reactions range from cautious optimism to outright calls for banning cryptocurrencies. Therefore, the main friction in technology adoption and consequent cost reduction in remittance transactions comes from regulatory inertia and uncertainty. Good thoughts.
Consolidation doesn't nessecarily increase costs to consumers as this is scale business. As long as there is some competition or prices will continue to trend downwards.
Much more important as you point out is the reconfiguration of the value chain as remittances move online. No high street presence to fund, lower cash logistic costs and efficient / scalable digital compliance and customer management all dramatically lower costs which can be passed on to customers.
As for blockchain? Maybe. The speed is an issue for the mainstream crypto currencies at the moment and it's unlikely that they will solve the last mile delivery in developing and emerging markets. But services like ripple could replace SWIFT and again lower costs for money transfers and in turn consumer.
Lots of reasons to be hopeful in 2018...