The end of the “demographic dividend” in East Asia

In the May 2012 edition of the East Asia and Pacific economic update, I wrote that labor migration across East Asia will require more urgent attention from policy makers very soon given the large labor force declines that some countries will face in the next 40 years.

Most countries in East Asia are expected to experience a decline the portion of their working age population (15-64 years) to total population (Fig 1) from now until 2050. Seven countries are expected to see declines of 10 percent or more (including China, Japan, Thailand and Vietnam) while three will see declines of over 20 percent (Hong Kong SAR China, Korea and Singapore).

These demographic trends may, all else equal, have an impact on future levels of economic growth. To get a sense of the potential magnitude of the impact, I decomposed the growth in GDP per capita from 1997 to 2008 into (1) growth in GDP per employed person (aggregate labor productivity), (2) growth in employment as a share of the working age population (employment rate), and (3) growth in the share of the working age population to the total population. The relationship used is:

where POP is the total population, EMP is the employed population, and WorkingAgePOP is the working age population. The growth in GDP since 1997 owes much to growth in aggregate labor productivity with demographic change being the second largest contributor (Fig 2). Some of the countries that have benefited the most from a positive demographic contribution to growth—China, Vietnam and Mongolia—are among those expected to experience the steepest declines in their working age populations over the next few decades. However, one must certainly be cautious in making judgments on the impact of demographic decline on growth as noted in a number of papers including interesting paper by Bloom, Canning and Fink.

Yet, given the potential impact of demographic decline in some of the high growth East Asian economies, a key question concerning international migration in East Asia is not whether it is desirable, but how policies should be designed so as to positively enhance the returns of international labor flows for sending and receiving countries and migrants. As one sign of the challenges ahead, just promoting more migration is a key first step: as the tight distribution of the plots around the horizontal axis on Fig 1 illustrate, most countries experiencing demographic decline huddle around the axis and have thus about zero net migration while quite a few countries (Indonesia, Mongolia, Myanmar and Vietnam) are losing population to emigration and demographics. 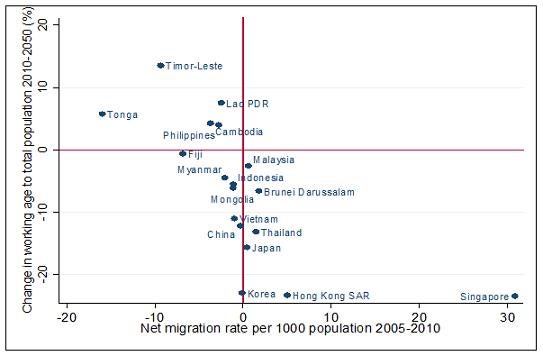 Fig 2. Growth in East Asia has benefitted from a "demographic dividend" average annual growth rate in GDP per capita and its components, 1997-2008. 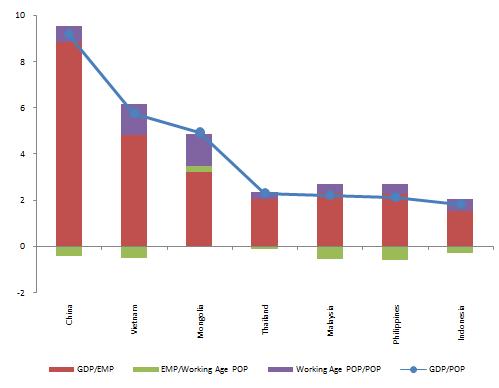