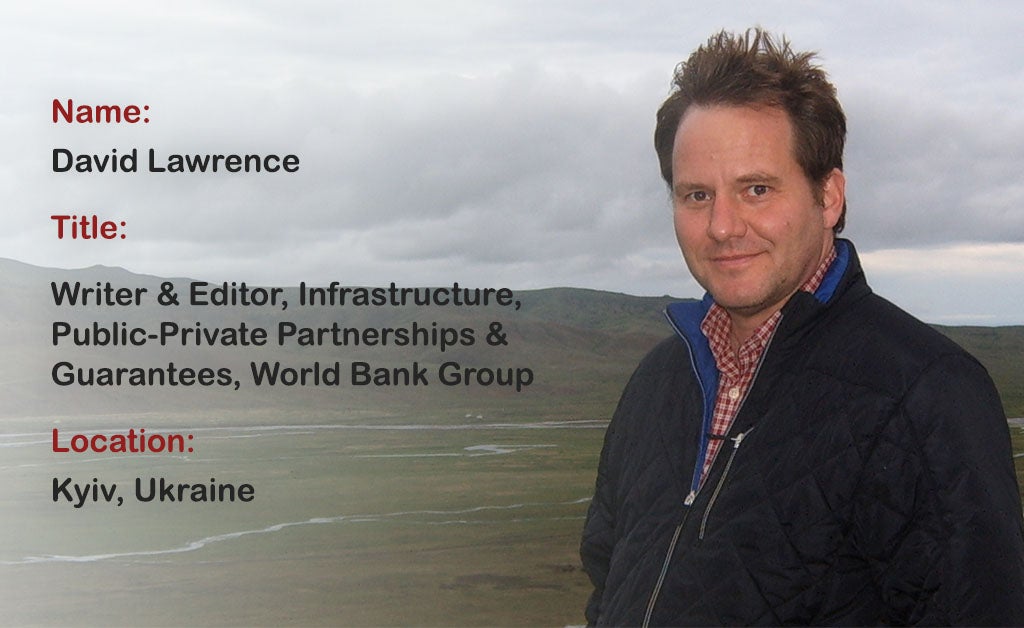 Editor's Note:
Welcome to the “10 Candid Career Questions” series, introducing you to the infrastructure and PPP professionals who do the deals, analyze the data, and strategize on the next big thing. Each of them followed a different path into infra and/or PPP practice, and this series offers an inside look at their backgrounds, motivations, and choices. Each blogger receives the same 15 questions and answers 10 or more that tell their career story candidly and without jargon. We believe you’ll be as surprised and inspired as we were.  For examples of other entries on the IPG blog, click here.

When I was 7, my great-grandfather paid me 25 cents for picking cherries in his orchard. I was blown away to have earned so much for such easy work (at the time, a comic book cost 15 cents). But my first real job was in a lobster & steak house, where I worked one summer as a busboy when I was 16. Most of the waitresses were college students who brought me tons of food and desserts from the kitchen. It was the happiest summer of my life.

For two years, I ran IFC’s office in Banda Aceh, Indonesia, after the 2004 tsunami. Following local customs, we worked in the office barefoot (shoes were not allowed). A stray cat had kittens, which I often found sleeping on my office chair. We had plenty of geckos, and even a monitor lizard. The team was great and we had excellent support from the Jakarta office. I also loved living near the ocean and mountains...I went biking and/or diving almost every weekend.

3. What do your family members think you do all day at work?

My wife isn’t convinced that I know anything about infrastructure and PPPs, and often suspects I’m writing a secret, personal blog. My kids, being teenagers, already know everything so they don’t need to waste time thinking about my work.

4. What do you really do all day at work?

I help smart people put blog posts together that share their knowledge and expertise of PPPs and infrastructure. Many of them are super busy and don’t have much time for writing, so my support unearths hidden treasures. I also help other clients in the World Bank Group by turning corporate jargon into interesting stories for ordinary people to read.

5. What do you wish you did all day at work?

I wish I had more time to write for myself, go exploring and learn languages (I’d like to learn Ukrainian, French and Esperanto). But what I do now is probably the most fun I have ever had at work, and I’ve done a lot of different things in many different places.

The PPP Knowledge Lab is my favorite, though I also go to a site I built for a USAID-funded PPP project in Ukraine.

7. What did the book that made the biggest impact on you professionally teach you?

Believe it or not, Steven King’s On Writing gave me the courage to quit full-time work with IFC and become a writing consultant. It taught me there is always a way to marry writing to your work. The funny thing is I’ve never read anything else he’s written.

8. What are you shocked to hear yourself say when you give advice to young professionals?

I often hear myself assuring young professionals that the issues facing them aren’t career-busters and to take it easy. Life’s too short and other things, like your kids, are more important. The biggest shock, though, is that any young professional would listen to anything I say in the first place.

9. What is the most rewarding thing you have experienced during your Infrastructure and PPP practice?

I was thrilled when the PPP & Infrastructure blog was established in 2015 (it was called PPP Realities then). I’ve been blogging for the World Bank Group since 2006 (I started in Aceh) and had argued for a PPP blog since 2010. It turns out this blog is a great way to spread the word about PPPs and infrastructure in development, while giving voice to people working in this area.

10. In what ways do you think the Infrastructure and PPP area you work in will look different in 10 years?

I’ll probably be out of a job in 10 years’ time. By then, infrastructure objects will have their own blogs and twitter accounts, written by bots. So your local bridge or sewer system will be able to post about recent accidents or complain about sloppy maintenance. Maybe they’ll manage PPP transactions for themselves, when the need arises. It should be interesting, whatever happens!

Is there a connection between PPPs, climate change, and life insurance? Turns out there is

In my agency back here in the Philippines,the Department of Education, we also use PPP System in order to acquire school buildings through partner agencies.

In responding to the question , what are you shocked to hear yourself say when you give advice to young professionals ?, asked to Mr. David Lawrence , one can argue that young professionals are very smart ,but they always want to do things their own way , they do not listen to older professionals as much as they respond to modern means of communications and media.
Yours Very Respectfully,
Dr. Mohamed Taher Abdelrazik Hamada, Ph.D

The last answer is really hilarious. Interplay between bots and infrastructure objects.