How to protect infrastructure from a changing climate 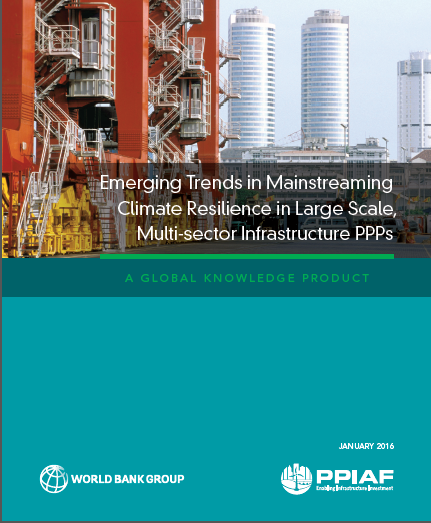 Every other month the news seems to flash images of extreme weather – disastrous heat waves, floods of biblical proportions, and epic storms.  On the rise as a result of a changing climate, these weather events can cause a myriad of damages and put the world’s critical infrastructure at risk. This costs money. The devastating 2010 floods in Pakistan caused close to $2 billion in damages to physical infrastructure, according to World Bank estimates. And Hurricane Sandy wreaked $1.13 billion in damages on New York City’s infrastructure alone (New Jersey and other parts of New York State saw significant damages as well).

Alongside these increasing climatic risks to the world’s existing infrastructure assets, the fact remains that many countries desperately need more and better infrastructure. This is particularly true for developing countries.  To meet the future infrastructure demands of these economies would require investment of at least an estimated additional $1 trillion a year through 2020.

That’s because the dams, power plants, and roads built today must withstand not yesterday’s or today’s climate, but a future climate that is variable and unpredictable. This presents an opportunity not just for the nations that will ultimately house this infrastructure, but for the decision makers involved in developing and financing infrastructure assets that can withstand climate change.  Officials, advisors, and funders involved in developing public private partnerships (PPPs) for infrastructure share in this opportunity to make a difference in how resilience is mainstreamed into infrastructure projects.

PPPs are gaining importance in many developing countries as a way to finance infrastructure assets. However, to date, the traditional risk allocation frameworks for PPPs include limited consideration for climate change risks. This failure to consider climate risks is further exacerbated by a lack of knowledge and appropriate incentive structures in dealing with adaptation and long-term resilience for infrastructure PPP arrangements.

There is increasing need for decision makers involved in the public investment process including that of PPPs to both understand how climate change risks could affect their investments and how to mitigate those risks through financial instruments.

Recognizing that scope probably exists to embed climate considerations into the PPP process, PPIAF, along with the Climate Change Group of the World Bank Group, supported a new paper, “Emerging Trends in Mainstreaming Climate Resilience in Large Scale Multi-Sector Infrastructure PPPs”.  It found that extensive bodies of knowledge exist on climate risks to infrastructure and on how to implement PPPs for infrastructure, though there is little overlap between them. This report presents a synthesis of insights from both areas, building on interviews with experts from multilateral development banks, analysis of national policy frameworks for PPPs and adaptation, and a literature review, to identify where these topics do and should overlap.

PPIAF has already begun building on this research to evaluate ways to include climate change considerations into the PPP development process. A related new issue brief from PPIAF, “Climate Risks and Resilience in Infrastructure PPPs: Issues to be Considered,” details how to operationalize the integration of climate considerations into PPPs.  This publication provides a preliminary review of PPP contractual arrangements and identifies overarching concerns related to their inflexibility in terms of how climate risks are managed under the existing PPP risk allocation frameworks. Gaps and constraints in existing PPP contractual protection measures are also discussed. The paper aims to engage PPP practitioners as well as governments and their advisors in a broader discussion on how a paradigm shift in thinking will be needed in the way Infrastructure PPPs are planned, developed, procured and implemented.

Have a good idea for "a paradigm shift in thinking"? Please share with us by leaving a comment below! The UNECE International Centre of Excellence in Public Private Partnerships (IPPPRC) recently authorized the International PPP in Resilience Specialist Centre to provide development standards, foster innovation, provide education, and serve as a resource to other PPP Specialist Centres on resilience integration into PPPs of all types. On March 30-April 1, a forum on integration of PPP into the UN SDGs was held in Geneva, and PPP Group Senior Direcrot Lawrence Carter gave an excellent presentation on the need for PPP in a wide variety of areas, including resilience. As Chairman of the IPPPRC, I am very interested in establishing a mutually beneficial relationship with the PPIAF and the Climate Change Group. Please contact me at the e-mail address above, and thank you for publishing such an important work on this critical issue.

I am working on a series of short papers to be produced by the IFC chief economist office on resilience, insurance and private investment. Would like to reference your activities at the Centre as a source for updates and future ideas. Alan Miller

good afternoon all: I'm very interesting... for your news.. and usuel material PPP.. now in my country it's material academic and local people rural..

At present I am a student of Master in Philosophy(Anthropology)First Semester in Tribhuvan University, Central Department of Anthropology, Kirtiput, Kathmandu, Nepal.Also, organizer and implementer of a Non Governmental Organization (NGO) naming the Buddha Health Promotion and Education Center(BHPEC), the aim and objective of this organization having thrust to sustainable protection of environment and health promotion. This organization has established at Rajbiraj municipality, Saptari, Nepal.
Also, me long experience of government jobs in health sector in relation of training, communication and health promotion at different levels.
I can get leave from university to join and complete this course.
Hopefully, I can do and make effective and sustainable change in developing countries. Thanking you.
Sincerely,
Lakshmi Narayan Deo

There is need to mainstream and develop Building Codes and Standards that are Climate Change Resilient for infrastructure projects. The Climate Change Resilient Codes and Standards should be part and parcel of procurement requirements, procedures, best practices and practices. Non compliant developers should be held accountable and responsible for failing to address climate change resiliency in infrastructures projects. The value addition is for solving future climate risks, reducing property loses and damages and transforming infrastructure development. Long term benefits will accrue to the poor who at the moment are most vulnerable to effects of climate change, continuously pay taxes for poor services and decaying infrastructure at the expense of their increasing Marginal Social Costs, high cost of living and looming poverty.

I am a student of Master of Philosophy in Anthropology First Semester in Tribhuvan University, Central Department of Anthropology, Kirtipur, Kathmandu, Nepal. I have long experience of government job in health sector specially training, communication and health promotion.
Also, affiliated to a Non Governmental Organization (NGO) naming as Buddha Health Promotion and Education Center (BHPEC). This organization has situated at Rajbiraj Municipality,Saptari, Nepal. One of the prime scope and objective of this organization is the environmental protection and sustainable change and health promotion.
If this opportunity provided me, I can mange leave from university. Thanking you.
Regards,
Lakshmi Narayan Deo

I think it is important to mainstream CCA in PPPs infrastructure development plans but first and foremost build capacity of officials from both public and private sector in all aspects of DRM and CCA especially in developing countries, where these are just emerging concepts. As a matter of fact, the infrastructure being constructed today may not last for a long time because of corruption, even before the disasters strike, structures are just collapsing before completion!! World bank need to invest a lot of resources in capacity building for PPPs in DRM and CCA.

Embedding climate and environmental considerations into infrastructure development projects is critical in today's world. Nowhere is this needed like in developing countries and especially in Ports. Now the major problem is that even the Policy framework is non-existent, capacity development is needed while financing is often a major challenge. For the Port of Mombasa, we helped to prepare a Green Port Policy that resulted in development of Mombasa Port Resilient Programme that is being funded by the International Climate Fund through DFID to the tune of USD 36 million. 13 work streams are being implement to improve environmental management, reduce greenhouse gas emissions and develop resilient infrastructure for the Port of Mombasa. Already significant success has been noted but much more still needs to be done at the Port vicinity but moreso throughout the transport chain.
Samuel Helu
Mombasa Programme Manager
TRadeMark East Africa
NAIROBI/MOMBASA
Kenya
Tel: +254-721155547

The World Bank needs to develop detailed, down-to-earth, and hands-on guidance manuals for the poor developing countries on how to adapt, and build resiliency in drinking water and sanitation facilities (water and wastewater treatment plants, water distribution system, sewage conveyance system)), in the wake of climate change. The Bank should pay attention to this aspect. Almost all poor developing countries simply do not know as to how to cope up with the impacts of climate change (adaptation and resiliency) in drinking water and sanitation sectors.

Have to build infrastructure in the USA high and strong. http://lit-critter.blogspot.com/2016/12/story-of-usa-to-rebuild-infrast… Perhaps China can help.

It is clear that climate changes affected negatively global infrastructure causing unpredictable damage that can not be estimated or substituted easily ,as mentioned in the above article , we have examples in Pakistan and in New York city as described by the World Bank , such damages do not make any differences between developed or developing countries , but of course the risk in developed countries is more less than in the developing countries.
One can argue that the unpredictable risks of climate chnges are very dangerous to PPPS corporations , that is why such perspectives should be studied thoroughly and very carefully by the experts of the World Bank and all available local and international interested agencies in the field of environment protection
These climate changes should be introduced as part of the body of the feasibility studies of PPPS projects , specially in infrastructure.
Yours Very Respectfully,
Dr. Mohamed Taher Abdelrazik Hamada, Ph.D
Retired Professor at Strayer University, USA
Address
[redacted]