Market reforms are worth the effort

Recent conversations I have had about the value of regulation and private participation in telecoms has prompted me to do some quick calculations using the Caribbean as a test case. The results? Market reforms have had significant impacts in the region.

Reforms in the Caribbean began in the late 1980s although start times vary greatly across the region. Drives varied, including prompting by the World Bank Group, by the United States, and by potential private investors. Sometimes leading countries in the region served as examples for others to follow.

Figure 2 shows my estimate of the impact of reforms in the region. The “Actual” line shows the reported fixed + mobile teledensity in the region from 1975 through 2015. It was around 3.5 in 1975 and stood at around 133 in 2015. What would it have been like if there had been no reforms? The line “Estimated” is my estimate. It appears to me the reforms made a 38-point difference in teledensity in 2015. This equates to about 2.6 million more mobile phones and 66,600 more fixed line phones. Competition accounts for about 16% of this additional growth, and privatization and effective regulation account for the remainder. 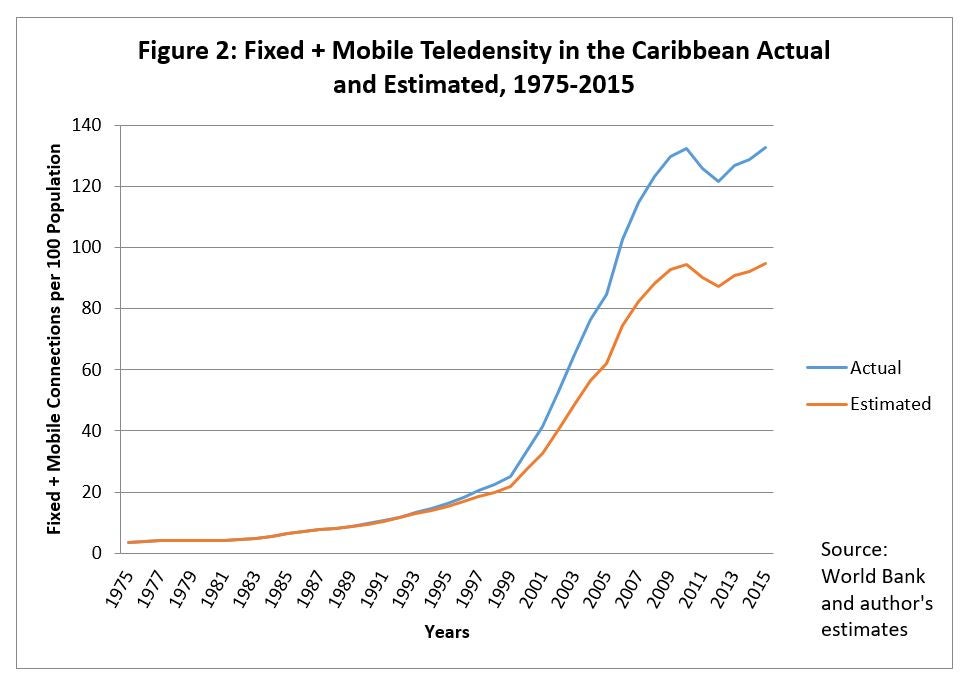 How did I do these estimates? There have been numerous studies of telecommunications reforms, but I chose a study by Scott Wallsten (Journal of Regulatory Economics, 2001) because it provides clear results for calculating differences. Using his study I estimate that competition, privatization, and independent regulation bumped telecommunications growth by 50% in the region. I construct the “Estimated” line in Figure 2 assuming that reforms began in 1990 and took about 10 years to progress across the region.

This isn’t to say the reforms have been easy or that effective regulation is a done deal. But the rewards to customers appear to be worth the effort. As , i illustrated before , the developing countries can not develop positively
without the real honest contribution of the developed counties.
From your recent Article written by Mr. Mark Jamston, it is concluded that the Carribean experience in it's way of development benefited from the United States in terms of the World Bank and it's other investment agencies.
Thus , one can find that competition in the Caribbean has played a major role for development of Teledensity, and one can not ignore the share played by the private sector.
This kind of competition accompanied with privatization can be imitated and borrowed from other developed countries and adopted in a way that fits the circumstances of the assigned developing country.
Africa is in need of such active competition and privatization that stimulate investment in a way that help Africans to have access to the right health services and right education to have prosperity and welfare in the whole region.
Yours Very Respectfully,
Dr. Mohamed Taher Abdelrazik Hamada, Ph.D
Retired Professor at Strayer University, USA
Address [redacted]

Dr. Sir! I would like to partner your likes(foreign partners) in my PPP in education and the likes in Nigeria.I would like you afford me that opportunity.My mobile:+2347065263037 e-mail:[email protected] in anticipation!

The cell phone and the solar technologies, have greatly transformed the rural communities. Would you mind checking figures for Kenya, Rwanda, Uganda, Senegal. At times, reforms generate un expected or hitherto un thought of, new opportunities and innovations. I would urge Development practitioners to always seize the opportunities and support such outcomes, yes with the state taking the lead. Banking and finance, health, education, Agriculture are the main sectors that will benefit and bare the brand and costs of lost opportunities, that could have been harnessed when the moment was ripe! Thank you for this shot.