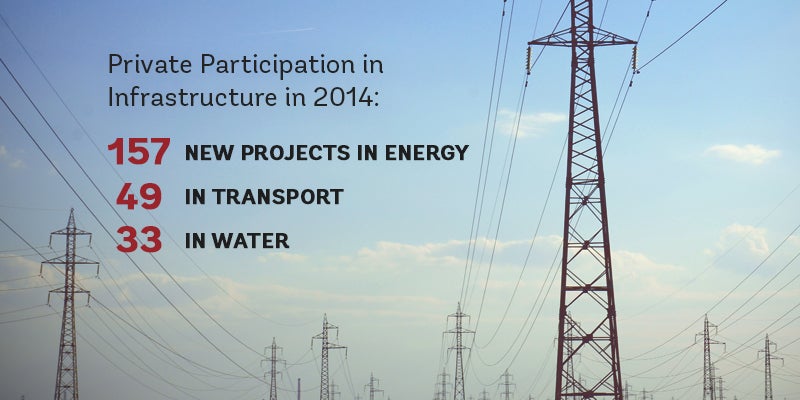 Imagine record commitments in transport that are 26% higher than the next best year since the inception of the Private Participation in Infrastructure (PPI) Database in 1990. That’s exactly what took place in 2014—massive private participation in transport that culminated in the fourth highest level of global investment (transport, energy, and water) ever recorded. Indeed, the PPI Database’s 2014 Global Update released in June, 2015, shows that total investment in transport hit a record high of US$36.5 billion, driven by a handful of outsized deals in
Latin America and, more specifically, Brazil—including a mega airport project totaling US$10 billion. Meanwhile, energy fell 19 percent year-over-year due to fewer commitments in five out of six regions, while water grew 14 percent, driven by key deals in Brazil, Mexico, and Peru. In a separate report, Telecom showed modest year-over-year declines, extending a trend of fewer projects and lower investment over the past five years.

The newest Sector Updates takes a closer look at these findings. Available today from the World Bank Group’s Private Participation in Infrastructure (PPI) database, four individual reports on energy, transport, water, and telecom offers information and analysis on the trends within each sector. Interested in learning more about the subsectors that drove investment? Or which renewable technology was most prevalent? Was it solar? Perhaps it was wind? How about the number of new projects versus capacity expansions in telecom? To find out, click here.

Overall, Latin America by far dominated the investment landscape, commanding 82 percent of transport commitments, nearly half of all energy investment and 90 percent of water commitments. In contrast, South Asia, driven by declines in India, fell significantly below its five-year average annual investment in both energy and transport. Countries showing considerable investment activity include Peru, Colombia, Lao PDR, Turkey, and Thailand, which all had significantly higher PPI year-over-year.

Although transport had the greatest investment, the sector with the most new projects was energy with 157; transport had 49 and water trailed with 33. The trend toward fewer but larger projects dominated the past decade, but preliminary H1 (the first half of) 2015 data indicates this may reverse. Stay tuned for the H1 2015 Global Update- available soon- to find more.