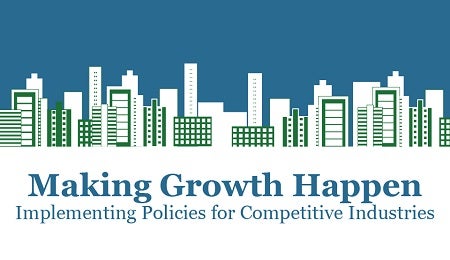 We’re now a week away from the Competitive Industries conference on “Making Growth Happen” on October 16 and 17. With more than 20 high-level speakers – including our keynoters Joseph Stiglitz and Don Graves, and with more than 500 internal and external participants already registered – the conference seems poised to be a landmark event.

Through this conference, we aim to start a discussion on a controversial topic in a non-controversial way.  Prominent academics, from Stiglitz to Dani Rodrik, have explained that the world is turning massively to industrial policy pushes.  The U.S. government, through Graves’ work at the President’s Council on Jobs and Competitiveness, is demonstrating that this movement is also affecting the countries that have the strongest reputation for non-interventionist economic policies.  Nevertheless, these approaches are complex and difficult to implement, and they run the risk of allowing rent-seeking behavior and economic distortions without social returns.

We therefore also wanted to hear from other economists, and we launched a call for papers, asking for new ideas and research on the theme of the conference: the “how to” of growth and jobs. We wanted to focus attention on possible lessons that could have immediate policy implications in our country work.

The Selection Committee for these papers was composed of Vijaya Ramachandran of the Center for Global Development (CGD); Shanta Devarajan, the World Bank Group’s Chief Economist for MENA; Mary C. Hallward-Driemeier, the Lead Economist in DEC; Martin Rama, the Chief Economist for South Asia; and myself. We are pleased to announce that the winning papers are:


This is a diverse set of papers, ranging from rigorous studies of individual policies to new frameworks for thinking about policymaking.

“The Perils of Industrial Policy” is a fascinating and rigorous analysis of the difference in performance among firms connected to the Ben Ali family – some 220 in all – and those that were not, under the rule of Zine al-Abidine Ben Ali in Tunisia.

It finds that the introduction of new investment climate policies, such as FDI restrictions and authorization requirements, were influenced by firms that were connected to the Ben Ali family. While the perils of “regulatory capture” are well known, especially in regimes with a high risk of cronyism, this paper provides a uniquely rigorous and thorough exploration of how it happens and its effects.

“Are the Benefits of Export Support Durable?” also deals with Tunisia, although with a more specific policy and over a longer time frame. Many of us are familiar with export-promotion programs, which have been extensively used in Europe, East Asia and the United States. Aside from some controversy as to the indirect subsidies provided to firms via these instruments, their long-term impact had rarely been evaluated.

This paper uses the FAMEX program in Tunisia to examine what happens over the long term – in this case, over a three-year period. Firms that were supported by the program did see an initial bump in growth. By the third year, this differential impact had disappeared, and there was no significant difference between the recipient firms and the control group. This paper should give us pause about the impact of such programs. It should also motivate tracking their impact over a longer time before declaring success, and it should inspire further research into their performance in other contexts.

“Learning Within the State” starts from a comparison that has been made often in the last year, that of China and India. It argues that the difference in development outcomes between them over the last three decades – a difference that affects almost one-third of humanity – does not come from any one specific area of policy, but from the superior ability of the Chinese state to learn.

The paper then constructs a framework for understanding and studying policy learning in the state. It builds some formal models related to the promotion of bureaucrats, and then identifies areas for further research and empirical analysis. It complements the work Stiglitz will present in his keynote address on learning in society, by asking what it means for the state to learn. That discussion will surely toss up a range of provocative ideas.

“Who Captures the Value in Innovation?” returns to the very specific, with a detailed case study of a specific innovation, that of the science behind the massive increases in hard-drive capacity of the last decade and a half. Written by Jason Dedrick and Kenneth Kraemer, it analyzes the discovery, development and commercialization of “giant magnetoresistance” (GMR) technology.

This is the technology that allowed hard disks to increase in capacity by 100-fold or even 1,000-fold in the late 1990s and early 2000s. The science behind it was discovered by German and French scientists who then won the Nobel Prize. But none of the commercial value was captured in Europe: Instead, American and Asian firms commercialized it. The paper explores the reasons for this, tracing it back to policies on “national champions” and competition in the technology industry.

Beyond the winning papers, we had a strong shortlist, and all 10 papers from that shortlist will be published on the conference website after the event. Taken together, it’s a fascinating collection of research, from which the Selection Committee learned a great deal.

I hope you’ll join us on the second day of the conference (October 17), when each of the winners will present their research findings at a seminar. You can find the agenda here.