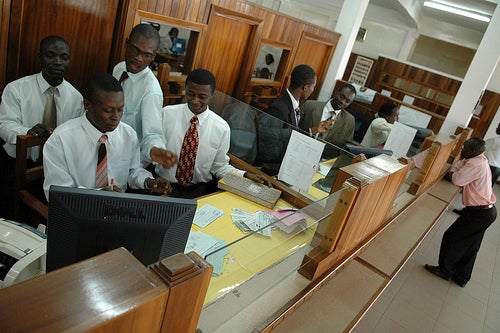 In 2009 I came to Tanzania to work on tax harmonization in the East African Community (EAC). The Common Market Protocol was about to be signed and one of the biggest goals was to tap into the economic potential of the region by facilitating (cross-border) trade and improving the business climate. A year later, the five Partner States of the East African Community ratified the Common Market Protocol in order to realize “accelerated economic growth and development through the attainment of the free movement of goods, persons, labor, the rights of establishment and residence and the free movement of services and capital”. The overarching goal of the East African Community is to achieve sustainable economic growth in order to increase employment and reduce poverty.


EAC’s economy is growing fast. During 2005-2010, the per capita income growth reached 3.7% a year in the EAC, compared to 3.2% for Sub Saharan Africa as a whole, almost quadrupling the rate achieved in the previous 15-year period. However, it is not enough to have a big regional market. In order to achieve sustainable and broad-based growth, it is crucial to set up a well-functioning market with appropriate and efficient regulations which create a business friendly environment – especially for small and medium size companies. Currently, the EAC is named by TradeMark East Africa as the second most expensive region in the world in terms of transportation – this is only one of the major obstacles for regional businesses. 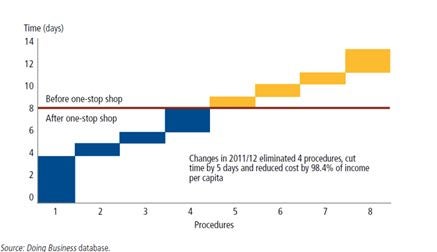 Burundi made starting a business easier with a one-stop shop for startups
This month we launched the Doing Business in the East African Community report 2013 in Kigali. Coming back to the region after quite some time I was curious about the discussions focusing on the current status of the ease of doing business in the EAC. The emphasis of the event has been on what has been achieved and the opportunities ahead for private sector development in the East African Community. Over the past eight years, the five EAC countries have implemented 74 institutional or regulatory reforms improving the business environment for local entrepreneurs with most reforms taking place in the areas of starting a business, registering property and dealing with construction permits. In the last year the five EAC countries implemented a total of nine regulatory reforms to facilitate doing business. Examples of successfully implemented reforms are the creation of a one-stop shop for starting a business in Burundi, the strengthening of investor protection in Burundi, Rwanda and Tanzania and the introduction of a collateral registry in Rwanda.

Simply looking at the number of reforms gives us a very positive picture of the region’s progress. However, the overall ranking in the EAC has stayed the same over the last 4 years as other countries and regions improved more. A closer look reveals as well two major challenges: (1) how diverse the different reform paths of the five countries have been and (2) how huge the variation in the rankings of the different areas is. For example, in starting a business, the EAC average ranking is 84 with a variation between 8 (Rwanda) and 144 (Uganda).

While we know you can’t simply transfer good practices between countries, peer to peer learning can help with that challenge. To realize the full potential of the Common Market it is crucial to promote the exchange and discussions on different approaches and national reform programs to support private sector development involving key regional private sector organizations such as the East African Business Council. Why are there so few peer-learning mechanisms in place which would allow the countries to learn from each other on a regular basis? The EAC Private Sector Development Strategy from 2006 states that “the regional economy is handicapped by the absence of a common approach to encouraging the private sector”. The adoption of the “Consultative Dialogue Framework for the Private Sector, Civil Society and Other Interest Groups in the EAC Integration Process” in November 2012 aiming at deepening the coordination between the EAC, Partner States, private and civil society organizations was a first step in the right direction. However, there is still no effective common framework in place which facilitates the coordination of reform efforts in the area of business regulations in the EAC. Indicators as the Doing Business report can help to identify shortcomings in business regulations, to stimulate the political debate and to indicate where to find peers from which inspirations and ideas can be obtained.

However, in order to spur the economic development in the EAC as a region and to develop a “regional brand”, ambitious national reform agendas have to march hand in hand with coordinated private sector development reform efforts.