“When my information changes, I alter my conclusions. What do you do, sir?”

That quote is usually attributed to John Maynard Keynes, and it was popularized by Paul Samuelson. Some say it was invented by Samuelson. It’s one of my favorites: a warning to us about confusing consistency and dogma. It has been coming to mind lately, in the run-up to to our conference on “New Growth Strategies” and its keynote address by Dani Rodrik.

This is because there seems to be an evolution happening in Rodrik’s ideas. Here at the World Bank Group, he is probably best known for his opposition to “one size fits all” growth models, such as the Washington Consensus, and his development of what is now called “new industrial policy.” This drew on extensive empirical evidence on everything from the technological sophistication of exports, to processes of cost discovery among firms, to the effect of currency devaluation. At the micro-level it led to the injunction to experiment, fail fast, and learn; and at the macro-level to the advocacy of, among other steps, real-exchange-rate depreciation. In the Bank itself, these ideas came to particular prominence under our former Chief Economist, Justin Lin.

But Rodrik’s recent papers may signal a subtle shift. A longstanding objection to neo-classical growth theory is that it predicts unconditional convergence between rich and poor economies, yet, instead, we’ve seen persistent divergence. So convergence is often made conditional on “fundamentals,” a catch-all term that ranges from human capital to institutions to geography. 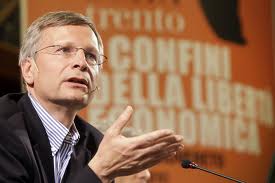 In a paper in the Quarterly Journal of Economics last year, though, Rodrik showed that there is unconditional convergence, at least in labor productivity, but only in manufacturing.

He called such sectors “escalator industries,” because they can drive growth even if the “fundamentals” remain poor, so long as there is structural transformation. This buttressed his argument for exchange-rate depreciation, which provides large implicit subsidies to such industries. The argument is similar to Joseph Stiglitz’s that some industries “learn” faster than others (notably manufacturing), generating large externalities that merit special treatment.

But now Rodrik seems to have turned pessimistic.  At the Center for Global Development six months ago he delivered a paper on growth in Africa, citing research by Alan Gelb and Vijaya Ramachandran that costs on the continent are too high, limiting the potential for such escalator industries. This led naturally to his earlier arguments about exchange rates, but then he seemed to implicitly disavow those, stating:

“Yet I have the suspicion that the obstacles industrialization faces in Africa are more deep‐seated, and go beyond specific African circumstances. For various reasons that we do not quite understand, industrialization has become really hard for all countries of the world.”

He then considered alternate strategies to industrialization, including agriculture-, services- and resource-led growth, being somewhat pessimistic about all of them.

Where does that leave us? Back with only the long, slow grind of improving the fundamentals? Is this the beginning of a disavowal of "new industrial policy," or at least a much-diminished view of its potential?

I hope we will find out more next week, both in Dani’s presentation and in the panel that follows it. For now, I’ll share two small thoughts about where we might find some optimism.

The first is in another strand of Dani’s recent work, on the role of ideas in generating new possibilities for growth. In a paper in the Journal of Economic Literature earlier this year, he built a model of how new ideas can shift the curve of economic possibility.

The model worked by analogy to the way new technologies can shift the production curve outwards. It related principally to overcoming the opposition of domestic elites opposed to losing their rents (as in the theories of Daron Acemoglu and others). I wonder if this can be generalized? That is, can new ideas about growth shift the possibilities across countries? If so, we will need some way to keep track of such new strategies, to evaluate them, and to learn.

That leads to my second thought, which relates to institutions. As Rodrik points out, traditional definitions of “good” institutions correlate to long-run levels of development, but not to short- or medium-term growth. Maybe, though, we need to rethink what “good” institutions are, from the perspective of growth?

The usual definition is often static and relates to form over function. It relates to big, system-level features, such as “rule of law.” What may count, though, are more detailed and granular features of institutions, such as how flexible they are and how well they learn. What we may need are institutions that are able to find new ideas, process them, and then evaluate and change on the fly. Some call this ability “recursion”: the ability to alter plans during implementation based on feedback from the market (or, more broadly, from society).

It might be that such institutions, combined with new ideas – or new understandings of old ideas – will be able to find new paths to prosperity. Put another way: New institutions and new ideas might combine to change our minds again about the possibilities of structural transformation, even offering a route out of “secular stagnation.”  It is fitting, then, that we will have a panel on institutional reform to close out the first morning of our conference.

I hope we’ll have a lively debate on these issues then and throughout the conference, and I hope you’ll join me there!