The Economic Cost of Gender Inequality 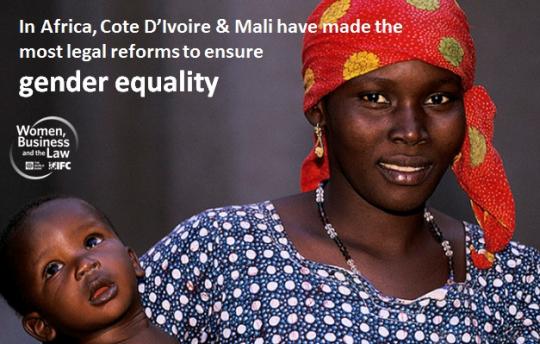 Madame Ngetsi of the Democratic Republic of the Congo is one of thousands of women in the world who—despite their talent, drive, and potential to contribute to the economic development of their countries—may never be able to fulfill their dreams of starting their own businesses. Their dreams may be dashed because of outdated legislation that reproduces debilitating gender roles.

If she were a man in the DRC, Madame Ngetsi’s initial steps in starting her business would be to obtain a certificate confirming the headquarters location, notarize the articles of association, and register with the Commercial Registry.  As a woman, however, a significant roadblock stands in her way:  She is legally mandated to first obtain her husband’s permission to register a business.  This legal requirement, found in the family code rather than in any commercial or business code, is fully in effect in the DRC.  Permission letters are readily found on file at women-owned company registries.  Married men face no such requirement.

Our latest Women, Business and the Law report finds that almost 90 percent of the 143 economies studied in the report have at least one legal difference restricting women’s economic opportunities.  From laws that require married women to obtain their husbands’ permission to register a business, to regulations that prohibit women from working in certain industries, these restrictions can have implications worth millions of dollars on a national level.

Countries have been eagerly seeking ways to create business-friendly environments and stimulate their economies.  So why don’t they tap into the financial potential of women?  The answer is: They are starting to.

In a sense, Madame Ngetsi is stuck in an anachronism.  Another report from the World Bank Group, the 50 Years of Women’s Legal Rights Database, shows that, since 1960, at least two dozen economies (out of the 100 economies covered) have eliminated laws allowing husbands to restrict their wives’ ability to work.  The 2014 Women, Business and the Law report finds that the number of economies with this restriction has since dropped to 15.  Most recently, Western Africa has been a leader in adopting reforms.

Mali made several reforms in the past two years toward gender equality.  It abolished differentiations whereby a husband could prevent his wife from working, and it adopted a succession law with equal inheritance rights for spouses.  Lack of access to land is a significant barrier to women’s financial inclusion.  But with stronger property rights, women’s potential for business productively increases.  In Mali, for example, the right to inherit and own property empowers women by giving them the ability to leverage their property as collateral for starting their businesses.

Togo has also made reforms toward gender equality through a 2012 revision of its family code.  Before the 2012 reform, only husbands had the right to choose the family domicile.  Now both husbands and wives have an equal right to choose where their family should live.  Married women are more likely to use formal financial products when they can choose where to live in the same way as their husbands, and in turn, have improved access to capital. Further, Togolese wives can now also object to the profession of their husbands, whereas, previously, only husbands had this legal right.

Compared to Congolese women like Madame Ngetsi, women in Cote d’Ivoire now have much more freedom and independence.  The women’s rights movement in Cote d’Ivoire has succeeded in securing a number of reforms over the past year.  Ivorian wives now have equal say with their husbands in choosing the family residence, are no longer barred from being legally recognized as heads of households, and can claim tax deductions for their children or spouses on the same basis as their husbands as the result of a sweeping 2013 reform to the family code.  In addition, both spouses can now stop the other from working if they deem it against family interests, whereas prior to the 2013 reform only husbands had this ability under the law.  While these freedoms and rights exist on the books, it will take coordinated efforts to empower women and to change the economic tides for women and the country.

It’s often said that empowering women is the solution to eradicating poverty in the developing world.  But how can women become empowered when the legal systems that govern the way they interact with the marketplace restrict their ability to become entrepreneurs and employees?  Recent reforms in Sub-Saharan Africa show that legal reform is possible – and is an important first step dismantling the various barriers to equality women face throughout the world.

As a proverb from Mali states: Doni doni kono be nyaga da.  Little by little, the bird builds its nest.  Changing the law may be just a basic step in the struggle for women’s social, political and economic equality, but it is a substantial step forward that can also significantly strengthen a nation’s economic growth.