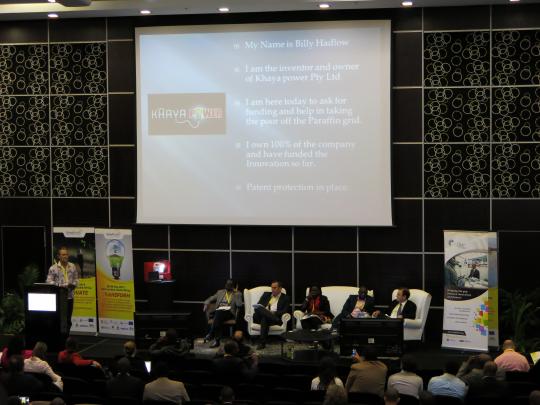 “You have a good social project, but it is not an investable company”, I heard fellow judge and technology activist Mariéme Jamme say to a South African entrepreneur who had just given his best business pitch. He was taking part in the Dragons’ Den at the 5th Global Forum on Innovation and Technology Entrepreneurship, a fantastic 3-day learning and networking event organized by the World Bank’s infoDev and the South African Department of Science and Technology. You could see the entrepreneur (let’s call him ‘B.’) gasping for air, and one could hear a pin drop in the completely filled auditorium of the Global Forum. Over 800 people, mostly entrepreneurs, financiers, policy makers and technology ‘evangelists’ from all over the world had gathered here.


I was in East London, South Africa on a stage, jointly with ‘Dragons’ Wesley Lynch, founder of AngelHub South Africa; Thomas Debass, Deputy Special Representative at the US State Department;  Mmboneni Muofhe, Deputy Director-General with the South African Department of Science and Technology and Marieme, who did her best to become as ‘popular’ as Kevin O’Leary (also known as Mr. Wonderful) on the ABC reality show Shark Tank, the US equivalent of the internationally acclaimed TV series Dragons’ Den.

Over the course of two sessions, we saw the pitches of twenty of the most impressive and inspiring technology-driven entrepreneurs from developing and emerging economies in front of us. I was pleased to see that almost half of them were female and about two-thirds from the African continent. Only five of the ‘Top 20’ could win a prize, which was the judges’ painstaking task. We rated the business ideas according to commercial potential, long-term success and impact on society. Before the entrepreneurs were thrown into the den of the Dragons, they had received training and mentoring by members of the infoDev team and a few accomplished investors. Many of them had clearly benefitted from these ‘boost’ sessions.

To tell the truth, I was happy to be a judge and not on the other side. Entrepreneurs had 3 minutes to make the pitch, and then we – the five judges – scrambled to ask our burning questions within 3 minutes. A powerpoint clicker that was off for a couple of seconds could already destabilize the pitching entrepreneur for a brief moment, and some tried to bend the rules by popping out a fantastic video at the end of the 3-minute interval. All the entrepreneurs had the heart-felt sympathy, applause and cheers of the hundreds of people in the audience. Despite the few ‘spiky’ comments by fellow judges, the atmosphere was positive and collegial.

I was deeply impressed with the quality and richness of ideas at the Global Forum.  As a judge, I was looking for high-growth entrepreneurs who found sustainable companies creating jobs, impacting positively on society. And we did find them.

After a one-hour deliberation behind closed doors, and an admittedly heated discussion, we agreed on the five best entrepreneurs with innovative solutions. The first prize was awarded to Thuy Truong, the impressive CEO of Vietnam’s Greengar for its fun and useful mobile apps for education. The second prize went again to a female entrepreneur, Stella Njoki Kariuki, of Kenya’s MPAYER for its application that enables financial transactions using mobile money as well as cash. Third prize went to South African Afroes for its mobile applications delivering positive educational messages. Runners up were Amant Antenna from Egypt for its novel cellular-based antenna technology covering multiple frequency bands, and Armenia’s MicroForester for an app that tracks reforestation projects. Aside from the prize winners, all the Top entrepreneurs invited to the competition were called on stage and received recognition for their achievements.

And entrepreneur ‘B.’? He wasn’t part of the Top 5, but he got a standing ovation from the cheering crowd as he walked on the stage.  He clearly won the sympathy prize. Country Director for Colombia and Mexico

Thanks for your interest, Xiaofeng. infoDev will keep in touch and will have regular follow-up with the prize winners and the finalists of the Top entrepreneurs competition.infoDev's first entrepreneurs ' competition took place in 2011, only two years ago. It is too early to tell how they are faring after a 5-year period. Anecdotal evidence tell us, that almost two-thirds of startups and fledging firms connected to infoDev supported incubation centers, accelerators, innovation hubs etc, survive past the first five years.

It's heart-warming to know what our products are welcomed globally, can't wait to the next Global Forum where Smartboard will be used widely :)

I have been trying to locate the presentations made at the Forum. I checked the forum's website to no avail. Can any one assist?

Silas: Thanks for your interest. The presentations and videos will be available at the end of this week on the Global Forum website: http://www.globalforum2013.co.za/programme.php

Attended the 5th Global Forum and find the Dragon's Den as the most exciting of all sessions. However, most of the countries that just started to promote high-Growth entrepreneurship did not make it to top 50, hence a clear indication that they are lagging behind. My question is: Has infoDev observed this? and if so, what is the plan to bring these countries especially that are interested to speed with others?

Thanks for your comment, Silas. We cannot conclude this. The selection methodology that we employed and the very small sample size prevent us from concluding that any correlation exists between high tech entrepreneurship promotion on the macro level and the results of the Dragons' Den at the micro level.
Through its hubs, incubation and innovation centers across developing regions, infoDev tries to stimulate high-growth entrepreneurship in low-income countries and emerging economies alike.

Thanks Angela for your reply. I am partially satisfied with your answer in terms of making a conclusion from your side. However, if I take an example of Namibia where I come from, supports available for high-tech are hard to find only recently there had been some efforts being woken-up thanks to the SAIS-infoDev Mobile Innovation Roadshow held in March 2013. One of the outcome of the roadshow was a sponsorship award received from infoDev for the winner to participate at the Forum.So, I think it is a need for a throughout assessment of the Macro level support at country levels.