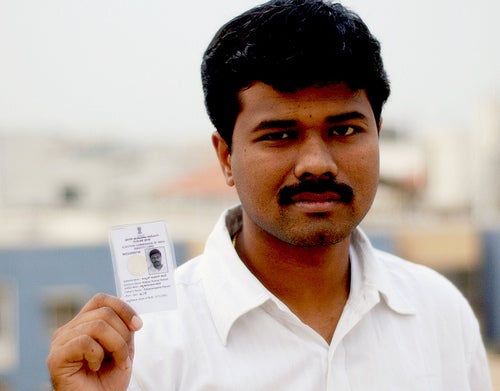 Wherever individuals are excluded from formal financial services the source of the problem is usually a lack of information. Without reliable information about a borrower’s identity or credit history, lenders will compensate for their inability to evaluate risk by raising collateral requirements, charging higher interest rates, or by refusing to lend to certain borrower groups altogether. This leads to financial exclusion, even among otherwise creditworthy borrowers. Technologies that reduce asymmetric information between borrowers and lenders are therefore some of the most powerful tools to reduce financial exclusion. In recent years, much progress has been made to improve credit reporting institutions around the world. But in many countries the challenge is much more basic: much of the world’s population lacks even the most basic identity proof. To address this problem, many countries have experimented with innovative solutions for improved personal identification.

The world’s largest effort at biometric personal identification is currently underway in India, where the Government of India’s ‘Aadhaar’ Program is assigning unique biometric IDs to all of the country’s 1.2 billion citizens by 2014, with an interim goal of 600 million IDs to be issued by 2012. Each Aadhaar ID is linked to an individual’s biometric data, including a photograph, iris scans, and fingerprints. Last week, Nandan Nilekani, co-founder of Infosys and current chairman of the Aadhaar program paid a visit to the World Bank in Washington to discuss the promise of the Aadhaar program.

The possibilities are definitely exciting: armed with unique biometric IDs 1.2 billion Indians will soon be able to verify their identity anytime and everywhere across the country. They will be able to document their credit history, link their ID to electronic payments and receive wage and welfare payments automatically. The implications are enormous, particularly for the equity and efficiency of government payments, where currently billions of dollars are lost in “leakage” across the myriad layers of India’s vast welfare bureaucracy.

Improved identification indeed seems to make credit markets more efficient. But are there caveats? Aside from consumer protection concerns, an important point to note is that Aadhaar is a very simple general purpose technology. It is not custom built to provide or process credit information, it is not tailored to process government payments. Aadhaar facilitates all those things, but in and of itself all that it does is to provide a unique, verifiable identification number. 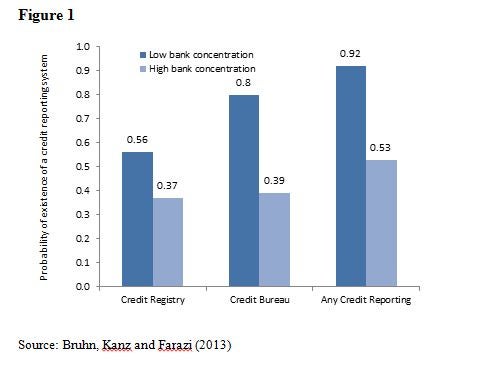 This approach is probably a good idea to ensure that Aadhaar remains a widely applicable, open access technology platform. However, it also means that the responsibility for collecting and exchanging credit information remains with banks and microfinance institutions. Experience has shown, that this is often a point where efforts to improve credit market transparency and access to finance run into difficulties. Banks and microfinance institutions often have an incentive to keep borrower information (particularly positive information) to themselves, because knowing who your creditworthy borrowers are and preventing them to take their business elsewhere is a profitable strategy. As a result, the emergence of effective credit reporting institutions that facilitate access to finance has often faced significant obstacles, particularly so in economies where bank concentration is high.
To illustrate this point, Figure 1, shows how much less likely credit reporting institutions are to arise in markets characterized by high degree of bank concentration. This pattern is something that universal identification, in the Aadhaar format, is unlikely to change, because it leaves the information monopolies that may exist in the market largely unaffected. What universal identification can accomplish is to lower the costs of recording and exchanging credit information. Figure 2 plots the relationship between per capita income and the coverage of credit information systems. It’s probably a fair guess that Aadhaar will succeed in moving India’s data point in the right direction on this plot –simply by making it cheaper to track credit information, monitor risk and bring more people into the fold of the existing credit information infrastructure. This may erode information monopolies and change incentives for information sharing over time, but it will probably do so slowly. 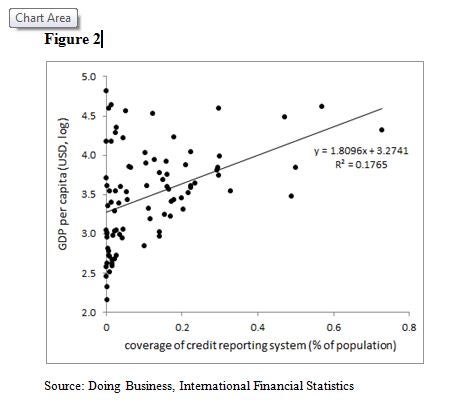 But even if Aadhaar is not the silver bullet that will solve all issues standing in the way of financial inclusion over night, it is a crucial first step. By making it easier to document one’s identity and financial track record, Aadhaar empowers wide segments of the population that were previously excluded from participating in formal financial transactions. In this sense, Aadhaar is not only a starting point for innovations that will enhance financial inclusion --it is also one of the biggest social experiments of our time. We can learn a lot from this experiment and it will be exciting see how a simple 12 digit number will transform markets and lives in the years to come. Aadhaar in my opinion will improve Financial Inclusion in India.
A similar experiment is ongoing in Nigeria (projected to be the 3rd most populated country in 2050) with the National ID Mgt Commission. A biometric based ID will be issued and a National ID Number issued. The 11-digit number will be the basis for KYC in the financial sector.
Lenders will be more comfortable with clients who have verifiable ID and can thereby build credit history.

Aadhaar does not have a single benefit. It has multiple benefits.

Aadhaar is an extraordinary Multi benefit asset which will improve the economy of a nation for sure!