This post is part of our Closing the Gap: Financial Inclusion blog series, which shares the views of selected experts and practitioners on different financial inclusion topics.

Depending on where you start, in 500 BC for Coinage or in 1000 AD for paper money, cash has been the undisputed leader in how people pay and get paid.  Sure, there have been innovations with credit cards in the mid-20th century, and an ever growing portion of money supply is composed of electronic value, but for most of the world cash is still king.

There are good reasons for this. Cash is simple, portable, anonymous, easily exchangeable at an agreed value by both buyer and seller and accepted nearly everywhere.  Yet, the physical nature of cash creates big transaction costs, and a wide range of security and transparency risks. 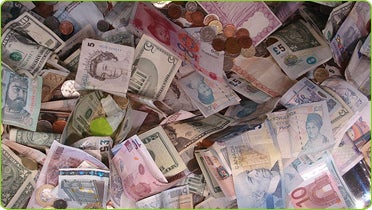 For all its positive characteristics, cash is often in the wrong place at the wrong time, and it is surprisingly hard to hang onto for very long.   For half the world we manage these barriers through access to formal financial services.  Yet for half the world’s adults and nearly 78% of the world’s poor living on less than $2 a day, the costs of these services prevent them from having something as basic as a bank account. If the poor’s financial transactions were in digital form rather than cash, many more financial services would become affordable and available.

For those of us living in the world of digital finance, it’s hard to imagine why living entirely in a cash world is a big problem.  Sure it might sound inconvenient, but perhaps it would make life simpler. Yet, for the nearly 2.6 billion people without access to a savings account, a cash world creates clear inequalities and crushing costs.  Living only in cash as nearly all poor people do, excludes them from the larger economy, and means storing the money in the home where it is readily spent or stolen.   Imagine how difficult it would be to be paid your monthly salary in cash and then have to sort out all your bills, mortgage and retirement plan.  Now think of a rural farmer in India or Uganda receiving all their income in a few months of the year and have to manage all the demands on those funds until the next planting season.  It is not that the poor are any less responsible than the rest of us; they just have no access to the tools the rest of us use every day.

There is a growing body of evidence that effective financial tools, available at critical times, can determine whether a poor household captures an opportunity to move out of poverty or weathers a shock without being pushed deeper into poverty.  Experimental evidence shows that even marginal improvements in savings tools can generate sizable welfare effects in some contexts.).  A study in Malawi showed that access to the right financial tools at the right time resulted in a 17% increase in household consumption. Another study in western Kenya found that women entrepreneurs who had access to a deposit account invested 45% more in their businesses.

The current system is also costly at the macro-economic level.  A recent study by McKinsey & Co., in India, estimates that moving from cash to electronic payments could reduce the cost of delivery for social welfare payments by over $18.3 billion.  This would be enough to nearly fund the country’s major food aid program for two years. The Consultative Group to Assist the Poor (CGAP) published a study citing Bolsa Familia, the Brazilian cash distribution program, which reduced its cost of payments from 14% to 2.6% of disbursed value by moving to electronic payments.

Realizing these benefits requires moving away from cash to a digital world. The digitization of publishing, music and communications has created new business models and channels that increase access and reduce delivery costs.  Shifting the bulk of the poor’s financial transactions into digital form is the catalytic change can strip the majority of cash processing costs out of the system and make ongoing costs predictable. This means that the shift to digital can pave the way for affordable and far-reaching services that directly address poor people’s needs.

Though moving from cash to digital has long been dismissed as impossible, we are seeing glimmers of hope that it can be accomplished.  The benefits of inclusion are too great and the inequalities too wide not to try.  Over the last decade, there have been dramatic increases in mobile coverage and penetration in developing countries (though material gaps remain among the rural poor and especially women).

According to a recent survey, mobile phone penetration is expected to reach 90% by 2014.  There are also examples of digital payment providers who have leveraged this technology to deliver remote payments (e.g., money transfers, government payments) to large numbers of poor people.  While M-PESA Kenya is a compelling example which now reaches over 86% of the population, there are many others.  For example, in the last 24 months Tanzania’s mobile money providers have opened more accounts than existed in the entire banking system.  There has been a recent wave of innovations in technology and business models that are making the delivery of small digital payments affordable, reliable and readily transferable. These developments provide a foundation to increase the number of poor people with access to formal financial services.

At the Bill & Melinda Gates Foundation, we’re working hard to understand these innovations in digital money, because we believe they hold the promise to increase transparency, improve financial access and help low income people get out of poverty and stay out of poverty.  The challenges that lie ahead are not trivial but the benefits to the poor and to emerging markets are significant and long-lasting.

Millions of the world's poor are unbanked. What can countries and citizens do to close that gap? Join the conversation by following our financial inclusion blog series or tuning into the Closing the Gap: Financial Inclusion event on Thursday, April 19 at 2:00 EST