The impact of investment climate reform in Africa: How has 'Doing Business' reform promoted broader competitiveness?

Sub-Saharan Africa’s (SSA) impressive growth over the past decade or so has been matched by its equally impressive showing on the World Bank Group's "Doing Business" index. In 2012, one-third of the world’s top reformers on the index were from the continent, and every year its countries feature in the top 10 most active reformers. In 2014, five of the top 10 were from SSA.

Doing Business tracks progress in reforms that support a firm through its life-cycle, from start-up, through to raising capital, to potential closure. Through a mix of wide geographic coverage and rankings that generate a lot of public attention (not all of it wholly positive), the report has been a powerful motivator of investment climate reform, with the data serving as a useful means to measure progress made.

Doing Business as a start
While a large appeal of Doing Business as a measure of a country’s business environment is that it focuses on tangible business activities to which the private sector and policymakers can directly relate, its indicators are limited in scope. They are therefore intended to be used mainly as a litmus test of the state of a country’s investment climate. Therefore, while Doing Business's accessibility and global profile can be very useful in generating momentum for private sector reform, it ought to mainly serve as a starting point for a country to then engage in both broader reaching and deeper investment climate change. (This approach to the use of Doing Business has largely underpinned investment climate reform efforts in SSA by the Bank Group’s Trade and Competitiveness Global Practice.)

Linkages to wider competitiveness reform data
One of the most comprehensive measures of the state of different countries’ business environments is the World Economic Forum’s (WEF) Global Competitiveness Index (GCI), a data set of over 110 variables that looks at the current state of, and tracks changes in, competitiveness across the world. The data set is structured under 12 pillars that cover measures from institutional development to technology and innovation.

Using GCI as a good measure of competitiveness, and interpreting changes in it as a reflection of a country’s effectiveness in engaging in wider competitiveness reform, we can look at the relationship between GCI and Doing Business and, significantly, the extent of movement on the two indices.

A high-level review of the relationship between changes in GCI and Doing Business for different regions between 2007 and 2013 shows SSA to have performed comparatively well on both indices, performing similarly to countries of Eastern and Central Europe and surpassing the world average.[1] However, looking beyond averages to GCI’s specific pillars, SSA’s performance has been variable, advancing as a region in some areas more than others. Figure 1, below, shows GCI pillars where SSA has improved the most and the least, highlighting the top and bottom three. 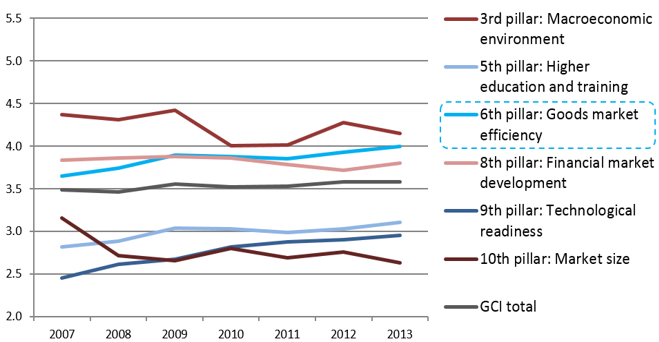 Of particular interest is Pillar 6, Goods Market Efficiency, because many of the areas that this pillar tracks are also areas where the Bank Group has focused its investment climate reform interventions, from business entry and competition, to taxes, trade and investment. (Two of the 16 indicators in this pillar actually comprise Doing Business data – the number of procedures and days required to start a business.)

Pillar 6 is one of the top three GCI pillars that have the greatest upward pull on SSA’s overall performance on GCI, countering the areas where SSA has slipped in its scores. 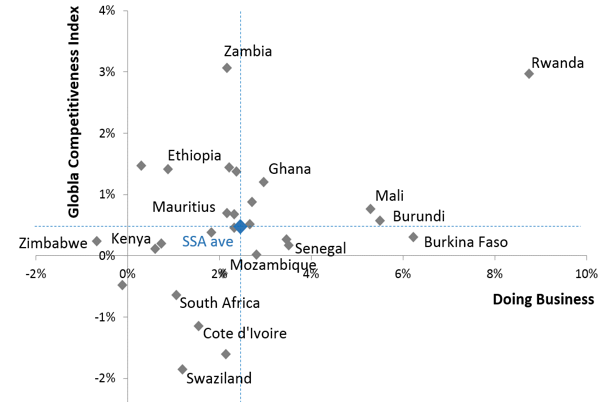 Investment climate reforms can lead to positive movement on GCI most directly though Pillar 6, particularly (although not exclusively) through business-entry reforms – the area of Doing Business against which countries in SSA have made the most progress. However, as the case of Zambia shows, Doing Business reform is not the sole means by which improvements can be made in investment climate-related measures of competitiveness. Other investment climate reforms also matter and drive positive GCI results. These are, therefore, areas toward which we are directing increased attention, building atop the momentum that Doing Business-focused reforms can generate to tackle some of the deeper, structural issues that inhibit SSA’s competitiveness.