In recent years, Nepal has made the headlines for the wrong reasons. In April 2015, it was shaken by a huge earthquake that claimed thousands of lives and caused country-wide destruction.  In previous decades, it suffered political violence and chronic instability.

Yet despite these difficulties, the country rebounded strongly with growth at 7.5 percent in Fiscal Year 2017 and was able to achieve significant progress in business through a series of seemingly modest yet important steps.

Over the course of four years, Nepal’s Ministry of Industry, the country's Office of the Company Registrar (OCR) and IFC’s Investment Climate Team implemented a series of reforms to encourage business registration online. In 2013, a new mandatory online registration service was launched. Help desks in the Kathmandu OCR office, extensive training for business owners, a media campaign, and an enabling legal directive eased the speed and efficiency of the registration process for businesses.

Within a short period of time, almost 100 percent of companies – as opposed to 10 percent during the initial phase of launch – were registered online. Registration became simpler, saving money for both businesses and the government. Online registration also addressed the challenges of the government's limited capacity and poor technology readiness through extensive training and peer-to-peer learning. The processes became more transparent with online file tracking.

In the year following the launch of the online registration system, Nepal’s ranking for "Starting a Business" in the World Bank Group’s 2014 Doing Business Report rose by 6 places. The number of days it took to start a business dropped by 45 percent and led to a 24-percent increase in the number of new companies registered annually. 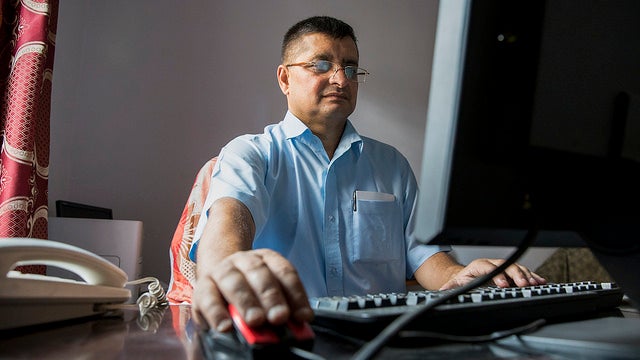 In Nepal, an employee of the Trade and Export Promotion Centre works on the Nepal Trade Information Portal. The portal, financed under the Nepal-India Regional Trade and Transport Project, provides information that traders need to import and export goods, including information on permits, laws and taxes. Photo Credit: Peter Kapuscinski / The World Bank

These successes produced broader lessons for Nepal and others facing similar challenges. These include:

Following the launch of the online business registration in 2013, additional technology solutions have continued to enhance the business environment and modernize the way companies do business in Nepal. These include:

Nepal is still fragile, and the country is still recovering from the earthquake that caused widespread devastation in 2015. But the economy has begun to recover. Steady growth and a healthy, more modern and more functional business environment has contributed to that achievement. Such rewards are what keeps Nepal's reform momentum going.

To learn more on the project, click on the links below: