Not Just 'Women’s Issues': Including Women in the Growth Agenda 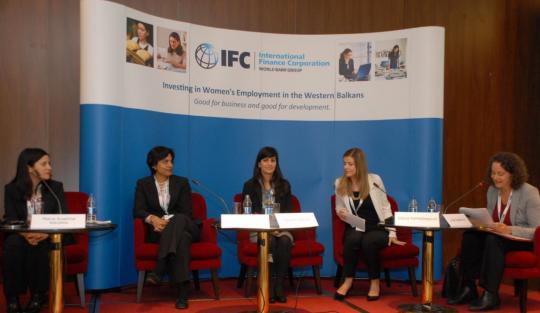 Panelists at the conference included Maria Eugenia Davalos of the World Bank Group; Yasmin Bin-Humam of "Women, Business and the Law"; Nasim Novin of IFC's Gender Secretariat; Dzana Ferhatbegovic of the Women's Empowerment Principles of the United Nations Global Compact; and Lisa Kaestner of the Investment Climate department of IFC.

It was an ironic beginning to the IFC-sponsored conference on Employing Women in the Western Balkans: With school cancellations due to heavy rain, the organizers feared lower attendance because women would have to stay home with their children.

Caring for children may still be seen as a woman’s role – but that doesn’t mean that child care is solely a women’s issue. “Initial estimates show that, in the Western Balkans, [the] loss of average GDP per capita is about 18 percent due to differences in the level of employment of men and women," said Tony Verheijen, the World Bank’s Country Manager for Serbia. In Serbia, 51 percent of working-age women are active in the labor market. The figures throughout the region aren’t more promising, with 42 percent in Bosnia and Herzegovina and 18 percent in Kosovo.

Conference participants identified discrimination on the part of employers, along with the lack of child care, as major barriers to women’s labor-force participation in the region. Women who want to work simply can’t. A representative from the ministry of labor in Montenegro pointed out that the government had recently changed working hours, but that day-care hours remained unchanged, leaving a gap between when day-care centers close and when women leave work, making work difficult. A campaign led by NALED in Serbia pointed out that, in the past, the amount of documentation and processing required in order to receive maternity payments was excessive and could be reduced by more than half, saving employers RSD 690 million annually (enough to employ 1,200 people!).

Women’s employment is a pillar of economic growth. How far would the industrial revolution have come without the armies of women who joined the labor force? Would the East Asian "tigers" have remained kittens without women?

These messages of history are not lost on all the policymakers of today. Recently, Shinzo Abe has identified women’s employment as a key to further unleashing Japanese growth potential and promised 200,000 addition day-care spots by 2015, and a further 200,000 by 2017.

Even the IMF is getting in on the action, pointing out that “better access to comprehensive, affordable and high-quality child care frees up women’s time for formal employment,” and that higher women’s labor-force participation boosts growth by mitigating the impact of a shrinking workforce; contributes to economic development through investment in families; raises the productivity of female-owned companies; and allows companies to make better use of the available talent pool with potential implications for economic growth.

These are not “women’s issues”: They are issues of national economic importance, and it is high time that they made it onto the top of agendas of the ministries of finance and the ministries of trade and competitiveness. It is up to institutions like the World Bank Group to put women’s economic empowerment at the forefront of the economic development agenda – and that means putting matters of maternity leave, child-care provision and workplace discrimination at the top of the list, together with deficit spending and combatting corruption.

In fact, during last week’s Greater Than Leadership Program, sponsored by the World Bank Institute in Budva, Montenegro, policymakers from the region met and identified mechanisms to advance their goals – among them, greater economic participation by women. Let’s keep an eye on the region to see if they can mobilize public and private-sector support, and if they can create opportunities that these women want and that these economies need.