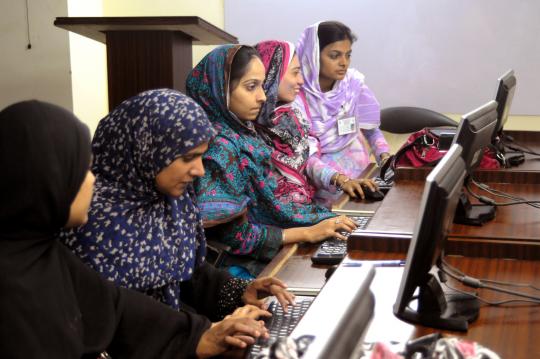 Pick any country in the developing world.

Where are the women entrepreneurs in Pakistan?

They start and manage digital-content creation firms serving international clients. They are sole proprietors of construction businesses bidding for government projects. They supervise tailors and embroiderers in windowless storage rooms that double as stitching units. They export high-end gems and jewelry around the world.

Women entrepreneurs in Pakistan lead cutting-edge, innovative businesses – but there are far too few of them. The recent Global Entrepreneurship Monitor report finds that only 1 percent of Pakistani women are engaged in entrepreneurship – the lowest proportion in the world.

Pakistan is not alone in its dismal ratio of growth-oriented (or indeed any kind of) women entrepreneurs. Even in the developed Asian economies of Korea and Japan, only about 2 percent of women are entrepreneurs. Sub-Saharan Africa does much better in this regard, with 27 percent of women, on average, engaged in entrepreneurship -- but they are mostly involved in low-productivity sectors of the economy.

Women entrepreneurs, in Pakistan and globally, have narrow networks of friends and family who provide them with some initial capital to start their small businesses, with little expectation of further financial support. Their export customers are located wherever they have extended family. And they rarely feature in local chambers of commerce activities.

Banks are often reluctant to extend lines of credit to, provide working capital to or lend to women-led enterprises. This makes it difficult for these enterprises to pursue growth. Perhaps this is why the average growth projections for women-led enterprises are seven to nine percentage points below those for their male counterparts.

On a recent mission to Pakistan to launch the first country pilot of womenx, a global program to support growth-oriented women entrepreneurs, we noticed a distinct contrast between the way men and women spoke about women entrepreneurs. Men almost always referred to women entrepreneurs as a dominant force in the traditional cottage industry and in micro-enterprises. Women entrepreneurs, on the other hand, described themselves as firmly grounded in the sector of Small and Medium-Sized Enterprises (SMEs), leading cutting-edge, innovative firms to leverage their education and experience. There was no overt gender bias in these conversations: Those descriptions are an accurate reflection of widespread social perceptions.

We have found in our research and interaction with women entrepreneurs around the world that they are smart enough to recognize and capitalize on valuable, profit-generating opportunities. But, too often, they lack information and expertise – to expand to new markets and products, enter supply chains, move up the value chain, or diversify into higher productivity sectors. Their growth is also hindered by unhelpful policies like restrictions on sectors in which women can work, laws that require permission from a male member of the family to gain access to finance, or discriminatory lending, among other things.

Time and again, we’ve seen that women seem hesitant to ask for help, and they seem intimidated by financial institutions and service providers. We think this is because social and cultural factors undervalue their efforts and because their access to resources is restricted. How can women entrepreneurs working in such conditions possibly be considered good bets by financial institutions?

The World Bank is pioneering a global program, womenx,  to overcome just these constraints. Its goal is to cultivate a pipeline of “investible” women leading high-productivity firms that can generate jobs, especially for other women. Two country pilot programs – in Pakistan and Nigeria – are already under way, and we’re aiming for another 10 to 15 pilots over the next five years. We will test experimental approaches to serve women entrepreneurs better: In Nigeria, for example, we are using an exciting, interactive online platform to make high-quality business education available to women at their own pace. And there are many more innovations to come as pilot programs are designed for other countries.

The new womenx program is a step forward in the World Bank’s bold approach toward addressing global challenges related to economic growth and shared prosperity. It is experimental, it is innovative and it has tremendous potential to leverage bank lending to unleash the exponential (thus the "x") growth potential of women entrepreneurs. As the program moves forward, there will be valuable lessons for scaling up and further program design, adding to our learning about what kind of support works best for women entrepreneurs.