'Understand clients': The major theme from a World Bank forum on microcredit 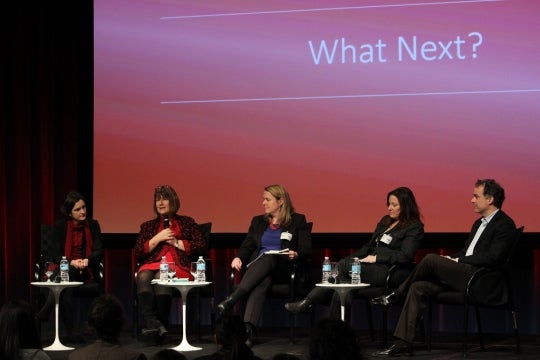 On Friday, February 27, researchers, policymakers, investors and practitioners joined forces to move forward in the dialogue around microcredit’s impact on the lives of the poor. Many themes emerged from the day, but perhaps the most salient came from Dean Karlan, who summed things up in 2 words: “Understand clients.”

The conference began with six presentations from researchers Orazio Attanasio, Abhijit Banerjee, Jaikishan Desai, Esther Duflo, Dean Karlan and Costas Meghir, who completed randomized control trials (RCTs) in six countries examining the impact of microcredit. Lindsay Wallace, of the MasterCard Foundation, noted, “These studies may not be new, but they are incredibly important.” While specific findings varied from country to country, the studies confirmed with evidence what many in the field already assumed: that, while microcredit can be good for some, it is no magic bullet for tackling poverty. 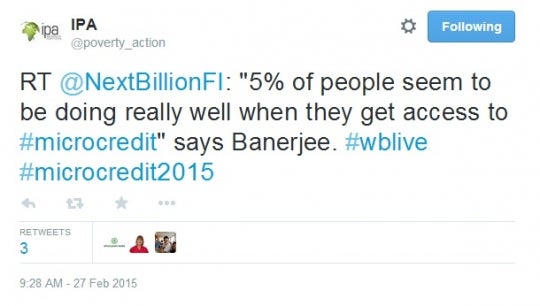 What’s critical to understand, said Greg Chen of the Consultative Group to Assist the Poor (CGAP), is that “building models around the basic core microcredit product will not continue to work.” Innovation is the key to achieving success in the field of financial inclusion. Choice and product design are two elements that came up in the core of the day’s discussions. “We want to design something that will be used,” said CGAP’s Gerhard Coetzee, in response to the assertion that, in the RCTs, the take-up of microcredit was relatively low. “Not everyone wants a loan,” explained Abhijit Banerjee. Monica French Cuenca of Compartamos added, “The empowered customer of tomorrow will have more choices,” hinting at the future direction of financial inclusion. 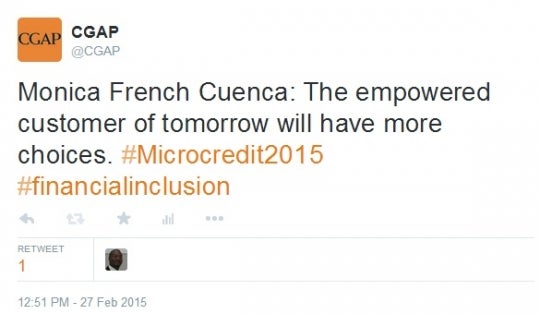 The Importance of Trust and Protecting Customers

Karlan added, “It's both exhilarating and scary that people can get a loan in five clicks on their phone.” While many agreed with Manfred Kuhn of Equity Bank that “pushing the boundaries is important,” every panel emphasized the importance of enhancing customers’ understanding of products as well as making customer protection a priority. Chen expressed this by asking, “How can we switch from a product-oriented dialogue to a customer-oriented one?” 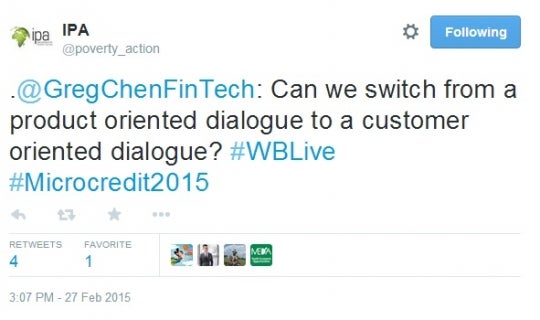 The Future of Research

Finally, many panelists underscored the importance of moving beyond microcredit RCTs to determine the impact of financial services on the lives of the poor. Dirk Elsen of Triodos said, “We have moved beyond microcredit,” and he urged researchers to broaden their scope and look at other financial services. Peer Stein of the International Finance Corporation expanded on this, asking, “With so much new data available, should there be new models to understand impact?” Mann also supported that idea, explaining that “as custodians of financial inclusion, our role is not to push products or to be cheerleaders of financial services, but to look at their actual impact.” 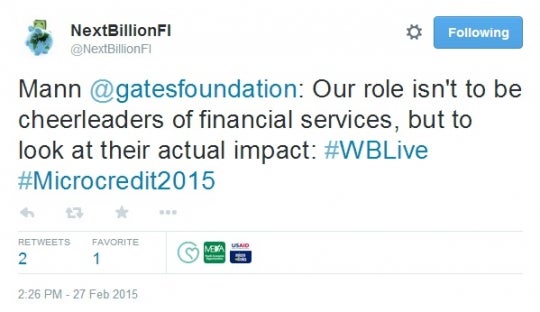 The World Bank Group and other global organizations recognize financial inclusion as a priority. Emerging evidence shows that developing inclusive financial systems is an important component for economic and social progress and that it can benefit poor people’s lives. This batch of evidence on microcredit is extremely valuable, but credit will not be the solution for most of the world’s poor.  Future research needs to integrate priorities of this rapidly evolving field by helping orient not only credit-product design, but also help answer many of the questions that are still unanswered on the different financial products, their interplay in addressing people’s needs, their contribution to financial inclusion and, ultimately, how they address poverty.

Watch the recorded video from this event >>
Read the tweets >>