Unlocking innovation in the Middle East through financial inclusion 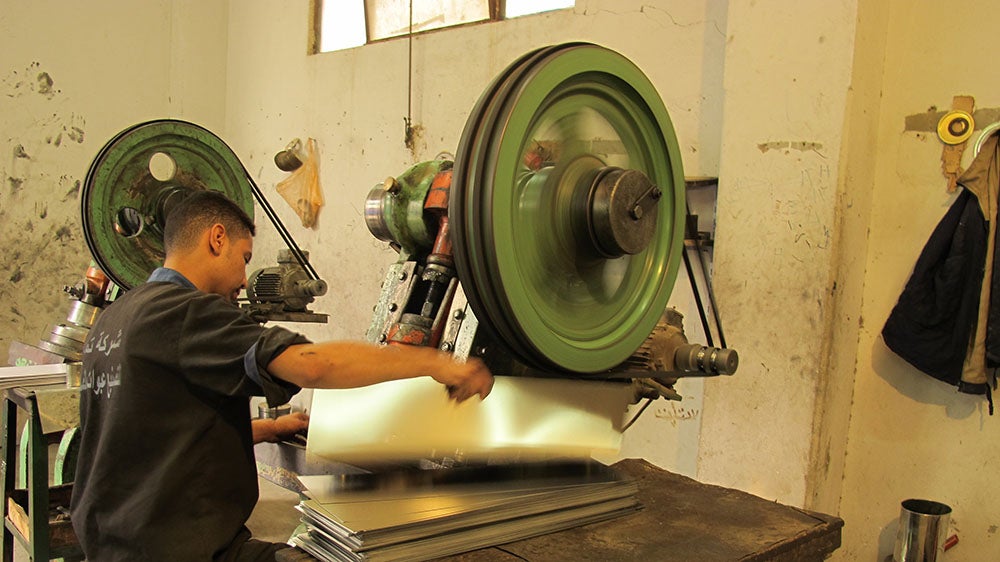 I recently attended an SME Conference in Jordan around SME Finance and Employment – extremely important issues in a troubled region.  All participants agree that much more needs to be done to address the lack of jobs in the region and to increase financial access at all levels, to individuals, households and small and medium scale enterprises (SMEs).

The Middle East remains the most financially excluded region in the world  despite being a middle income region.

Only 4% of unbanked adults in the Middle East say that they don’t have an account because they don't need one. In other words, it is clear there is widespread unmet demand for financial services.

When the World Bank conducted its first Global Findex survey in 2011, the Middle East had the lowest account ownership rate of the six World Bank developing regions (figure 1). Three years later, when the second survey was undertaken in 2014, the region remained stuck with that distinction despite having the greatest room for improvement.

A new Findex policy note looks at access to financial services and financial inclusion in the Middle East in more detail and shows what’s at stake. The Middle East in this instance includes Egypt, Iraq, Jordan, Lebanon, the West Bank and Gaza, and Yemen. 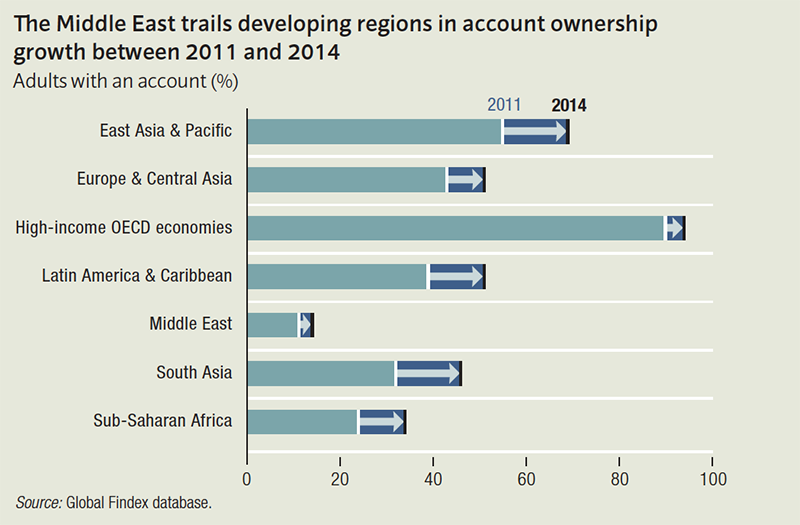 Even more troubling is that the region has extremely unequal account ownership as women, the poor and young people are excluded in large numbers (figure 2).

Today, 19% of men have an account compared to just 9% of women.  Account ownership among women remains basically flat even as it rose by 4 percentage points for men, leaving the Middle East with the largest gender gap in relative terms. Adults in the richest 60% of households in the Middle East are more than twice as likely as those in the poorest 40% of households to have an account.  Young adults are almost totally excluded from the financial system; only about 8% of 15-24 year-olds have an account, which is mostly unchanged from 2011.

Contrary to what might be expected, religion isn't a major cause of financial exclusion; just 15% of unbanked adults in the Middle East say they don’t have an account because of religious reasons. While this is three times the global average, other factors play a much bigger role.

Poverty, mentioned by 77% of the unbanked in the Middle East, is the biggest issue both regionally and globally.

About 30% of people say accounts are too expensive.

The Middle East countries need to address these issues in order to tackle a lack of employment and economic opportunities, and disillusionment among their youth.

We've seen that financial access can unleash the creative and innovative powers of the region's incredible talent  base. For example, against all odds, young Jordanian entrepreneurs established Maktoob, an Arabic language search engine which Yahoo purchased for $164 million.

With some support, and a greater focus on making financial services available to a larger share of the population, we could see the rise of many, many more Maktoobs.

The World Bank has made substantial efforts to ensure that SMEs obtain access to finance over the past six years – with large line of credit operations in Egypt, Jordan, Tunisia and Morocco.  In addition, the MENA region is piloting early stage innovation (pre-bank financing) models in Lebanon and Morocco – in an effort to help those early stage innovative start-ups that are most likely to support the crucial job creation agenda in the region.

This work draws heavily on the analysis undertaken by the Global Findex team at the World Bank. Click here for their must-read policy note on financial inclusion in the Middle East.