When Business Gets Personal: How Laws Affect Women's Economic Opportunities 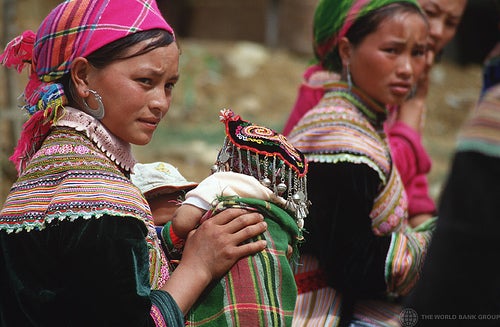 12-12-12 marks an auspicious day on which couples are rushing to get married. Globally, many women and men have been waiting for this day to mark as the day they got married. Those who miss it will need to wait 100 years to have another chance like this one again. But depending on where in the world they are, getting married will mean different things for these women, their career and future business opportunities.

In many economies around the world women are legally prevented from conducting basic transactions which are necessary precursors to entrepreneurship and employment. Women, particularly married women, can be barred from actions such as opening bank accounts, determining where to work or live, and having the ability to move freely. In some economies married women need their husbands’ permission to carry out such actions.
Historically, such laws were fairly common. For example, in Germany before 1957 husbands could terminate their wives employment contract if her work interfered with her duty to run the household and look after the children. And until 1976, the wife’s employment remained permissible only if it was compatible with her matrimonial and familial obligations.  In Lesotho, as recently as 2006, married women were considered legal minors rendering them unable to sign contracts or enter into any legal obligations.

While many economies have reformed such gender restrictive laws, they still remain in place in others. Today, the World Bank and IFC’s Women, Business and the Law project released a note on Mapping the Legal Gender Gap in Accessing Business Environment Institutions, which examines the extent to which legal provisions restricting women’s capacity to act in and access the business environment still exist. Drawing from Women, Business and the Law’s Accessing institutions indicator the note explores gender differentiation in a series of 10 different business related transactions that women may have to carry out in order to earn an income. Specifically, the indicator measures the legal capacity of married and unmarried women to get a job, register a business, sign a contract, open a bank account, choose where to live, get passports, travel domestically and abroad, pass citizenship on to their children, and become heads of households (figure 1).

Source: Women, Business and the Law 2012

For example, a married woman may legally require her husband’s permission to get a job, while married men do not need their wife’s approval in order to work. Unmarried women rarely face similar legal requirements in order to work. In fact, the data show that married women face as many or more legal restrictions as unmarried women, and that this loss in rights at the time of marriage occurs for women, but not for men.

Entrepreneurial women with innovative ideas and vision exist all over the world. However, in certain countries they may face specific legal constraints when it comes to pursuing their entrepreneurial goals. For example, in Cameroon, Chad, Congo Dem. Rep., Gabon, Guinea, Mauritania, Niger, and Sudan, a woman is allowed to exercise a separate profession if her husband does not object. Such laws often state that the husband’s objection must be based on the interest of the family. This derives from a previous version of the Napoleonic code which, by virtue of France’s colonial history, was incorporated into the laws of its former colonies.

Change is still possible however, as evidenced by Côte d’Ivoire and Togo, both of which recently struck down such provisions in their laws. In the Middle East and North Africa, a woman may lose the right to maintenance from her husband (i.e. provision of basic necessities) upon divorce if she has worked without his permission, as for example in Jordan and Syria. In Iran, Kuwait, and the United Arab Emirates the law allows a husband to prohibit his wife from working outside the home if he deems it against the family interest.

Women can face legal restrictions when it comes to traveling in support of their businesses. Married women require authorization from their husbands to travel outside their homes in the Islamic Republic of Iran, Saudi Arabia, Sudan and Yemen. These economies also require married women to obtain permission to travel internationally.

Women may also face challenges when it comes to managing their finances. In fact, in some countries married women only gained the ability to independently open bank accounts in the past 50 years. In France, for example, until 1965 banks were required to notify husbands when their wives opened bank accounts if the wife did not have a separate career or separate assets. In 1965 the law was equalized, stipulating that each spouse had the right to open accounts in their own name and to freely dispose of the assets in those accounts.  Many former French and Belgian colonies that adopted the Code Napoleon reformed their laws on this topic as France and Belgium did, but in the Democratic Republic of Congo, wives are still required to receive authorization from their husbands for any legal act committing them to any payment to be made in person – which includes opening a bank account.

Today, we find that 48 economies still impose these types of gender differentiated basic legal restrictions. High income OECD and Eastern Europe and Central Asian economies have already implemented comprehensive reforms and no longer have laws restricting women’s access to institutions. A handful of economies in Latin America and the Caribbean and in East Asia and the Pacific have such restrictions, but the bulk of economies with such legal restrictions are concentrated in three regions: the Middle East and North Africa, Sub Saharan Africa, and South Asia.

With the right access, women entrepreneurs  can provide goods and services as well as innovation and employment. Whether women, married or unmarried, chose to start a billion dollar business venture, a corner store, or stay home and raise a family, the choice should be theirs and not one that is imposed by law nor restricted by government. Yasmin, thank you for this informative post on the different laws that affect women’s economic opportunities. Like you said, with the right access, women entrepreneurs can provide goods and services as well as innovation and employment. Providing women with the same opportunities and tools as men is essential to helping a nation develop. The Overseas Private Investment Corporation (OPIC) also sees the importance of providing funding to women entrepreneurs. In 2006 at CGI, OPIC agreed to provide a $100 million loan facility to Citi to help deepen funding for microfinance for the world’s poorest people. The commitment, which has since expanded to $350 million, has supported one million borrowers, 90% of whom were women. http://www.opic.gov/blog/impact-investing/at-u-n-and-cgi-u-s-highlights…

Dear Judith,
Thank you for your comment, and for the link describing OPIC's great microfinance initiative!

An insightful note entitled Mapping the Legal Gender Gap in Using Property & Building Credit was published here http://wbl.worldbank.org/reports/~/media/FPDKM/WBL/Documents/Notes/Lega… and summed up nicely in this blog post: Why Does the Legal Environment Matter for Women’s Access to Capital? (http://blogs.worldbank.org/psd/why-does-the-legal-environment-matter-fo…)

Im glad im here it is very informative blog specially on how entrepreneur women and its effect on our nation. Keep posting and thanks!