Women's Empowerment? There's a (Mobile) App For That 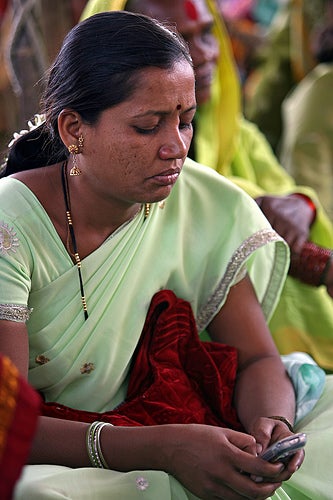 When I arrived to work for an NGO in Madagascar a few years ago, one of the first things I did was buy a cheap mobile phone and SIM, to connect with family and friends back home. Like many visitors to the developing world, I was struck by how many of the otherwise abjectly poor people I met also owned mobile phones. People who can afford very little nonetheless consider a mobile phone an essential item. And rightly so - I have come to see mobile phones as one of the most powerful tools for development, and in particular furthering development aims for women.

Not everyone agrees. Try fundraising for projects to get more phones in the hands of women of the developing world, and many people will think you’re mad. In this financial climate, individuals and countries have less money than ever to spend on aid – shouldn’t that all be going to things like increasing food production, medical care or skills training? But through a mobile phone, a woman can increase her crop yields, go through childbirth with less danger, or became an entrepreneur, because of her increased ability to access information, services and networks.

Mobile phones can provide women with new economic opportunities and access to new markets; they can break down some formerly insurmountable barriers to economic activity. For example, they enable women to combine work with family commitments, by reducing time pressures: communicating with customers by phone is much quicker than going to visit them and receiving mobile payments is quicker and safer than transporting money around to branch banks. Mobile phones are particularly useful in countries where there are restrictions on women’s mobility. Research on female entrepreneurship from northern Nigeria shows that while it would be inappropriate for a woman to meet with a male customer by herself, and it might be dangerous for her to travel to a particular area to see customers, with a mobile phone she can build and maintain these customer relationships anyway.

Mobile phones are increasingly becoming a delivery channel for services, and in many cases these business models are being pioneered in the developing world. The most well known of these is mobile banking. Mobile banking is a crucial part of what makes a mobile phone such a useful tool for female entrepreneurs and business people, by enabling financial inclusion. It gives women a new way to save money, transfer money, process small financial transactions and receive credit from micro-finance initiatives.

But other services are also springing up, such as mobile health. Across the developing world there are shockingly high rates of maternal mortality, often because of a lack of even basic medical information. New mobile services have arisen to meet this need, like the Grameen Foundation’s “Mobile Midwife”, which delivers timely health information by voice or text messages to pregnant mothers and their families before and after childbirth, in local languages. Other mobile services that benefit the lives of women are appearing in very diverse areas, from mobile learning packages to an app called NextDrop, which spreads information about the location of clean water.

There are other, less definable, benefits that mobile phones can bring to women in the developing world. The World Bank’s World Development Report 2012 focusses on gender equality and development. One of its four key recommendations is to “increase women’s voice”. Without wishing to make a pun, mobile phones are very effective in increasing women’s voice. Politically, they enable women to effectively form wide-reaching networks, in a way formerly precluded by limited mobility. They can also increase women’s voice within the household and prevent isolation within the family unit, particularly in patrilocal societies. In cases of domestic violence, a phone can act as a witness, by connecting a woman with the outside world. As one female survivor of domestic violence from Morocco put it: “in the past when your husband beats you, you seek help from your family who asks you to be patient, but now you can contact a legal centre which can make your problem known”. Despite these benefits, research by the GSMA mWomen programme shows that globally, women are 21% less likely to own mobile phones, rising to 37% in some regions.

Of course, mobile phones aren’t a silver bullet for gender and development – nothing is. Yet creating mobile services and apps for development can be cost efficient and can scale all over the developing world, since mobile operators run some of the most reliable and consistent infrastructure to be found in the world’s poorest countries. Many NGOs are involved in this area, but primarily the private sector is stepping up to the challenge, viewing mobile services as business growth opportunities, in which low margins are compensated by high volume. It’s my belief that they are setting in motion some great changes for women’s lives in the world’s poorest countries.