Postcards from Quito on the New Urban Agenda

More than two months have passed since the whirlwind that was Habitat III, the UN’s once-every-20-year summit on cities and urban development. From big data to climate change, public spaces to municipal finance, the conference truly seemed to have something for everyone. Long queues to enter the conference aside, what was striking was also the sheer number of young participants at the event, many of whom were students, planners and architects from Quito.

So what did people in Quito really think about the future of cities?  We asked visitors to the World Bank’s booth at the Habitat III exhibition to tell us, by writing on postcards, what they thought was needed to create sustainable cities for all. Of the more than 200 postcards received, several recurring themes were clear: 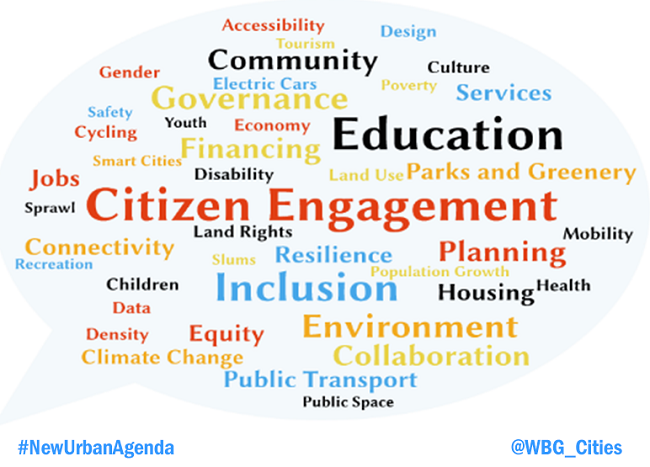 First, cities need to be inclusive. A large number of responses centered on the “right to the city,” an idea which has resonated strongly in Latin America and received considerable attention at Habitat III. Cities must exist for everyone, regardless of age, social standing, gender or physical ability.  Themes such as citizen engagement, affordable housing, land rights, the protection of vulnerable populations, and education resonated too, with calls, for example, to “provide space for all members of the community to participate” in the planning and development of cities. Medellin, once a crime-ridden, divided city, is a source of inspiration in this regard, having adopted a people-centric planning approach to transform itself into an innovative, inclusive urban center. The city’s metrocable system has significantly improved mobility for residents in its barrios (informal settlements developing on the city’s hills), and which—together with the development of iconic public services and amenities in its poor neighborhoods—has been credited with enabling greater social inclusion and reducing crime and violence. The need for secure land tenure was also seen as an essential part of the right to the city—a nod to the fact that 70% of the world’s population still does not have access to proper titling or land demarcation.


Second, cities have to work—services and infrastructure have to be financed and provided to meet basic needs, residents must be kept safe, and city governance has to be kept strong. People want cities that are easy and safe to move around in, with good connectivity and access to jobs and services.  While many choose to live in cities to be closer to economic opportunities, access remains limited in the absence of well-planned and implemented connecting infrastructure, and the situation is further compounded when poor people can only afford to access land and formal housing at very remote locations from city centers and where jobs can be found. Nairobi provides a case in point—42% of residents walk to work and as a result they can only access 8% of the jobs in the city in one hour of commute, while the 28% who rely on informal minibuses or matutus can only access 14% of the jobs in one hour given the high congestion and poor infrastructure. Quito, which has already seen its successful Bus Rapid Transit system face issues of overcrowding, aims to address this issue with the upcoming Quito Metro, which will eventually put commuters within reach of an estimated 760,000 jobs.

Third, cities have to be livable. Key themes here were public space, public transport, urban greenery, and good urban planning. People want cities that are vibrant, filled with greenery and public spaces  that are open and accessible to all. Cities such as Seoul and Singapore continue to show how planning and design can keep urban areas livable  despite increasing density, with the restoration of the chyeonggyecheon stream as public recreation space in downtown Seoul, and the thoughtful design of Singapore’s public housing estates as examples.

Finally, cities must be resilient in the face of climate change.   Given the April 2016 earthquake in Ecuador, it was no surprise that the need for resilient cities and infrastructure was widely raised. Indeed, cities worldwide are placing a growing emphasis on developing plans for resilience, so as to better adapt to shocks and stresses. Rio de Janeiro, working with the 100 Resilient Cities initiative, has developed its own resilience strategy, which sets out to mitigate impacts of severe weather and climate change, cultivate flexible urban spaces and use the city’s resources sustainably. In line with Rio’s goal of becoming a global reference point for climate-smart, resilient cities by 2035, the city has adopted other sustainability-minded initiatives such as the Rio de Janeiro Low-Carbon City Development Program.

The real work of seeing Habitat III’s New Urban Agenda through has now begun, and we know that the challenges facing cities are immense. Writing about Habitat III, The New York Times observed what it called a “worldwide sea change” in this iteration of the event, one that involved “rejecting the glum, defeatist view toward cities and urban life,” which had been the hallmark of the first Habitat conference in Vancouver 40 years ago. Cities must ultimately work for the people who live in them , and as we continue to work with cities on their paths toward sustainable, resilient, and inclusive futures, it will serve us well to remember the messages from these postcards from Quito. Totally agree with four points above about what cities have to be. Its really good to see cities are to be inclusive regardless their gender, physical ability, age and social standing. For the case of Timor-Leste; having those points are great but often its only in the plan and can not be realize given that not enough state budget. When there is a budget to establish those infrastructure, but sometime missing attitude. People awareness to see treat those public infrastructure in a responsible manner is often missing.

The summary is quite concise. On the other hand, I feel some key concerns have been omitted. For instance,consideration about city slum dwellers. Lagos and recently Abuja are facing alarming slum expansion. It is important that while government plans slum upgrade, the residents be duly consulted and provided with workable options to aid their resilience.
Meanwhile, during the African Youth Conference on African Unity and Development scheduled for January 22-25, 2017 at Addis Ababa,under the auspices of the UN Major Group for Children and Youth, we are hosting a Side Event focusing on "The Role of Youth on the Implementation of the New Urban Agenda in Africa".
We would be happy to have a representative join us discuss.

Dear Unyime – Many thanks for your comment! We represented the voices we received from conference participants so we couldn’t add or subtract any topic. However, slum upgrading and ensuring everyone is included the decision making process is indeed an important issue we are taking seriously. You can learn more about our work on slum upgrading through this report and this story.