Resilient Communities: What does it take to curb violence in cities? 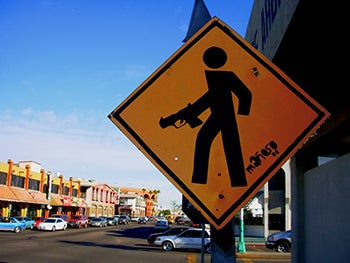 Photo: Make Noise not Art/Flickr
Almost five years ago in a discussion with urban experts from several Latin American and African countries, an important question was asked: how do we curb increasing levels of crime and violence in some of the fastest urbanizing countries in the world?

To explore this query, we embarked on a cross-country analysis of cities in West, Central and East Africa, seeking to not only better our understanding of urban fragility, crime, and violence, but also identify critical entry points to curb the challenges we would find. In the report Urban Fragility and Violence in Africa: A Cross-country Analysis, we explored one of the most recently relevant but less explored dimensions of fragility and violence in Africa: urbanization.

The world is urbanizing at staggering, unprecedented rates. By 2014, 54% of the world’s population was residing in urban areas. This number is projected to grow to 66% by 2050. Today’s large cities are concentrated in developing countries, with medium-sized African and Asian cities as the fastest growing urban agglomerations. People migrate fervently to urban areas with hopes of higher per capita incomes, increased employment levels, improved living conditions and well-being, and better chances to integrate into the national territorial economy.

Unfortunately, this promise has yet to be fulfilled in many cities. Often, the urbanization process is poorly managed and the mismatch between the growing number of migrants and the institutional and infrastructural capacity of cities is large. Experts argue that “the pace of urbanization, together with its sheer scale, is likely to stress national and urban institutions in many developing countries to their breaking point."

More blog posts
What can result are fragile cities with weak institutions and governance. Characterized by inequitable development and access to services, inadequate livelihood opportunities and much more, these “differently” governed spaces are often subsequently plagued by rising levels of crime and violence, which affects acutely the poorest and most marginalized parts of cities. Achieving the World Bank’s twin goals of ending poverty and sharing prosperity in these spaces will be increasingly challenging.

Since the projected trends of urbanization are ever increasing, we are underscoring the critical need to address urban fragility, and within it, crime and violence as part of a broader development strategy. From our experience at the World Bank, we know that there is significant value in multi-sectorial approaches, having reliable data that can inform policy, creating employment opportunities for youth, and building the capacity of national and local institutions, especially regarding security, justice, and job provision. All these are critical elements of curbing fragility and violence, as highlighted by the 2011 World Development Report on Conflict, Security and Development.

Translating these theories into action, the World Bank is bringing a multi-sectorial approach to a rapidly expanding global program on urban violence. A few examples include: Despite a growing number of projects working to mitigate the negative impact of urbanization, more is needed to address the complex challenges posed by urban fragility, crime, and violence in rapidly growing cities. Transferring experiences and knowledge across regions with rising threats of crime and violence, especially in poor and marginalized areas, will be key for supporting the growth of developing countries and increasing opportunities for people to contribute productively to society.
Topics
Fragility Conflict and Violence
Governance
Poverty
Digital Development
Urban Development
Regions
Africa
Latin America & Caribbean
Series
Sustainable Communities