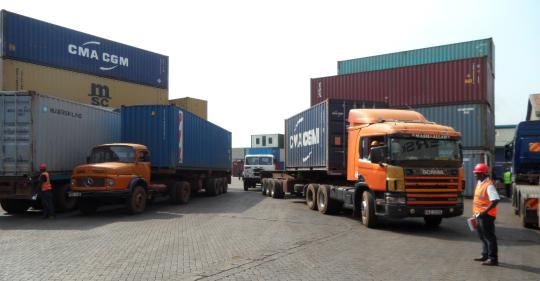 The breakup of the former Soviet Union left more than a dozen newly independent states in its wake. What were the top priorities for these newly-minted governments? Perhaps unsurprisingly, most of them got things started by becoming members of existing international organizations and acceding to international multilateral legal instruments, both rites of passage as symbolic as they are pragmatic for any new country. But they also got quickly to work establishing dozens of bilateral road transport agreements (BRTAs) with other nations. BRTAs, it turns out, form the bedrock of many countries’ transport and trade integration strategies, and they are the first type of agreement concluded in any initiation of foreign trade relations.  In other words, when it comes to trade, it all starts with road freight transport.

Road freight transport is so critical, in fact, that in most regions it accounts for more than 80 percent of trade traffic. Generally speaking, nearly all trade traffic is carried by road at some point along the supply chain, making it of critical importance to trade competitiveness. However, trade corridors with limited competition in road transport services face higher costs than corridors with more competition. This problem is exacerbated—and arguably even caused—by numerous regulatory and procedural constraints.  Therefore, recent strides in infrastructure and trade facilitation initiatives in developing countries must be accompanied by meaningful road transport services reform in order to reduce costs. And in the absence of full liberalization of market access, BRTAs currently exist as the primary instrument to pursue such reform.

The problem, as detailed in a recently released World Bank Study known as “QuARTA”, is that bilateral road transport agreements are all over the map, figuratively speaking. That is to say, they are largely inconsistent, unstandardized, vague, marginally enforced, and nontransparent. For the most part, their texts are unknown to their intended users; their objectives and limitations are often undefined, given the lack of a standardized template; their content tends to differ from content in other BRTAs regulating the same area; and their level of implementation is extremely difficult to assess. In short, navigating the BRTA landscape is a difficult and daunting task (Europe alone had at least 1,400 BRTAs in force in 2002).

These flaws exist because BRTAs have more often than not been used to achieve objectives other than what should be their true purpose: to promote and facilitate trade and transport between two countries, and to satisfy the real demand from traders, manufacturers, and transport operators. However, some BRTAs are concluded solely for political reasons, as a starting point to develop or improve the relations between two countries. In these instances, the economic and procedural provisions of the agreement seem to exist almost as an afterthought. Even when agreements do appear to have concluded with genuine economic intentions, the consequences can be counterproductive. Many BRTAs, for example, restrict the number of vehicles allowed to provide services between two countries, and the management of such quantitative restrictions brings with it institutions, procedures, documentation, conditions, and penalties for which the road transport industry ultimately bears the costs.

The purpose of the QuARTA study—which is shorthand for Quantitative Analysis of Road Transport Agreements—was to assess the degree of market openness between countries by analyzing the scope of their BRTAs and the rights they grant. Of the agreements analyzed in the study, the majority had “openness scores” in the middle ranks of the 0 to 100 scale used, with the least open agreements still containing enough positive elements to ward off a zero rating, and the most open agreements unable to meet the highly demanding requirements needed for an ideal 100 score. In fact, the average score of the 77 agreements analyzed was 47.59, with significant variation even among multiple agreements involving the same country. Kazakhstan’s BRTA with Pakistan scored 35, for example, compared with a high score of 79 for its BRTA with the Kyrgyz Republic.

The average results of the analysis are admittedly uninspiring to proponents of trade and transport efficiency and regulatory effectiveness. They highlight the lack of rhyme or reason that permeates the BRTA environment, where differing requirements for entry into the transport sector or compliance with its rules compromises the ability of service providers to optimize their operations and minimize costs. Furthermore, the QuARTA study’s findings suggest that countries negotiate more open BRTAs if their economic importance is less significant, suggesting a proliferation of agreements motivated more by political concerns than transport efficiency.

Without question, bilateral agreements still play a major regulatory role in international trade. However, for BRTAs to improve their effectiveness, they must be made more transparent, while keeping in the forefront the joint interest of facilitating border-crossing road transport operations. Transparency can be achieved by publishing the texts of the BRTAs, as well as transferring responsibility of the knowledge platform to the private sector. The latter practice has already been widely implemented in Europe, where professional associations of road transport operators are managing comprehensive agreement databases and providing access to their texts to members and stakeholders at large.

In addition, qualitative regulation of access-to-the-market conditions should be emphasized over the quantitative restrictions of market access currently in place. The Typology Questionnaire in the QuARTA study, for example, could act as a potential benchmarking tool for countries attempting to transform their BRTAs into truly qualitative regulatory tools. Such a transformation requires not only a major overhaul and simplification of frivolous technical requirements, but also a strong application of the principle of “freedoms”. That is, free trade in transport services; the seamless transfer of capital, setting up transport companies abroad; the smooth movement of carried goods across frontiers; and the application of most favored nation (MFN) standards to the benefit of international carriers and trade operators. After all, seamless international transport services are a necessity for the global production networks that are now so prevalent. Truthfully so, bilateral agreement should be on top whenever there is international trades. As well as customs clearance and brokerage for different nations have different standards and procedures. Great and informative article.
Land Transport Philippines