Building Metros in Latin America: Not all projects are created equal, but they all need strong institutions 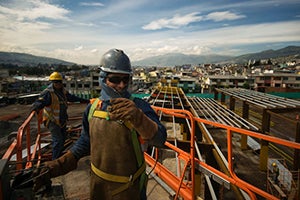 Construction of the Quito Metro
Representatives from international and local commercial and development banks convened in Bogota, Colombia at the end of March for the Second International Workshop to discuss the First Line of the Bogota Metro. Bogota is currently undertaking the engineering studies required to develop the metro project but the key question remains:  how to develop it in a manner that reduces costs, mitigates risks and maximizes benefits for users? Together with other Bank colleagues, I was invited to the workshop to discuss the procurement and financing models adopted in other urban rail projects in Latin America (see workshop presentations here). My main take away from the discussions is that although there is no such thing as a single recipe for success, there is one widely recognized essential ingredient: strong government institutions with the sufficient managerial and technical capacity to prepare, manage and supervise these complex projects.

Many cities in Latin America are embarking on new metro projects: the Panama City Line 1 project (the first metro system in Central America) opened for business on April 5, 2014; the contract for Lima’s Line 2 project, the first underground project in this city, was awarded on March 28, 2014; Quito is already building a couple of stations and plans to award the contract for the rest of its first underground metro line by the end of the year; Sao Paulo awarded Line 6 in November last year and will receive bids for the Line 18 project (monorail) on April 16, 2014.  These projects represent 100 km of new rail lines and more than $16 billion in investments. At the same time, recently-opened line 12 in Mexico City is currently in the news after being partially shut down in March due to premature infrastructure deterioration, negatively impacting a large number of public transit users. Indeed, by virtue of their size and complexity, urban transport infrastructure projects are inherently risky and demand thorough planning and execution of construction, maintenance and operational activities.

Both public and PPP approaches have advantages and disadvantages and they are both subject to the risks and complexities associated with underground construction projects. Fully-bundled PPPs allow the public sector to transfer certain risks to the private sector and to reduce the likelihood of construction-operation interface issues, but they also tend to be more expensive and difficult to structure and manage. On the other hand, although potentially less expensive, without adequate planning, public works contracts can lead to cost overruns and construction delays that are assumed entirely by government.

Experience shows that, regardless of the model chosen, it is fundamental for governments that embark on these mega projects to have a robust institutional framework from the concept stage and through implementation. Having a strong government team is critical for ensuring adequate project preparation and contract management if the project is delivered under a public works or a PPP modality. This government team should involve high caliber specialists with sufficient experience in various technical aspects: engineering, rail operations, urban transport, project management, finance, citizen engagement and communications and environmental and social management, among others. When thinking about the importance of this aspect for project success, I think about the experience of cities that have built their institutional capacity over time and learned from experience.  As a point of reference, the Metro Company of Sao Paulo has 764 employees dedicated exclusively to expansion projects and employs 89 staff with doctorates or master's degrees in relevant areas.

Not all metros are created equal, but they all require strong government capacity to deliver on the promise of improved urban mobility. The city of Bogota has taken on the challenge to develop a Metro project and it is working on building up the strong institutions required. Its successful implementation of the Transmilenio BRT system certainly gives me confidence that this will be the case.
Topics
Financial Inclusion
Financial Sector
Governance
Infrastructure & Public-Private Partnerships
Digital Development
Countries
Brazil
Colombia
Ecuador
Panama
Peru
Regions
Latin America & Caribbean This is a nice post! Do you have a database of funding sources and institutional arrangements for metro systems?
Thanks!