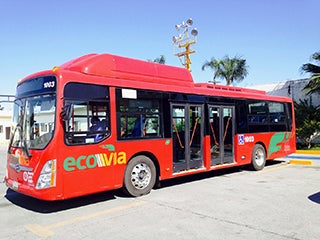 One of the shiny new Ecovía buses
Listening to Juan Ayala rave about how they only let the most talented bus drivers operate the shiny new buses on the Ecovía Bus Rapid Transit (BRT) system, we realized how fantastic our job is. Not only do we have the privilege to help plan and implement transformational projects such as Monterrey’s first BRT line, but we actually get to see the results of our work firsthand.

One should not underestimate the importance of Ecovía, a new 30-km BRT corridor crossing Monterrey from east to west. The original goal was to create a high-speed, high-quality mass transit system that could provide rail-like performance at a fraction of the cost. If the first six weeks are any indication, Ecovía certainly has achieved that. At 30 km per hour, the average travel speed of the BRT is close to double that of regular bus lines across the city; an influential local TV host found that end-to-end travel times on the system were over an hour faster than by private car; ridership levels are higher than what government expected for this still partial roll-out (35 of the scheduled 80 vehicles are operating); and in a recent survey, 75% of the sampled riders judged the overall system to be an 8 or higher on a scale of 10.

As Monterrey enjoys its first BRT line and starts planning extensions, it is worth highlighting five key transformations induced by the system: 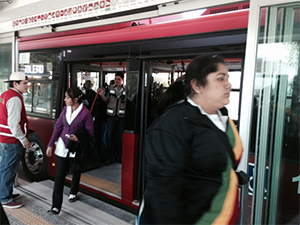 Level boarding at Ecovía
1. A low-cost, high-quality mass transit system enhancing the user experience. Ecovía is just the latest example of how the core elements of a BRT system – segregated lanes for buses, high-capacity vehicles, pre-payment at stations (not to slow down service while fares are collected) and level-boardings – all contribute to providing  users with a high-quality, fast public transport experience at a relatively low cost.


2. An integrated system, not just a BRT line. At two locations Ecovía crosses Monterrey’s rail-based metro system. In both locations, care has been taken to provide users with a seamless experience with both physical and fare integration. From an institutional standpoint, fare integration can be quite tricky, and Monterrey is no exception: fares on the bus system are more than double the fares on the metro system (11 and 10.5 pesos for Ecovía and other buses vs. 4.5 pesos for the metro); nevertheless, a free transfer system between the bus and metro networks has been implemented, and interchange stations have been carefully designed to facilitate convenient transfers. 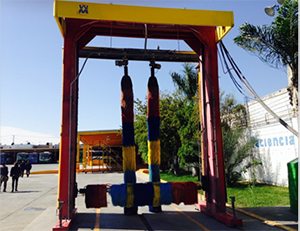 This bus washing facility cleans and reuses over 90% of the water
3. A transformation of the business model for operators. The modern fleet of Compressed Natural Gas (CNG) buses, with state-of-the-art “green” depots, and a control center that facilitates real-time dispatching and fleet control is higher quality, more environmentally sustainable but requires higher capital investments. In spite of those constraints, bus operators have embraced the new business model introduced by Ecovía as the higher capital costs are offset by reduced demand risk and lower operational costs. While worsening traffic congestion on the streets of Monterrey made traditional bus lines more expensive to operate and less attractive to users, the BRT’s segregated lanes ensure high productivity and lower, more consistent operating costs. Besides, it is important to note that Ecovía operators are paid by the system/transit authority primarily based on the distance traveled rather than the number of passengers carried - which means that they bear only a very limited portion of the demand risk and can enjoy a more stable revenue stream.

4. A transformation for drivers. As Juan Ayala, the CEO of the largest bus operating company explained to me, this system required a dramatic mentality shift among drivers, who went from being entrepreneurs maximizing fare box revenue on their vehicle to being service providers judged on the quality of the service they deliver to customers. The operators described a process whereby they selected the best drivers for Ecovía, then trained and tested them on a variety of fronts including eco-driving (ensuring lower fuel consumption and a more comfortable ride). 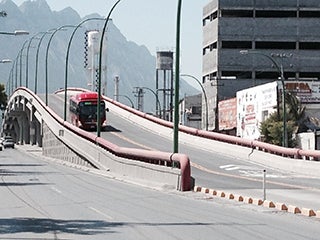 A new bus-only flyover on the Ecovía corridor
5. In the end, a reflection of the city’s changing priorities. Like many other cities in the north of Mexico, Monterrey is a low-density, sprawling, car-centric city. In the metropolitan area, the 400 vehicles per 1,000 people already account for 50% of all trips – while public transport has lost 5% of its ridership annually for the last 10 years. After years of building roads to accommodate economic growth and motorization, Ecovia reflects a deliberate move by the State of Nueva Leon to refocus its transport priorities. Two elements of the Ecovía system design highlight these new priorities:  first, three bus-only flyovers (see picture below) where a deliberate decision was made not to build concomitant car lanes to clearly prioritize the public mode; second, the decision to equip all the stations and vehicles with free Wi-Fi and air-conditioning. Decision makers wanted to design this system to attract car users who have a choice – and given Monterrey’s harsh summer, they felt that climate control was critical to provide a competitive travel experience for these users. 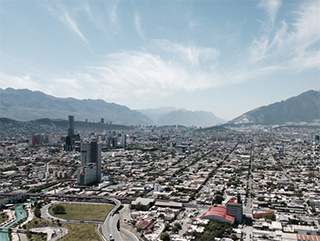 A bird's eye view of Monterrey
The World Bank has played a critical role in all phases of the project, from design through implementation. The detailed design was made possible by a World Bank-implemented grant from the Global Environment Facility, while public works and fleet acquisition were supported by the Bank’s Urban Transport Transformation Program (UTTP) for Mexico through IBRD and the Clean Technology Fund (CTF). Ecovía is still in its early days, and it would be expected that the system may see its share of growing pains – but its implementation is an exciting and major milestone for Monterrey, and for Mexico. It is also a significant learning opportunity for us in the Bank’s Latin America transport team – and we look forward to reporting back in a few months with news and progress on the system.
Topics
Climate Change
Transport
Urban Development
Countries
Mexico
Regions
Latin America & Caribbean