As discussions concluded at COP24, countries still struggle to translate their climate commitments into effective and socially acceptable actions. This sense of stagnation is particularly evident in transport. With 23% of energy-related GHG emissions coming from the sector, transitioning to greener mobility will be crucial to the overall success of the climate agenda. Yet the world remains largely reliant on fossil fuels to move people and goods from A to B. As shown in Sustainable Mobility for All’s Global Roadmap of Action, there are multiple policy options that could help countries move the needle on green mobility, each with their own fiscal and political costs. To illustrate this, let’s look at three countries that did take concrete measures to cut carbon emissions from transport but opted for three different options: France, Luxembourg, and Norway.

What these countries have in common

These three countries all have a high level of income, which means the majority of their residents can afford to buy and own a car. The governments of these countries have also invested heavily into road and rail systems—including France’s transformative high-speed railway network. This effort has significantly increased the number of people who have access to fast and reliable transport, and helped bridge the social divide between urban and rural areas.

But “universal access” is only one of the four policy goals to achieve sustainable mobility: efficiency, safety, and green mobility are equally important.  Now that the infrastructure is in place, and carbon-intensive cars and trucks are on the roads, the challenge for policy-makers is to figure out how we can reach these three other goals in a world where individual mobility has become a new “social right”.  In other words, which policies will be most effective for reducing the environmental footprint of the current mobility system (GHG emissions, noise, and air pollution)? 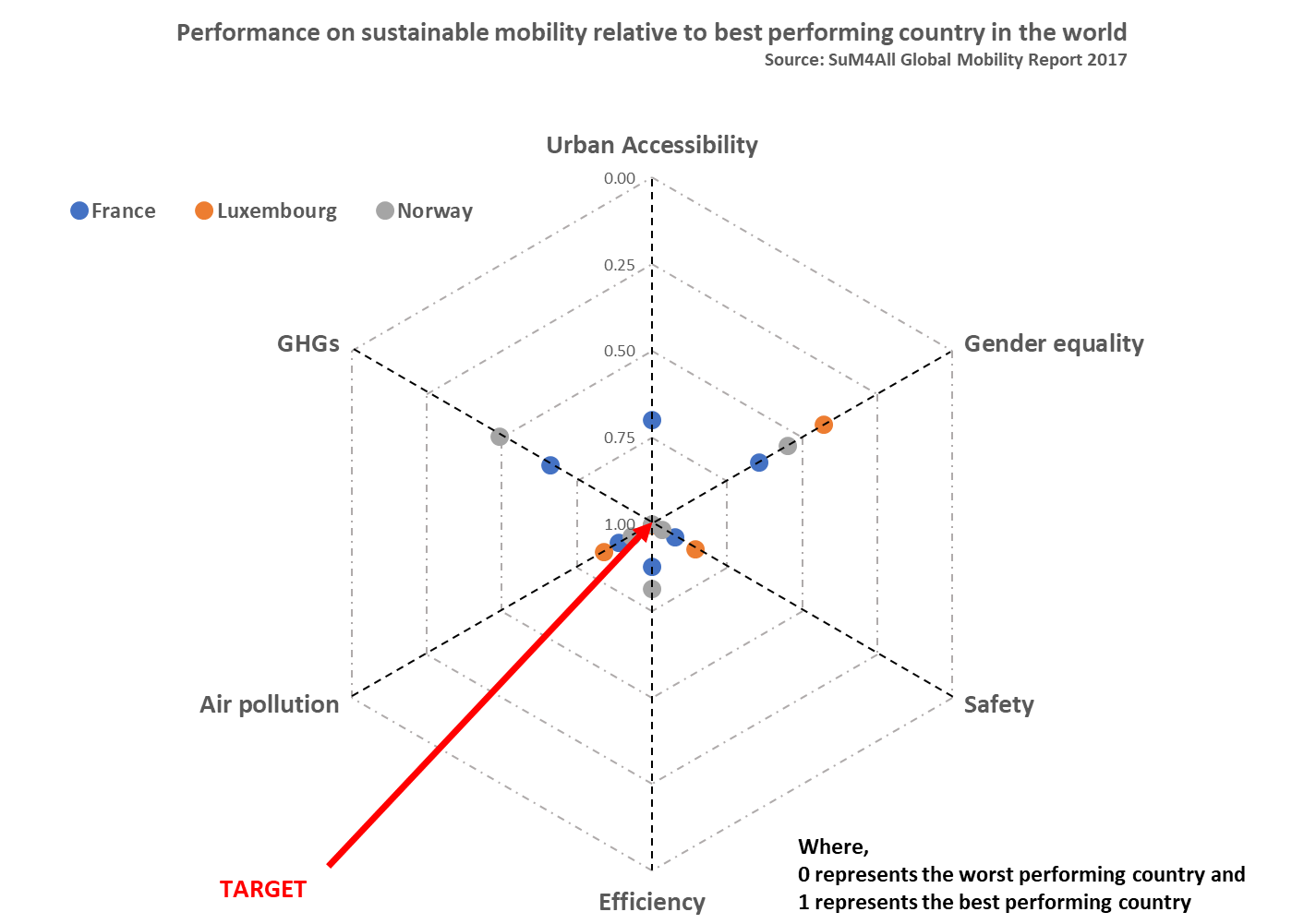 Across Europe, the road sector makes up over 70% of transport emissions. As such, reducing the number of cars on the road has become a key priority for decarbonizing economies. To make this happen, France, Norway, and Luxembourg have each come up with a different approach.

France: Curbing fossil fuel energy use through a fuel tax. In an effort to lead by example and walk the talk on the implementation of the Paris Agreement, the French government announced an increase in fossil fuel tax in late 2017, along with rebates for buying electric vehicles. The economic rationale for taxing vehicles using fossil fuel is pretty straightforward:  the tax is expected to cover for all negative externalities associated with car use, including carbon emissions, but also air and noise pollution, traffic congestion, and safety hazards.  The measure, however, was heavily criticized for constraining individual mobility—especially for low-income workers in rural areas. This is a reminder that the issue of social acceptability needs to be an integral part of climate policy.

Norway: Support for clean energy mobility. The Norwegian government focused most of its effort on promoting alternative energy sources in transport, with generous incentives for electric vehicles: zero import, VAT, and road tax; toll-free travel for plug-in cars; publicly financed charging stations, etc. As a result, Norway has the highest per capita number of all-electric (battery only) cars in the world, with electric vehicles representing 47% of the nation’s newly registered passenger cars in June 2018.  While the numbers are impressive, this model remains centered around the use of private cars, which brings with it problems like traffic congestion, noise, and air pollution.

Luxembourg: Free public transport. In Luxembourg, the government opted to invest in modes of transport that will hopefully reduce the use of cars: making all trains, trams, and buses free, which has important fiscal impacts.

These three policies may look very different; they have in common, however, the centrality of the car for individual mobility, promoting a model that emerged with the industrial revolution a hundred years ago.

Have ideas for innovative, ambitious policy measures that could help countries move faster and farther toward green mobility? Share your thoughts in the comments section below, or click here to find out how you can provide input on the Global Roadmap of Action Toward Sustainable Mobility!
Topics
Energy
Climate Change
Environment
Transport
Governance
Countries
France
Luxembourg
Norway