A simple technology with great impact on road safety

Originally, black boxes in airplanes perform routine gathering and storing of data on all airplane operations during fly time. In the event of a specific accident or crash, the log data can be analyzed to determine or clarify the causes of an incident.

A black box for cars is a video recording device with an acceleration sensor and a GPS receiver module. It can record any situation happening in front of a vehicle and store the information in the form of digital images into a built-in memory card. A vehicle’s black box is not a newly developed technology, but an application of existing video-recording technologies for the purpose of increasing road safety. This simple technology also has played a crucial role in solving or clarifying causes related to traffic crashes. Above all, the black box for vehicles has resulted in a decrease of traffic crashes, thus saving lives.

In South Korea, for example, taxi drivers first installed vehicles’ black boxes back in 2008. Since then, vehicle black boxes have been rapidly adopted by taxis throughout the country, under the sponsorship of local governments and insurance companies.

Black boxes’ impact
The result of this technology in terms of car accident prevention is evident when comparing data from 2007 and 2011: taxi-related traffic accidents declined by 17.7 percent over the four-year period. The death toll and the number of injuries also decreased by 18.9 percent and 19.1 percent respectively. During the same period, at the national level traffic accidents increased by 4.7 percent, the death toll decreased by 15.7 percent and the number of injuries increased by 1.6 percent. Thus the black box utilized by taxi drivers helped decrease fatalities and injuries from road crashes (see table below). 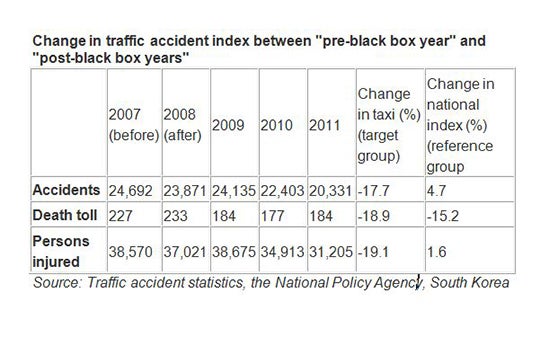 The exact causes of accidents
The black box provides a wide range of information related to traffic crashes, including the time of an accident, digital video images of surrounding area, speed and acceleration/deceleration of vehicles, exact accident location and recorded voice information. These are useful pieces of information because transport experts can analyze the causes of traffic crashes with precision, and suggest tailored solutions to prevent them. In the past, traffic crash investigators had to make inferences from statements of drivers (passengers, witnesses) and skid marks, as well as damages to vehicles, and other pieces of evidence.

Today, and thanks to this technology, we know for instance that 81 percent of child pedestrian traffic accidents in South Korea occur while kids are running. This kind of precise data would have been almost impossible to collect without the information from a vehicle’s black box.

Since achieving this important results in reducing traffic accidents, vehicles’ black boxes have been widely adopted in South Korea, and the Korean government has given priority to the use of Information Communication Technologies for improving road safety. The government also has provided policy incentives by recommending that owners of vehicles that use a black box should receive a 5-10 per cent discount in insurance premiums.

A vehicle’s black box then can be very useful in improving road safety in both developing and developed countries because additional infrastructure is  not needed for the implementation of this technology, and its potential investment cost is recoverable (total of 200-300 dollars) considering that vehicle owners can save in insurance costs over time.

Let us hope that this Korean experience can also help other countries improve road safety and save other precious lives around the world.
Topics
Transport
Countries
Korea, Republic of
Regions
East Asia and Pacific