Are billionaires good for growth? 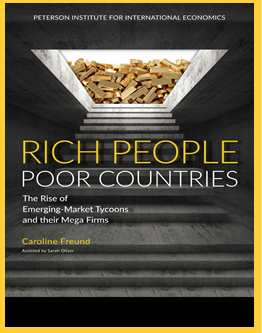 We are living in a world where the largest corporations are larger and the richest entrepreneurs are richer than ever before – and an increasing number of billionaires are based in emerging countries. Who are these tycoons and how important are they to their economies?

A new book by Caroline Freund aims to answer these questions by examining the characteristics and impact of 700 emerging-market billionaires whose net worth adds up to more than $2 trillion.

Rich People, Poor Countries: The Rise of Emerging-Market Tycoons and Their Mega Firms finds that very large firms are export superstars in their home countries.

In the United States the top 1% of firms account for 80% of exports. In emerging countries, the top 1% account for 50% of exports but that figure is rising rapidly, Freund said at a book launch at the World Bank’s Infoshop on March 23.

Emerging market firms include Alibaba, started by a teacher and 18 friends and now larger than Walmart and GE; Alibaba’s founder, Jack Ma, is the richest man in China, with an estimated wealth of $21 billion. Dilip Shanghvi started pharmaceutical company Sun Pharma with a $1,000 loan from his father; it’s now a $27 billion company and Shanghvi is the second wealthiest man in India, worth $12.8 billion. The Zorlu Group in Turkey, a major exporter of appliances, employs 30,000 people and accounts for 3% of Turkey’s manufacturing exports; founder Ahmet Nazif Zorlu is worth $2 billion.

Such entrepreneurs are part of a new billionaire class displaying the same kind of “capitalist skills” usually associated with advanced economies – innovation, creativity, and ingenuity, says Freund, a senior fellow at the Peterson Institute for International Economics and former World Bank chief economist for the Middle East and North Africa region. She estimates about a third of the mega-rich tycoons in emerging markets are “self-made” entrepreneurs who, like Ma, Shanghvi, and Zorlu, founded companies or are company executives.

She divides the other two-thirds into the following categories: people who inherited wealth; government-connected billionaires whose wealth derives from natural resources, privatizations, or other connections to the government; and finance and real estate billionaires.

The Middle East and North Africa is the only emerging-market region where the share of inherited wealth is increasing and entrepreneurship is declining, says Freund. Self-made billionaires in the region are highly dependent on resource-related and politically connected wealth.

Crony capitalism, in which the wealthy and powerful use political connections to distort government regulation and taxation, reduces productivity and harms growth, Freund says.

Overall, individual firms matter and large firms are good for growth, she argues. A large highly productive firm is more efficient than 1,000 smaller firms, and development is spurred when resources are drawn to the best firms.  “The emergence of rich people and rich companies in poor countries is a reflection of a healthy economy.”

Or, put another way, entrepreneurs and mega firms are the source of industrialization. Freund says it’s very hard to find examples of countries that got richer without the emergence of extreme wealth.

How to make sure extreme wealth plays a beneficial role? Freund recommends policies that could work: promoting entrepreneurship; limiting cronyism, and taxing less productive sources of wealth more heavily – such as inheritance.

This book – and Freund’s new database on the characteristics of billionaires -- is food for thought as we debate how to reduce inequality.

Emerging economy in the world is mostly driven by the Private Sector at about more than 65% of each particular country's economy. That constitutes those 700 Billionaires with US$ 2 Trillion net worth fortune.
Extreme wealth (Billionaires wealth) can play beneficial role if it becomes more inclusive. This inclusiveness can be by jobs creation and economic contribution through GDP Revenue and Taxes to particular Countries.
Provided that the Private Sector (Billionaires) in emerging economies constitute big proportion of economic driving force and ownership, more than 65%. This inclusiveness could remove the paradox of "Rich people poor Countries".

Hard working and successful people including Billionaires are good for the economy and the poors. People must know that if they work hard enough or are lucky they can get a decent living standard like any successful person (or Billionaire). It will help productivity and reduce demand for Gov't assistance (easy way out) instead of hard work. For instead, we, market innovators are asking ourselves why the World Bank has not have any market oriented leader since Jim Wolfensohn era. We feel hurt, may not contribute enough under the leadership of anthropologists (World bank CEO, US directors,...). It is a way it works.
Billionaire can help
Arthur Mboue

large companies may provide, employment, growth, and modern technologies which are crucial for human well being. But i think that small firms are more in tune with the sustainable development, by decentralzation of production process and localization of value chain. They use locally available resources, simple manufacturing/ production process, and local distribution of their products, thereby ensuring a complete circular movement of resources/value.
but when it comes to technology these small firms cannot compete with technologically advanced corporations.
it is not viable for small firms to produce certain products, which needs a large organizational set up and manufacturing units. eg.automobile industry, extractive industries. but there are products that they can produce sustainably and environment friendly. likewise for large manufacturing companies, they are capable of producing daily use products like food items, personal hygiene products with large economy of scale. But if the small firms/ informal sector are
encouraged to do the same, they can produce it more naturally and locally.
Large number of billionares in poor countries means the wealth is being concentrated in a few hands. but a large number of profitable, efficient and sustainable small firms in a poor country means, their economy is being developed from the bottom/base.
i feel that the future belongs to the informal sector/ small scale firms, which has the enormous potential to move towards a green path.