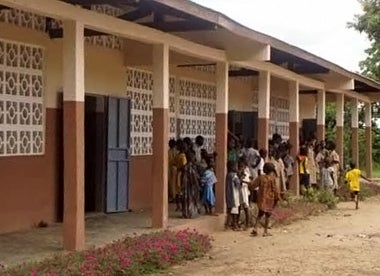 In community-driven development (CDD) projects, communities that have been given control over planning decisions and investment resources for development often decide to undertake small-scale infrastructure projects, such as rural roads, small bridges or schools. A project in Benin has demonstrated that schools built by communities can be built faster at lower cost than those built by outside contractors.

An assumption behind CDD is that communities with local knowledge of resources and environment are better positioned to figure out the best way to build their own public infrastructure in their interest. Indeed, there is some evidence that community-built infrastructure can be cheaper when compared to infrastructure built by government or outside contractors (for example, Wong (2012) introduces several cases of “CDD’s cost effectiveness as compared to equivalent works built through other government service delivery mechanisms”).

In this regard, the recently completed National Community Driven Development Project (“PNDCC” in French) and the Fast Track Initiative (FTI) Education project in Benin present just this type of “natural experiment.”

In these two projects, a large number of identical primary schools were built that had to meet the same government building standards – some built through management by communities and others by two large agencies hired directly by the government. This unique case permits a comparison at around the same time and under the same conditions.

Taking advantage of this “natural experiment,” an independent technical audit for PNDCC (2012) as well as comparative reviews under FTI (conducted during World Bank supervision missions in 2010 and 2011) found that for primary schools built by communities, the CDD approach delivered results “faster,” “at lower cost,” and “at similar quality levels” than schools built by others.

Faster results: In delivering a packet of classrooms during the same time period, the vast majority of PNDCC classrooms were more than 75 percent advanced and most were completed, versus the other two agencies where most classrooms were still less than half way completed at the time of the review in  October 2011.

Lower unit costs: Under the FTI reviews, unit costs for construction implemented by two other agencies were 45 and 29 percent higher than those constructed through community management under PNDCC: 71,400 or 80,100 FCFA (140 or 158 USD)/m2 for other agencies, compared to 55,500 FCFA (109 USD)/m2 for PNDCC. The PNDCC technical audit also found similar results; as shown below, unit costs for classrooms constructed through two contract management agencies were between 30 and 60 percent higher than those built through the CDD approach in PNDCC. Similar levels of cost effectiveness were found in the provision of school furniture (desks and benches).

Average or better quality: PNDCC construction quality was at least as good as the other two approaches, although there was room for improvement in all three programs. 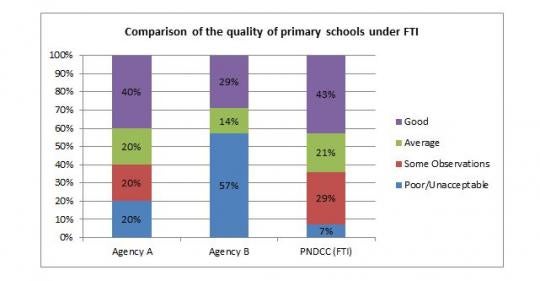 Spillover effects to the local economy: PNDCC tended to work with smaller, locally based construction firms. Field observations noted that this reinforced local small businesses, who acquired more competency and experience. By initiating a large number of sub-projects at the local level, PNDCC created temporary employment and increased competitiveness in the construction and public works sector in these areas, thus had positive spillovers on the local economy.

The Benin example strengthens the argument that community management can be a faster and more cost-effective way of delivering services to rural communities in need. Along with capacity building and implementation support, regular technical audits help ensure efficiency and technical quality.

Finally, it also stimulates discussions around why external contractors tended to be slower and more expensive. Observed reasons for the differences include additional costs from "middle-men," contract overhead fees, and lack of direct incentives to work cheaply and quickly.


This blog entry is based on an interview with John Van Dyck (Sr. Operations Officer in Africa Region Social Protection Sector, and the Task Team Leader for the PNDCC project) who provided insights and resources, as well as PNDCC Implementation Completion Report (ICR) (October 2012). PNDCC Project Website (in French): http://www.pndcc.org/public/index.php Now, someone is doing the right research, finally. With such practical, non-theoretical research, the days of public wastage may be endangered.
The problem, however, is how best this Community Development concept can be adopted in implementation of public sector priorities.
How can governments procure the services of the community? How will this aline with existing Public Procurement and Disposal legislation? Would World Bank (and development partners) allow such as a procurement or quickly declare such expenditure 'ineligible'? Would Development Partners consider an implementation system where the middle man is eliminated plausible? Would Development Partners take the risk of working with inexperienced Communities that use small local contractors who can not even afford bid security requirements let alone professional indemnity? What systems will be put in place to ensure value for money when dealing with thousands of communities simultaneously? Such are the bureaucratic bottlenecks.
The community structures also present a challenge: who in the community will be entrusted with the management of the project? Who will provide quality control?
No doubt: it has long been known, and now proven by practical research, that non-community players have a lot of wastage in resource utilization. We have to see how to work around the impediments to adoption of community approaches. If such an approach were adopted, many developing countries would be able to fund significant amounts of their Development budgets, which would in turn, transform into economic development.

Greeting of Peace!!!
we the subanon tribe member of the indigenous people in the philippnes have an ancestral domain claim which would like to avail your program suite to our areas, mostly our areas are rich in natural resources but lack development and not properly concentrated by the government.
we are hungry to economic benefits utilizing our resources but is not properly entertained by the government the needs of the IPs.
respectfully Yours;
Timoay WALTER D. TIMOL
GBS ancestral domian tribal chieftain
my address: Cocob Gutalac, Zamboanga del Norte, Philippines
g