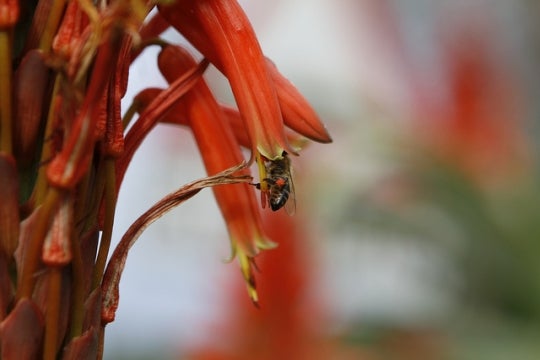 No, this blog post isn’t about what you think. It actually is about birds and bees. Mostly the latter, actually.

The dramatic decline in honeybee populations has received wide media coverage, and not just because it imperils honey production. Agricultural production is also at risk, due to the important role bees play as pollinators. In fact, the value of the services they and other insects provide for the main global food crops has been estimated to amount to $209 billion a year, or 9.5 percent of the value of total global agricultural food production.

In light of the challenges posed by the decline of honeybees – and while the jury is still out on what exactly is causing the decline – the resources farmers have at their disposal to maintain or boost their productivity levels bear thinking about. In fact, even absent this decline, an economic analysis of farming techniques seems appropriate given the profit-maximizing nature of most farm operations.

However, very little work has actually been done to look at natural ecosystems and the boosts they can provide to agriculture. Lora Morandin and Mark Winston of Simon Fraser University provide a notable exception in a couple of studies. The researchers calculated the significant economic benefits that the thousands of wild bee species – bees that are not kept by beekeepers – can have for yield maximization.

Studying farms that produce canola in Alberta, Canada, they found that crop yields are highest when sizeable cropland surfaces are left uncultivated to allow wild pollinators to flourish. A greater variety of wild plants allows for a healthier, more diverse bee population that can also pollinate adjacent planted fields. In the study area, farms that planted their entire available surface area with canola earned US$ 27,000, whereas those that left a third of the area unplanted for wild bees to flourish maximized yield and profit, at US$ 65,000.

Morandin and Winston’s research results illustrate that the natural capital that wild plant and animal diversity found in nature represent can carry significant benefits for agricultural productivity, yet these benefits are rarely systematically pursued. Doing so would combine modern and intensive farming techniques with a role for nature and the ecosystem services it provides. However, to benefit from such services, farmers and government authorities must actively protect or restore rapidly degrading natural landscape elements.

It is likely that diversity in other naturally-occurring insects and birds holds similar potential. The research findings illustrate that biodiversity-friendly agriculture and land-use planning are not just feel-good options, but also tools that can increase agricultural output, and therefore food production and farm incomes. They should be part of the toolbox of development options in the quest for economic growth and food security. More broadly, this example illustrates why we need more economic analysis of the hidden value of nature for development. The article provides yet another evidence for the contribution to food security by less understood, mis managed and undervalued ecosystem services- pollination. My only question now what actions will be now taken by the researchers who have conducted the economic valuation of this ecosystem service ? Valuation studies don't mean much if not supported through on ground measures at least in the study areas.

Thanks for your comment. The post is intended to foster outside-the-box thinking among agricultural practitioners. As for the World Bank’s activities, one possible response to the lessons from the research is an increasing emphasis on landscape approaches that seek to better plan and combine agricultural and conservation land uses. Such an approach, which seeks to foster a vibrant mosaic landscape, is being piloted in the Landscape Approach to Forest Restoration and Conservation Project in Rwanda, for example. It is further possible to encourage diverse landscapes in the framework of agricultural policies that promote set-asides, for example.